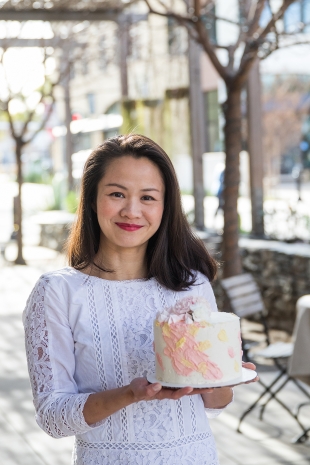 Melody Hu has infused her baking business with global elements that reflect flavors tied to her own history as a Taiwanese-American woman: mochi cupcakes, cakes and madeleines.

The Mountain View resident and owner of Petit Bakery Co. is planning to open a brick-and-mortar shop in Los Altos later this year.

Hu was born in Taiwan and moved to the Peninsula as a teen, graduating from Gunn High School in Palo Alto. As a University of California at San Diego student, she studied abroad in France. She returned to France after graduating and lived there for the next decade, working in the luxury watch and jewelry business in Paris and Shanghai.

Along the way, she worked as a freelance translator, including for her friend, English celebrity chef Rachel Khoo. Working with Khoo, she translated and edited cookbooks and became familiar with the recipe testing process.

"I got into the food world through the backdoor, in publishing," she said.

Working in the high-end jewelry business, she said she also learned about food by working closely with caterers and wine purveyors for events she organized. In 2015, she and her husband moved to Silicon Valley to raise their kids, now 4 and 6.

A fitness instructor with a mild sweet tooth, Hu has taught barre and pilates classes at the Palo Alto JCC and YMCA locations in Palo Alto, Cupertino and East Palo Alto. One day, she had a bag of sweet rice flour and decided to make a sweet rice dessert, like the ones she'd grown up eating.

The treat turned out well. So well, in fact, that when her husband tried it he told Hu, "This is so good you should sell it."

Hu wasn't sold on the idea -- she said she didn't want to "just stay home and bake." But there was something satisfying about it.

"It's a little bit of science and art," she said.

Baking is a lot like dancing, which she studied for years: it's an "ephemeral art," she said. Being an artist working with perishable delectations forces the creator to grapple with the critical question: What are people looking for right now?

So, starting in the summer of 2017, she got to work: Using a spreadsheet to track different variations and outcomes, she began experimenting with sweet rice flour recipes. To date, her recipes have been through hundreds of variations, she said.

Over the past year, as she's honed her recipes, showed up at pop-ups and baked wholesale for local cafes, she thinks she's come up with an answer to her driving question. People are looking for good food and for desserts that aren't too sweet, with options to meet dietary restrictions. They want the delight of food being presented beautifully and they want organic, local ingredients.

Her response: fusion pastries, blending Asian mochi with the American cupcake and cakes and the French madeleine cookie.

"I think that's very representative of who we are in California, and in the world. We're all combinations of different cultures, celebrating coming together at the table," Hu said.

Her creations, beyond being inclusive of different cultures, are inclusive for another reason -- they're naturally gluten-free, and some versions are also vegan, meaning that people with dietary restrictions can participate in the pleasure of patisserie.

Unlike other gluten-free bases, which she noted can be grainy and crumbly, the rice-based mochi texture gives her cupcakes a satisfying chewiness. They also have less sugar -- her Swiss meringue buttercream recipe, she says, has just enough sugar and butter to be silky-smooth, but a lot less sugar than a regular buttercream frosting. All animal-based ingredients in her recipes, she said, are organic. The glutinous rice flour creates a texture in Hu's cupcakes that is less bready, and more dense and chewy than traditional cupcakes. Combined with the elegant icing, the cupcakes are a surprisingly filling and rich treat.

At the end of 2017, she began to lease space at Studio Cake in Menlo Park on Monday nights and Saturday mornings for her wholesale baking. After teaching classes and wrangling kids during the day, she'd come to the kitchen at night, working through dark hours with only the music from her earbuds to keep her company.

She worked out agreements to sell her mochi creations at Cafe Zoe in Menlo Park and Nourish Cafe at the Palo Alto JCC, and pursued a growing circuit of pop-up opportunities, including at Stanford Shopping Center and at the festivals Facebook hosts at its Menlo Park headquarters. She ended the lease with Studio Cake at the end of 2018 in preparation to open her brick-and-mortar bakery this year and is no longer selling wholesale to local cafes.

Currently, she works out of her home kitchen as a cottage food operator and accepts orders online or by phone for delivery in the Bay Area. She said she's setting up her website to enable custom cake orders by the end of the month.

For more information, go to petitbakery.co.

Thank you for the terrific article! I wanted to add that in addition to all of Melody's cakes being gluten free and some being vegan, some of them are also Paleo. I recently moved from East Palo Alto to Zürich and wish I could come to her shop as soon as it opens.


I’m a very loyal Gunn alumnus so I will give it the old school try to help this entrepreneur out.

Mochi is Japanese.
Over the past 25 years, many pastry shops in Asia have melded Mochi and various gel glaze toppings, with adaptations of European / western cakes.
In Asia, these deserts are lovely to look at, but not really popular with the locals, and not rich and sweet enough for Western palates.
Good-luck - another Chinese bakery shop in the area.


Paleo is just another name for a very healthy California diet! Why the fancy name? Anyway, I hope this new bakery succeeds. Personally, I prefer a real french bakery. But good luck!

Report Objectionable Content
Email Town Square Moderator
2 people like this
Posted by Tatjana
a resident of Old Palo Alto
on Feb 11, 2019 at 5:19 pm

Having been fortunate to enjoy many of Melody’s creations, I’m overjoyed at her brave decision to open a bakery one could stop by. She is incredibly clever in her recipes and very skilled in the art of deserts, striking many flavorful notes with somewhat muted sweetness, a unique and highly addictive experience.

The first few seconds after awakening; before I remember the virus
By Chandrama Anderson | 0 comments | 2,875 views

Can you stay healthy without making more trash?
By Sherry Listgarten | 2 comments | 2,238 views

Think about helping others in our coronavirus-affected area
By Diana Diamond | 5 comments | 2,068 views