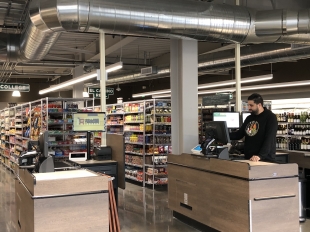 Owner Mark Khoury, who also owns The Courthouse 2021 restaurant in Redwood City, stands in the newly opened Khoury's Market on Jan. 11, 2019. He wants to form bonds with residents who visit as the market takes shape. Photo by Christine Lee.

After more than a year without a neighborhood grocery store, College Terrace residents now have Khoury's Market, which soft opened Friday in Palo Alto.

Khoury's Market, located at 501 Oxford Ave. at El Camino Real in the College Terrace Centre, is a full-service family market owned by the Khoury family. They expect to have 90 percent of the market filled by next week, owner Mark Khoury said. The market offers organic and regular produce as well as a full-service deli with salads, sushi, cheese and meat, and a hot deli with daily menu specials (such as "Taco Tuesdays"). There is no official grand opening set yet.

Khoury described the market as a family business that will treat customers like family.

"If someone asks for something and we don't have it, we will get it," he said. "We hope to be here for a long time with community support."

The family has been in the grocery business for 45 years. Mark followed in his father's footsteps and went into the business 25 years ago. They own a half dozen stores but only operate two, including Park Plaza Fine Foods in San Francisco.

Mark, who lives in his hometown of Sonoma and commutes, also operates The Courthouse 2021 restaurant in Redwood City.

This is not the first time the Khourys have operated a market in the neighborhood. Patriarch Joe Khoury and his family took over the space JJ&F had inhabited for more than 60 years at 520 College Ave. in 2011, after longtime owners and founders the Garcia family, sold the building. The Khourys replaced the long-beloved JJ&F Market with their own, but they were evicted in 2013 when the building was demolished to make way for the College Terrace Centre office, retail and housing development.

They expressed interest in returning to the new grocery site, which is located just north of the original location, after the centre opened in 2016. But a different grocer, the College Terrace Market, was selected. Its operators announced plans to close the market in December 2017 after about six months.

The Khoury family was brought in by Jason Oberman, whose firm, Blox Ventures, bought the blocklong development in July for $78.5 million.

"We are looking forward to re-connecting with old friends here as we open our market with locally sourced produce, meats and, of course, our enduring emphasis on service," Joe Khoury said when the family announced its planned move back into the neighborhood last August.

Good Deal, Looking forward to it.

Singapore's oldest cafe was about to open in Palo Alto. Then, the coronavirus hit.
By Elena Kadvany | 4 comments | 7,453 views

A Pragmatic Approach to A Trillion Trees
By Sherry Listgarten | 4 comments | 4,369 views

Repairing a Disagreement with your Beloved & “Physical” vs. “Social” Distancing
By Chandrama Anderson | 2 comments | 3,074 views