Editorial: From nine to seven 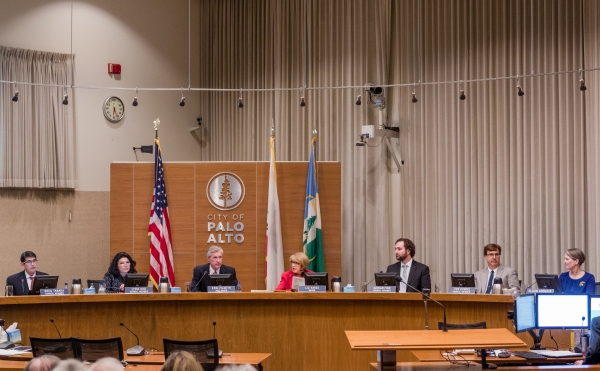 Only one new face will be on the dais at Palo Alto City Council meetings this year, but that belies the fact that dramatic and unpredictable changes are afoot for our city government and local politics.

Expectations, behavior and outcomes will all be impacted by the reduction of the council from nine to seven members, but how isn't at all clear. And in spite of having four years to prepare for the change, there are many undecided governance issues, such as how many council members will be now be required to initiate proposals or remove items from the consent calendar.

Council committees will now only have three members instead of four and representation on regional bodies will be more challenging. On the other hand, fewer members will hopefully mean shorter, more efficient council meetings and less political gamesmanship and posturing.

The size reduction is a result of a measure placed on the 2014 ballot on a 5-4 vote of the council and approved by voters 54 to 46 percent. The proposal emanated from a group of community members who argued the larger size provided few benefits and led to unnecessarily long meetings, excessive deliberations and burdens on staff caused by the need to be responsive to nine bosses. Their effort never gained much momentum or piqued public interest; voters appeared to be as ambivalent as the council that put it before them.

But at nine members, Palo Alto was indeed an anomaly.

In Santa Clara County, only Palo Alto and San Jose (which has 10) had more than seven council members. Nine of the 15 municipalities in the county operate with five-member councils and just five cities have seven (including Palo Alto.) Nothing, of course, compares to the 15-member council that Palo Alto had until the 1960s, when voters approved the gradual reduction over three election cycles to nine members.

Fortunately for stability purposes, the timing of the just-completed reduction means that the new seven-person council will continue to be politically divided almost exactly as was the nine-member council last year. Neither those who support greater limits on growth nor those considered more amenable to new development gained or lost ground as a result of the size reduction.

Monday night's first meeting of the new council featured warm welcomes to newcomer and top vote-getter Alison Cormack and the commencement of the second (and last) four-year terms for political allies Eric Filseth and Tom DuBois. Cormack instantly becomes the potential swing vote on any politically polarizing issues coming before the council, but on Monday night the talk, as it usually is on day one, was about working together to solve city problems.

There was a clear desire expressed by most council members to begin the year on a more congenial and positive note, reflecting awareness that their interactions in the past few years have created unhelpful divisiveness and avoidable personal animosity.

And there was no drama or surprise in the election of Filseth to mayor or Adrian Fine to vice mayor. The fact the two come from opposite political camps may reduce tensions and improve meetings. While DuBois had seniority over Fine by two years, he knew he didn't have the needed four votes and wasted no time in supporting Fine. Only Lydia Kou voted against Fine after DuBois declined her nomination for the office.

Fine, who at age 32 is the youngest member of the council, politically has the most at stake in 2019. How he performs in his vice-mayor role, particularly in developing the leadership and communication skills needed to build consensus on a split council, will determine whether he wins support for becoming mayor next January and ultimately wins re-election in next year's council election, should he choose to run.

But more important than council politics in the coming year will be stabilizing and solidifying city operations. Newly appointed City Manager Ed Shikada must fill a large number of senior level staff vacancies, including the planning director, chief financial officer, chief information officer, chief transportation official, utilities director and fire chief, and navigate through many high-profile issues. Most consequential and imminent is how the city resolves the future of road crossings over the Caltrain tracks.

Shikada is fortunate to have Filseth, an experienced technology executive with a strong financial background, to work with as mayor during his initial year. Filseth will be the least political and ideological mayor the city has had in many years, the perfect choice to help guide the transition in management and to lead the new smaller council.

This I’ll advised reduction was entirely political in order to consolidate power in fewer hands. Those fewer hands over time are far more likely to represent moneyed interests over those of residents - just look at the history. This reduction was “justified” by saying it would reduce the length of meetings and other cities got by with fewer Council members, but what it actually does is reduce the robustness of democratic representation in our city. We now have fewer elected representatives, less opportunity for diverse views on Council, less representation on regional commmittees, etc.

9 people like this
Posted by Need to Re-balance
a resident of Another Palo Alto neighborhood
on Jan 11, 2019 at 5:41 pm

Palo Altans who care about holistic civic responsibility in the face of overdevelopment pressures really ought to get together and recall anyone who engaged in "misleading the public" in their campaign disclosures re: development money, especially Kniss and Fein. That would give those trying to govern for all of Palo Alto a reprieve from the overrepresentation of the overbuilding crowd.

12 people like this
Posted by Need to re-balance
a resident of Another Palo Alto neighborhood
on Jan 11, 2019 at 5:42 pm

The FPPC isn't really much of a watchdog -- the fact that they were willing to say Fine misled the public is about as strong as it gets. Public: the ball is in your court. That should be grounds to recall him.

There has never been a residentialist majority (Burt never was one). We need it for balance.

A Pragmatic Approach to A Trillion Trees
By Sherry Listgarten | 1 comment | 3,055 views

The University of California’s flexible policies during COVID-19
By John Raftrey and Lori McCormick | 6 comments | 2,200 views

Repairing a Disagreement with your Beloved & “Physical” vs. “Social” Distancing
By Chandrama Anderson | 1 comment | 1,785 views