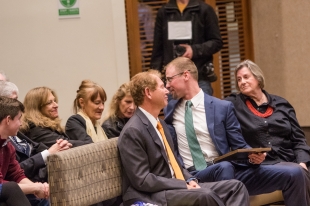 Former Councilman Cory Wolbach shakes hands with Catherine Crystal Foster and others in attendance at a council meeting on Jan. 7, 2019. Wolbach sits in between fellow former council members Greg Scharff and Karen Holman, who were all honored for their years of public service. Photo by Veronica Weber.

6Djockey is a registered user.


The evening was full of "congratulations, job well done", promises of collegiality and other platitudes. If I hadn't seen the council in action, I would have thought that all the members are just a nice bunch of folks that wouldn't pull any shenanigans. Oh that it would be so.

50 people like this
Posted by Disappointed
a resident of Another Palo Alto neighborhood
on Jan 9, 2019 at 11:26 am

Why is Karen Holman bashed so severely in this article? She was for much more for housing than what she was against, yet the emphasis is what she opposed, and the supposed irritation of her colleagues. She is done a disservice here. It's not even mentioned that she was Mayor.

She did oppose the VTA development and for good reasons which are not mentioned - that doesn't make her anti-affordable housing. She was in fact a long-time supporter of affordable housing and a champion of the Maybell senior project, being very public in her support of it even though she was up for re-election. It took real courage for her to do that. And so what that she supports the 50-foot height limit - it's the law. Wow - she follows the law, imagine that.

She has been a supporter of affordable housing decades longer than anyone else on City Council (I am not aware of a similar record for Kniss but I may be wrong). One would never know any of this from reading the article.

Holman deserved all the acclaim she got and more on Monday night for good reason - she well served the City and its residents as a Planning Commissioner, City Councilwoman and Mayor for 17 years. If some younger whippersnappers on the Council were occasionally impatient with her, I say - wait till you have as much knowledge and experience, wisdom as she, then maybe you won't be impatient. Till then, learn more, grow wise.


I am disappointed this article sounds like a tribute to Mr. Scharff rather than a factual reporting of the 1/7 City Council meeting.

The article neglects to report the warm public response given to Ms. Holman, included 2 standing ovations. Several from the public, including me, thanked Ms. Holman for her years of public service while mentioning some of her accomplishments benefiting Palo Alto residents.

The article also fails to report that NO ONE from the public rose and thanked Mr. Scharff for his service. Many in attendance left after Ms. Holman spoke, not bothering to stay and hear Ms. Kniss' personal tribute to Mr. Scharff or hear Mr. Scharff speak.

That to me, is newsworthy!


Report Objectionable Content
Email Town Square Moderator
11 people like this
Posted by Not a real mayor
a resident of Crescent Park
on Jan 9, 2019 at 12:09 pm

I am certainly glad that karen is off the council. And i am glad that the weekly did not gloss over her " anti- everything" stance and her constant attempts to delay consideration of issues. Rather than saying that she represented the " residential" portion of the city, it would be better described as the " we have ours...." faction.
Regarding her stance via a vis the president hotel, this is another example of her lack of respect for private property rights , which is a repeat of what happened with her historic ordinance push years ago.
And let us not forget her causing a delay in the bike bridge over 101 ( design contest, iconic bridge etc.).
IMHO, her 9 years demonstrated a total lack of accomplishments

Report Objectionable Content
Email Town Square Moderator
8 people like this
Posted by Not a real mayor
a resident of Crescent Park
on Jan 9, 2019 at 12:28 pm

Rita- of course one can look at it this way- the farewell to karen was organized by her fervent supporters- everyone shows up at the meeting, gives her standing ovation and then walks out as a final insult to greg.
The weekly article, surprisingly, summed up her career quite well. Something get Cult of personality dosen't like.

Report Objectionable Content
Email Town Square Moderator
7 people like this
Posted by Holdrum
a resident of Another Palo Alto neighborhood
on Jan 9, 2019 at 1:07 pm

I’m what you’d call a residentialist but not impressed by Karen Holman who sort of says the right things but it takes two to tango and what happened all these years with Holman on Council is what it is - division.

Fair article, time to move on.

Giving KH two standing ovations and walking out to insult Scharff is childish and embarrassing.

Report Objectionable Content
Email Town Square Moderator
41 people like this
Posted by mauricio
a resident of Embarcadero Oaks/Leland
on Jan 9, 2019 at 1:15 pm


Scharff and Wolbach represented the real state development industry and corporate interests. They worked for the benefit of every corporate interest and for those wishing to live in Palo Alto, but never for the local residents who made P.A. a once wonderful place to live. Karen Holman was against the destruction of Palo Alto, a huge difference.

Report Objectionable Content
Email Town Square Moderator
40 people like this
Posted by Anon
a resident of Another Palo Alto neighborhood
on Jan 9, 2019 at 1:35 pm

I'm a residentialist who is not opposed to more housing. I agreed with Holman on almost every issue-- especially, her support of -real- retail space (with transparent windows!), and her opposition to more office space. Palo Alto can add more housing while adding zero new office space, and do it without exceeding height limits. As long as new office space is allowed, Palo Alto will continue to fall further behind in the jobs/housing imbalance. High-rises are a red-herring, and, are not needed.

And, thank you Karen Holman!

Report Objectionable Content
Email Town Square Moderator
20 people like this
Posted by 8 pm
a resident of Evergreen Park
on Jan 9, 2019 at 3:34 pm

8 pm is a registered user.


Unfortunately, Liz Kniss, in her last moments presiding as mayor, spent such an inordinate amount of time talking during the first part of the meeting she delayed the proceedings well past the scheduled 8 pm ending time. If the meeting had been close to being over at 8 pm I believe many of us would have stayed. And admittedly most of us would probably have stayed late to watch Karen Holman recognized. However, this is somewhat ironic since Liz Kniss has been the council member who has most often complained about council meetings running late, and in the past walking out before the agenda was finished!

Report Objectionable Content
Email Town Square Moderator
6 people like this
Posted by Taxpayer
a resident of College Terrace
on Jan 10, 2019 at 2:53 pm

Report Objectionable Content
Email Town Square Moderator
9 people like this
Posted by Not ethical
a resident of Old Palo Alto
on Jan 11, 2019 at 10:57 am

Scharff's frequent trick has been to vote for a pro resident measure then introduce amendments to weaken or destroy it.
That is sneaky dishonest lawyering, not ethical representation.