The year in photos 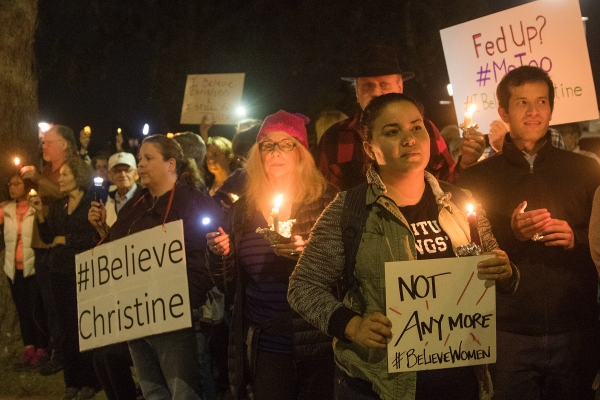 Sept. 23, 7:08 p.m.: Hundreds of residents gather at the intersection of El Camino Real and Embarcadero Road during a vigil supporting Palo Alto resident Christine Blasey Ford just days before she was scheduled to testify before the Senate Judiciary Committee about a high school incident in which Supreme Court nominee Brett Kavanaugh (now Supreme Court Justice) allegedly sexually assaulted her. Photo by Veronica Weber. 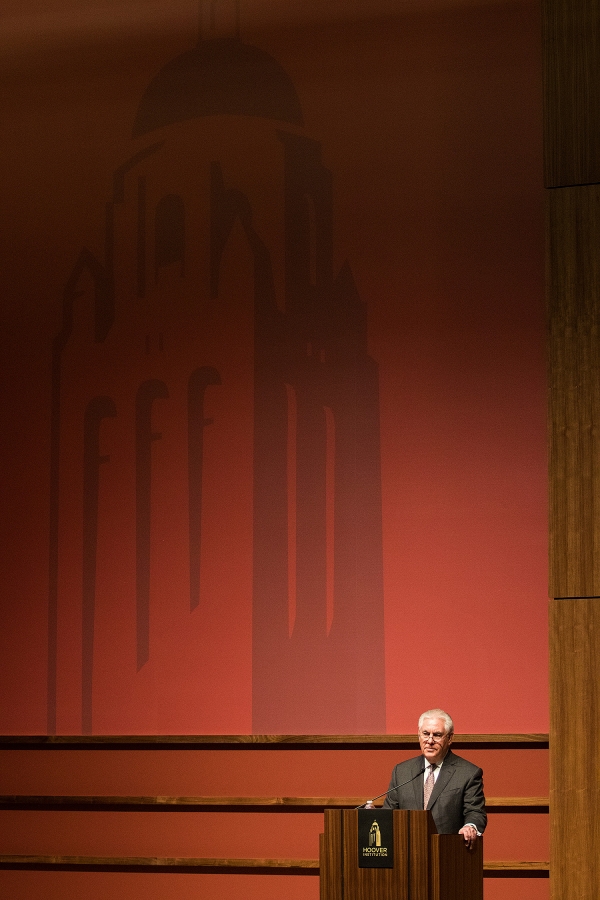 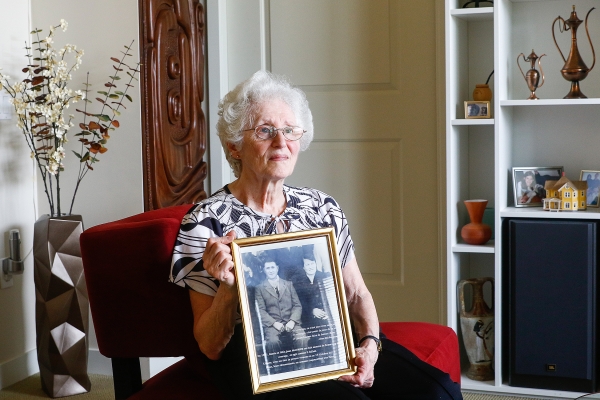 Jan. 24, 11:51 a.m.: A week before her 79th birthday, Liliane Kuhn shares her story of how Jean and Marie Maurier took her into their home in rural France for four years when she was a child to help her escape the Nazis during World War II. Photo by Veronica Weber. 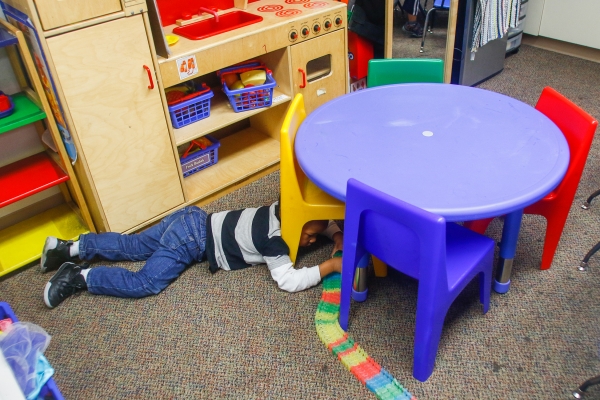 Jan. 24, 2:46 p.m.: Jordan Washington, 4, plays in a classroom in the Child Development Center during its final months before the Ravenswood School District shut it down due to budget cuts. Photo by Veronica Weber. 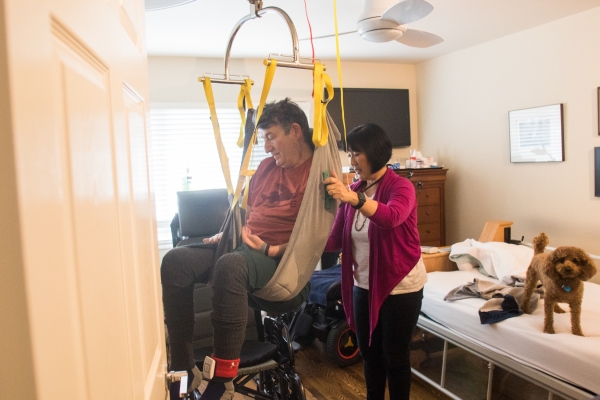 March 8, 3:20 p.m.: Karen Kang uses a mechanized lift to lower her husband, Jon Ferraiolo, into his wheelchair as the couple prepares to step outside for a walk with their dog, Pepe. After being diagnosed with ALS in 2014, Ferraiolo lost the ability to walk. Kang reflected on their relationship, which has lasted for more than 43 years: "I want people to know that you can live in the moment with someone that you love who has ALS and find great joy in that, that just because someone has a disability or is not the same person in terms of their capabilities, they really are the same person inside. And hopefully that's the same person that you fell in love with." Photo by Veronica Weber. 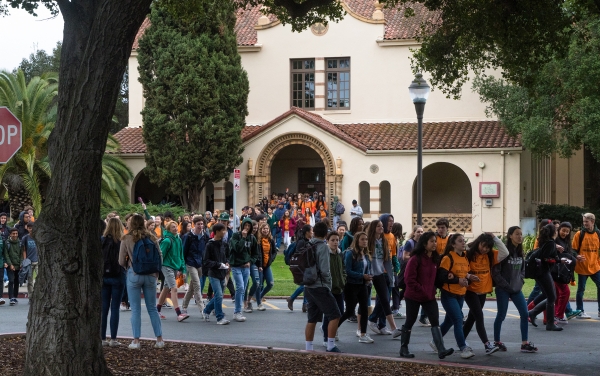 March 14, just after 10 a.m.: After the Feb. 14 mass shooting at Marjory Stoneman Douglas High School, in which 17 students and faculty were killed, hundreds of students from Palo Alto High School walk out of their classrooms and head to the corner of Embarcadero Road and El Camino Real to stand alongside students from Castilleja School during a nationwide protest denouncing gun violence. Photo by Veronica Weber. 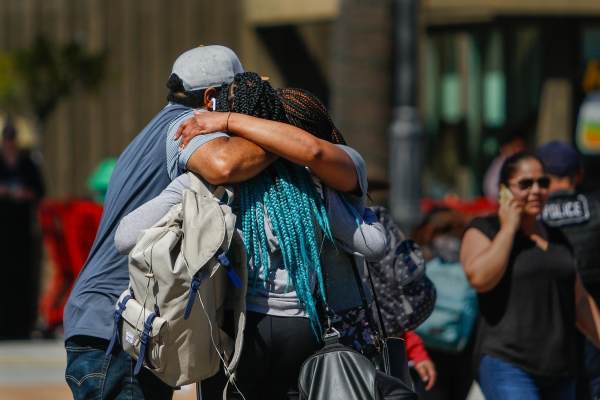 March 29, around 2:15 p.m.: Brian and Bridget Miller give their daughter Brianna a long hug after an anonymous caller threatened to "shoot up" Paly, prompting Palo Alto police to put the campus on lockdown. The call was later deemed a hoax. Photo by Veronica Weber. 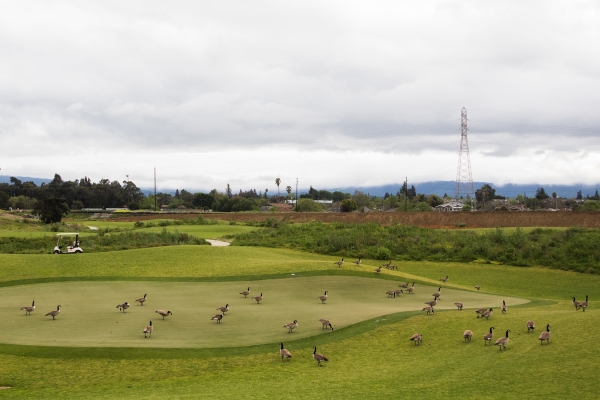 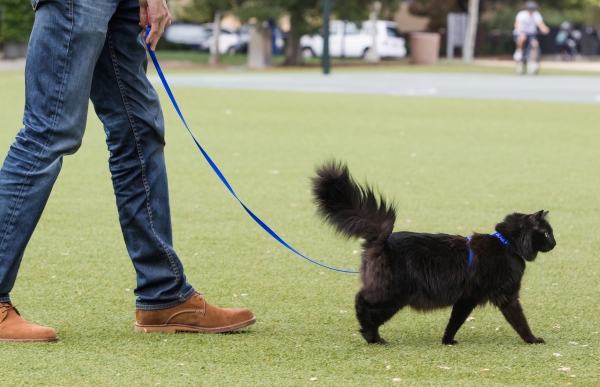 April 11, 2:30 p.m.: On National Pet Day, Stanford University student Christian Fong celebrates by taking his black cat Alphonse out for a stroll on the campus grounds. Photo by Veronica Weber. 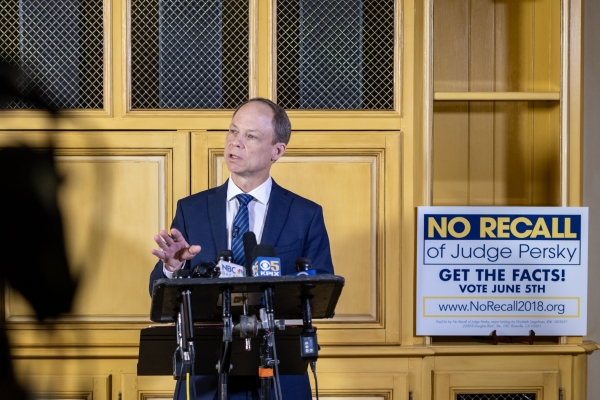 May 8, 10:37 a.m.: As the June primary election edges closer, Judge Aaron Persky hosts a press conference to speak out about the recall measure brought against him following his controversial 2016 sentencing of Brock Turner, the Stanford University athlete who sexually assaulted an unconscious woman on campus. "The recall will set a dangerous precedent for judges," Persky said. He was later recalled in the election. Photo by Adam Pardee. 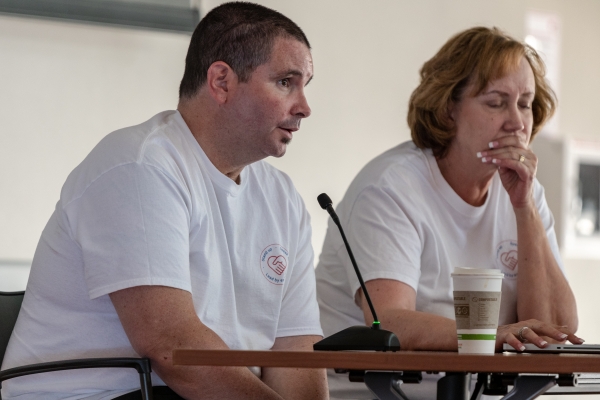 May 15, 1:21 p.m.: After receiving a standing ovation from the audience at Mitchell Park Community Center, San Francisco Giants fan Bryan Stow sits beside his mother, Ann Stow, to speak about the severe brain damage he endured after he was attacked and beaten unconscious at Dodger Stadium in 2011. Stow also spoke of efforts to stop bullying and encouraged others to be "upstanders." Photo by Adam Pardee. 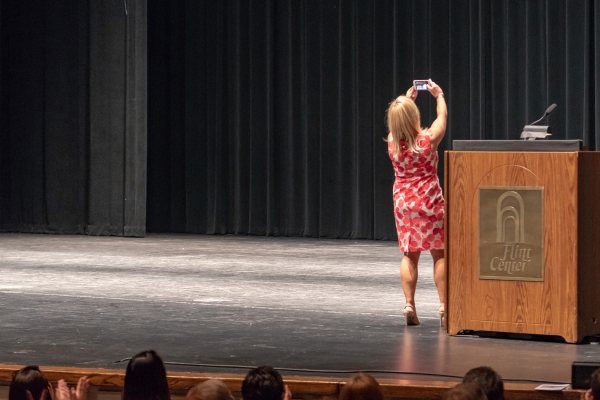 May 27, 12:42 p.m.: After announcing her resignation in March, Palo Alto High School Principal Kim Diorio takes a selfie with the Class of 2018 before addressing the crowd at De Anza College in Cupertino in what was her last baccalaureate ceremony as principal at Paly. Photo by Adam Pardee 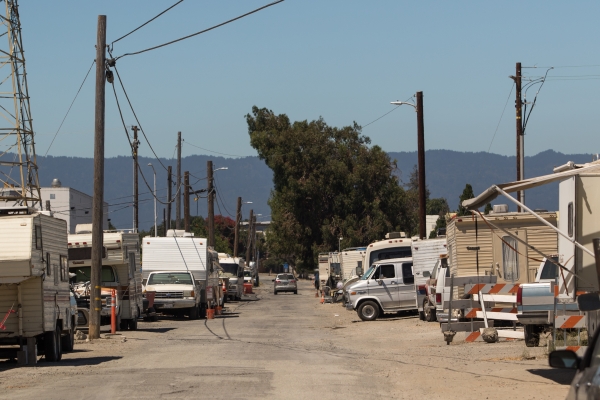 July 11, 10:28 a.m.: Numerous RV and car dwellers relocate to Bay Road after the city of East Palo Alto officials force them off Weeks Street due to public safety concerns. The city approved a pilot project to convert a public lot into a temporary parking area for homeless outreach, but many RV dwellers argued that the pilot program did not provide permanent shelter and opted to remain on Bay Road. Photo by Veronica Weber. 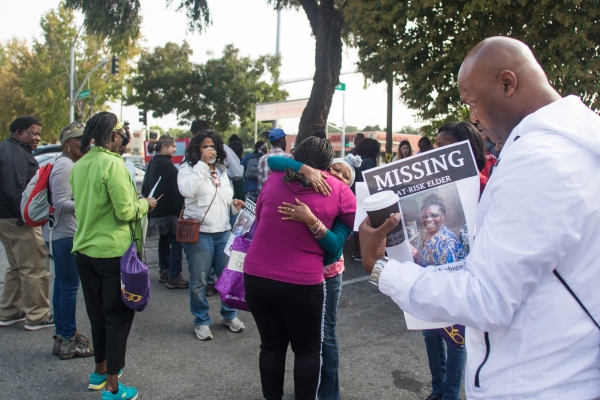 Aug. 25, 9:20 a.m.: Dozens of friends, family members and neighbors of Wamaitha Kaboga-Miller gather outside the East Palo Alto Senior Center to participate in a volunteer-led search party for the Palo Alto resident, who was reported missing after she was last seen in East Palo Alto on Aug. 17. In September, police discovered Kaboga-Miller's body in her car off Highway 84. According to police, she died in an auto accident that sent her car into the bushes and out of public view. Photo by Veronica Weber. 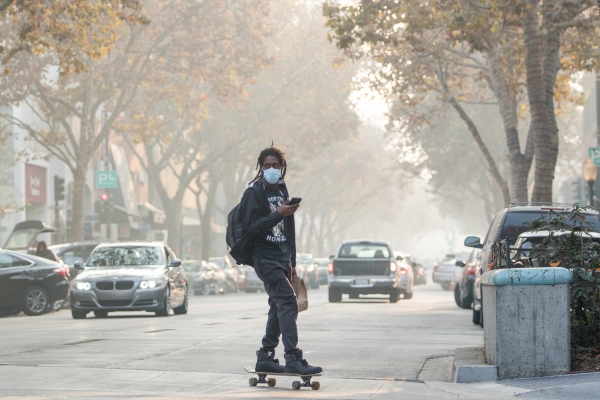 Nov. 15, 3:51 p.m.: Smoke and hazardous air settles over Palo Alto as the Camp Fire in Butte County more than 200 miles away burns out of control, forcing many people to wear masks when outside. The fire, which burned from Nov. 8 to Nov. 25, is considered the state's deadliest fire, killing 86 people and burning 153,000 acres and 19,000 structures. Photo by Veronica Weber.
Previous Next

Throughout the year, we consistently check our calendars to keep track of our kids' dance recitals and doctor's appointments, count down the days to the start of a much-needed vacation, mark the day we got engaged or started a new career, or remind ourselves to call Mom on her birthday. Calendars not only help us manage our schedules but serve as a way to look back and remember the moments that defined the year. As I looked back through my own calendar this year, I discovered many events and moments that defined Palo Alto in 2018. I've compiled photos from some of these key moments that unfolded over the past 12 months.

View all the photos alongside captions by visiting our Atavist page.

The year in photos


Throughout the year, we consistently check our calendars to keep track of our kids' dance recitals and doctor's appointments, count down the days to the start of a much-needed vacation, mark the day we got engaged or started a new career, or remind ourselves to call Mom on her birthday. Calendars not only help us manage our schedules but serve as a way to look back and remember the moments that defined the year. As I looked back through my own calendar this year, I discovered many events and moments that defined Palo Alto in 2018. I've compiled photos from some of these key moments that unfolded over the past 12 months.

View all the photos alongside captions by visiting our Atavist page.

An Exxon CEO and Putin award winner as Secretary of State, then fired.

Protests regarding yet another mass shooting, this the at Marjory Stoneman Douglas high school.

The takeover of Palo Alto as an office park continues almost unabated.

Residentialists preferred by voters but won't create a majority against those who lied about their inclinations to take office in the last election. Voters saw through it for open space seat.

We witnessed the dangers of overbuilding for the infrastructure in videos of CA fires. Story about lack of preparedness.

Schools renamed, got solar panels. Neighborhood nearby Fletcher coincidentally getting parked up and may need to join in surrounding parking restrictions.

School board elections still didn't get us an ombusposition. 2e movie and still way too many special needs unaddressed.

The party supposedly wanting to reduce the impact of government in ordinary lives has spent the year reaching down into lives and shaking people all around, and constantly demanding attention. Many Palo Alto families quietly in financial crisis over tax increases for people in the middle living in high-cost parts of the nation.

No mention of the roundabouts!

Thank you! I really enjoyed that.