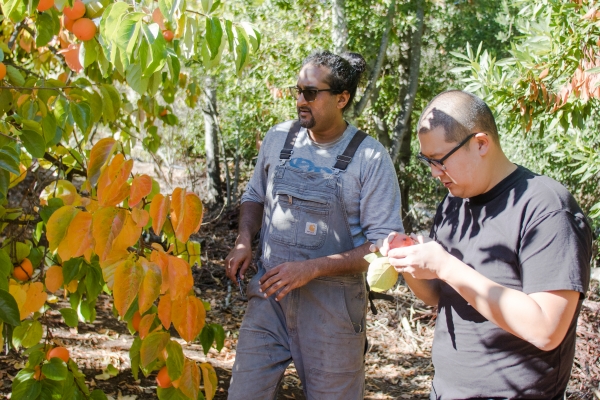 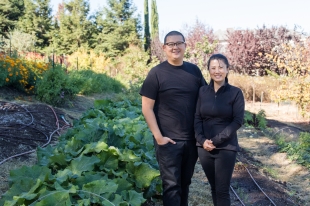 The chefs were three months from their restaurant opening, and they had a big problem.

Husband-and-wife team Michael and Meichih Kim were expanding what had been a private restaurant for months into an ambitious, tasting-menu only Korean restaurant in the heart of downtown Palo Alto.

The problem? Despite the abundance of fresh produce in the Bay Area, quality Korean produce is incredibly hard to come by. "Almost nationwide you either grow it yourself or know people that grow it," Michael said. They had been pleading with local farmers to custom grow for the 16-seat restaurant, with little luck.

"At that point, three months before the restaurant opened, it didn't look very good for us to get good quality product," Michael said.

One of the farmers the couple had approached was Tarun Marya, a former chef who had recently left the Bay Area to work on a farm in Maui. When that fell through, he returned and reconnected with the two chefs, agreeing to work for them on the land he had access to: the large backyards of his mother and her neighbor's homes in Los Altos Hills.

A partnership was born, and Maum opened on University Avenue in July with the backyard gardens serving as the restaurant's private farm. The farm and the relationship it engenders enables the kitchen to operate at full creative capacity and to deliver on a menu that is at once modern and nostalgic, marrying the flavors of Korean and Northern California culinary traditions.

Steps away down a cul-de-sac and through a hole in a wire fence into a neighbor's backyard is another half-acre of land lined with long rows of colorful peppers, cherry tomatoes, basil, lemon cucumbers, flowers and other produce.

"The products that we grow here are the basis for food at the restaurant," Michael said.

The shin dong ha becomes kimchi, diced and sautéed for kkakdugi brisket rice, served at Maum's long communal table in a massive, shallow bowl reminiscent of paella. Head lettuces serve as vessels for galbi (grilled ribs), kimchi, ssamjang dipping sauce and perilla in the restaurant's ssam course. With the persimmons, "we're doing what every chef does in the fall," Michael said: peeling and drying them. Called gotgam in Korean, they serve the dried Hachiya in a post-dessert course.

Ingredients that don't make it onto the menu are used for Maum's family meal, feeding the restaurant staff.

It's the farm-to-table relationship of most chefs' dreams. Michael visits the farm every two to three weeks and Meichih, about once a month, both to check in and for inspiration. On a recent drive to the farm, they pondered how to use impossibly sweet Penelope peas, shelling peas that Marya taught them can be harvested in the fall rather than spring. They bring their whole staff for farm days and are constantly in communication with Marya, who drops off produce at the restaurant three times a week.

They talk frequently about "what's next or how we can progress at the farm," Michael said. "That's how we progress at the restaurant, too. Whenever I'm in a bind for inspiration I just come down here (and) walk around."

Marya, who goes by Runi, was born in Mountain View but spent the majority of the first 18 years of his life in the south of France. He started college in a pre-med program but dropped out and started learning about permaculture and organic farming while working at restaurants.

He went on to pursue a degree in environmental studies at the University of San Francisco, started a business building edible backyards, and worked on organic farms and as a pastry chef. He also grew vegetable and grain seeds for food production, selling the seeds in recent years at a stand at the Mountain View and Los Altos farmers markets, where he first met the Kims.

Growing Korean crops, though, was mostly a new frontier for Marya. He said he's drawn on techniques he learned over time -- including about Korean natural farming, which focuses on "building a healthy soil biology by using what can be found on the farm or local flora" -- and is learning alongside the co-chefs "about new crops and how to integrate them into our food system here."

They're all excited about 2019, when they'll be able to plan farther ahead for specific varieties and ramp the farm up to full production.

The farm allows Maum, which Michael said means "heart and soul," to be the fullest expression of itself. Michael is a Korean-American Los Angeles transplant who graduated from the Culinary Institute of America at Greystone in St. Helena and cooked at Craft in Los Angeles, SPQR in San Francisco and was the opening chef for Namu Gaji, a Korean restaurant in San Francisco. Meichih, who was born in Japan but grew up in Orange County, also comes with fine-dining experience, including at the three-Michelin-star Per Se in New York City and the three-starred Benu and the now-closed RN74 in San Francisco.

Their goal at Maum is to elevate Korean cuisine while honoring the fundamentals. Neither would be possible without the humble ingredients Marya is nurturing just a few miles away.

It is nice to see farmer Runi bringing this area back to what it used to be in terms of growing local organic produce!

I cannot wait to try Maum and see what chef Michael Kim and his team have created based on their passions and efforts to bring the best flavors to the table!

A Pragmatic Approach to A Trillion Trees
By Sherry Listgarten | 1 comment | 2,982 views

The University of California’s flexible policies during COVID-19
By John Raftrey and Lori McCormick | 6 comments | 2,147 views

Repairing a Disagreement with your Beloved & “Physical” vs. “Social” Distancing
By Chandrama Anderson | 0 comments | 1,699 views