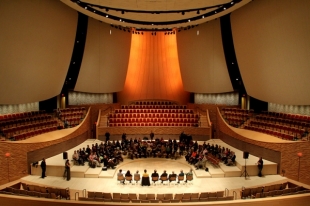 A small crowd previews the Bing Concert Hall before its opening in 2012. Weekly file photo.

Becky Sanders is a registered user.


Every time I read something like this I donate to a related cause. Like today I'm inspired to donate to one of the worthy Jewish charities serving our area. Jewish Family Services or one of our synagogues. I can't do anything about these cruel acts but I can vote with my pocketbook. Even a small amount eases my spirit. For me, donating when you feel the hurt of others helps.

Maybe we can't donate every time something moves us, or can we? Rich folks can. And the rest of us can too. What if every time you read a painful story you popped a few dollars in a jar with a wish for goodness to spread over the land, and then when the jar is full, donate that to your favorite doing good out there charity.

Volunteering of course is another awesome way to spread more love out there.

I truly grieve that my Jewish friends have to deal day in and day out with threats to their security -- emotional and physical. None of us is safe these days really, but singling out race, creed or culture to hate is, as we all know, the first step toward worse things and therefore can't be tolerated here.


If Stanford started a "Hitler Studies" like in the book "White Noise" that would be a problem. When some kook wanders into an empty building and scratches a symbol that is pretty trivial and probably not worthy of the coverage.

I'm more concerned when the public sector becomes "bundled" with the interests of big business which to me is closer to what happens here when we let the high tech sector have the keys to the building so to speak at 250 Hamilton. "bundled" like the latin and italian word for "fashion" or "faggot" or, wait for it..."fascist". Or when the elites and the working poor are so far apart that we start to look at them like, in the Orson Wells film about Austria, ants.

Report Objectionable Content
Email Town Square Moderator
5 people like this
Posted by Abitarian
a resident of Downtown North
on Nov 29, 2018 at 1:52 pm

"When some kook wanders into an empty building and scratches a symbol that is pretty trivial and probably not worthy of the coverage."

Your lack of empathy is appalling. Do you think an Auschwitz survivor seeing a swastika considers it trivial?

The 2018 figures are not available, but of course they will include the recent massacre of 11 people attending Shabbat services at a synagogue in Pittsburgh.

The Nazi swastika is among the most hateful and feared symbols in human history. Even today, there are Jewish people all over the world who fear for their lives and are terrified by the rising numbers and activities of white supremacists.

We should abhor the practice and symbols of racism, bigotry, and xenophobia wherever we see them.

Report Objectionable Content
Email Town Square Moderator
12 people like this
Posted by Try & Look the Other Way If Possible
a resident of Atherton
on Nov 29, 2018 at 2:30 pm

> "When some kook wanders into an empty building and scratches a symbol that is pretty trivial and probably not worthy of the coverage."

Certain symbols are naturally going to have a far more negative and emotional impact on some more than others. For example, a 'rising sun' flag is probably more reviled by a survivor of the 1937 invasion of China than to say, a citizen of Botswana. The same can be said of Confederate flags and other symbols of past oppression.

To be offended is one thing...to expect everyone else to be equally offended is pushing things a bit. Not condoning any of this despicable vandalism...just saying that the outrage will vary upon how close it strikes to home.

Bottom line...consider the source. It was probably done by some pathetic loser trying to get attention. Though it is hateful and hurtful, why empower the person by making a bigger deal of it? Ignore the ignorant.

Posted by Try & Look the Other Way If Possible, a resident of Atherton

>> Bottom line...consider the source. It was probably done by some pathetic loser trying to get attention. Though it is hateful and hurtful, why empower the person by making a bigger deal of it? Ignore the ignorant.

Agree. If it is just bottom-up garbage from pathetic losers, the press and the public should just bury it, like they do certain other "news". OTOH, if it is top-down, driven by people in power or well-known political groups, then, -push back-. For example, donate, as the first poster suggested.

Report Objectionable Content
Email Town Square Moderator
5 people like this
Posted by Jane Gill
a resident of Menlo Park
on Nov 29, 2018 at 3:06 pm

It is funny that these types of graffiti often appear right after a holiday or other time when bored young people are out and about causing mischief and quite likely looking for attention.

As sad as it definitely is that someone might want to do this for whatever reason, it is nothing akin to shooting a synagogue or other horrendous type of event.

As others have pointed out, the culprit is probably pleased his (or her) handiwork is getting the type of attention it has.

Further to the previous commenter, in Ireland the swastika is an old Celtic fertility symbol and as late as the 70s there was a dry cleaning/laundry chain known as Swastika Laundries. The symbol itself has had mathematical connections also before it was known for its Nazism and the TV drama Foyle's War showed it as a pastime puzzle.

Of course authorities should be looking for the culprit who should be reprimanded as necessary, but reading too much into this just might be a waste of outrage.

Report Objectionable Content
Email Town Square Moderator
10 people like this
Posted by defend the homeland
a resident of Downtown North
on Nov 29, 2018 at 3:29 pm


@ Abitarian
The Holocaust survivors I've met are hardier than that.


@Becky Sanders: a giving jar is a GREAT idea. I am going to start one tonight and fill it every time I read something rotten like this story. You made my day! Thank you.