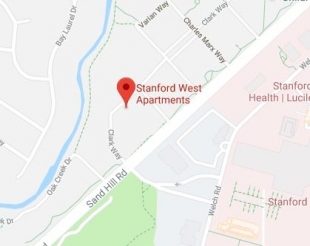 Jesus Silva Romero, 36, of San Jose, died of blunt force trauma when his climbing rope was fed into a chipper while cutting trees for Arborwell at Stanford West Apartments on May 19, 2018. Image courtesy Google Maps.

$18,000 for someone’s life. So many things went wrong against code and natural knowledge one would hope others would have working among such machines as wood choppers.

So they helped pay for his burial costs “defrayed coats” but ultimately I don’t think helped this family enough. They’ve got lots of insurance. I feel very badly for the life cut short and family left behind.

As far as I know, the fine is separate from the wrongful death lawsuit that I imagine is ongoing?

The employee who moved the chipper and began feeding it with branches should be fired and also fined for his negligence in this accident.

An $18K OSHA fine + whatever the family receives in a lawsuit should teach this company and its employees a good lesson.