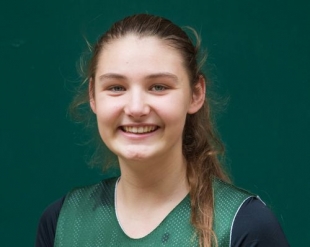 Now Pinewood has a new identity -- as a great girls basketball team. Period. Any level. No qualifiers necessary.

If there were any nay sayers their doubts were dispelled last March 17 when Pinewood defeated Mitty in an epic triple-overtime battle for the Northern California Open Division championship. That was a Mitty team which went into the game 29-0, ranked No. 1 in the nation. It was the second time in three years the Panthers had shocked the basketball world by knocking off a supposedly invincible team acknowledged as the nation’s best. In 2016 they did it on the road in the NorCal semifinals against St. Mary’s of Stockton.

Now the giant-killers have become giants in the world of high school girls basketball.

In that win over St. Mary’s, key roles were played by two freshmen: Hannah Jump and Klara Astrom. Now Jump and Astrom are seniors, about to embark on the final season of high school careers that helped elevate Pinewood to the highest level of girls basketball.

“We’re excited to tee it up,’’ Scheppler said. “I think our defense will be great. We’re moving with great connection and synergy. Everyone is operating under the same principles, the same code. We’ve had a great first two weeks of practice. Everyone has gotten six months better since our last game. I’m excited for a great year.’’

Jump has committed to play her college ball nearby at Stanford. Astrom, whose value to Pinewood’s success can hardly be overstated, has signed with Yale. At an undersized 5-foot-9 Astrom has regularly guarded and usually outplayed the opposing team’s biggest player, all the while crashing the boards and knocking down 3-pointers.

Speaking of knocking down 3-pointers … after making 64 of those shots as a freshman, Jump connected on 100 as a sophomore and 102 last season as a junior. And according to Scheppler, her shot is better than ever.

“Some of her numbers in drills are like Klay Thompson, 47 of 53, 31 of 37, just amazing,’’ Scheppler said. “We have a drill we call 99 where you shoot for three minutes, get three points for every shot you make and have three points taken off any time you miss two in a row. The most 3s you can take in a minute is about 19. Hannah made 47 in three minutes.’’

“Both have different strengths,’’ Scheppler said. “Una is more of an attacker. Annika knows our sets, is better defensively pressuring the ball. Bri handled defensive pressure and gave us an advantage. We’re waiting to see if these two can do that. I think they’ll be at Bri’s level when they get older. Where they’re at now is very good.’’

These local restaurants are donating meals to Bay Area residents in need. Here's how to help.
By Elena Kadvany | 6 comments | 10,848 views

Coronavirus: Plan ahead now for a big outbreak
By Diana Diamond | 18 comments | 3,925 views