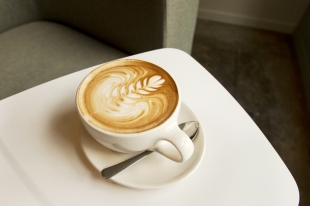 A latte from Blue Bottle Coffee, which is opening new location at Stanford Shopping Center. Photo by Magali Gauthier.

Is a "third-wave" coffee roaster one that has emerged after the chain-store group of Starbucks, Peets and even Phil's? There seems to be some "boutique"-type coffee retailers with more "local" identities ... There is a new one in Menlo Park that seems to be doing very well.

Portland's Thai food darling Pok Pok will be popping up on the Peninsula this spring
By Elena Kadvany | 2 comments | 3,498 views

Flying: How to lower your impact
By Sherry Listgarten | 18 comments | 2,909 views

Overachieving in High School: Is It Worth It?
By Jessica Zang | 7 comments | 1,512 views