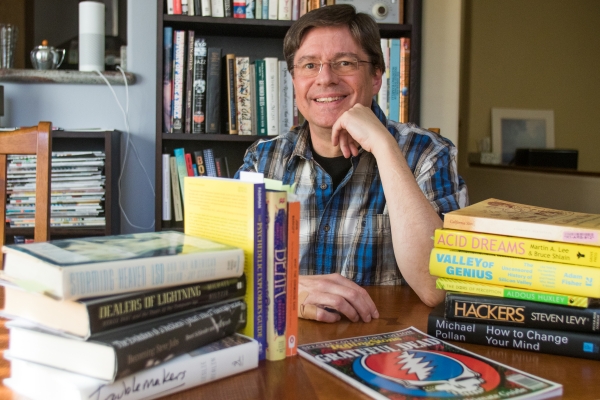 Rich Green, president of the Palo Alto Historical Association, sits at home surrounded with books related to the history of LSD and Silicon Valley. Green will speaking on Sunday, Nov. 4, about how the LSD experimental trials from the 1950s launched the discoveries and innovations in Silicon Valley and beyond. Photo by Veronica Weber.

When Palo Alto Historical Association Vice President Rich Green told the nonprofit's board members that he wanted to do a lecture on the powerful hallucinogen lysergic acid diethylamide, or LSD, they were initially aghast, he said. But then they learned about its long history as a catalyst for Silicon Valley creativity.

Green will discuss the historical aspects of the hallucinogen and its key players -- many of whom were prominent local engineers -- during his talk on Sunday, Nov. 4, titled, "LSD in Palo Alto: The world would never be the same."

Green first became interested in LSD's impact on innovative technologies, he said, after a chance meeting at a New Year's Eve party with Dr. James Fadiman, a psychologist known for his research of psychedelics. Since then he has gathered dozens of books and artifacts related to Silicon Valley's early hallucinogenic influences.

Palo Alto and Menlo Park became hotbeds in the 1950s and 1960s for research into use of LSD in business, which then grew into a movement with a goal of harnessing the collective human intellect. The thinking was that computers and artificial intelligence could be the engines running that large pool of thinking, Green said. The International Foundation for Advanced Study and Stanford Research Institute (SRI) in Menlo Park and the Stanford University Artificial Intelligence Laboratory in Palo Alto became the centers for this research, he said.

Stolaroff himself was looking for spiritual enlightenment, Green said, but he became known for studying psychedelic psychotherapy.

Fadiman, who graduated from Stanford University with a doctorate in psychology, worked on a psychedelics study at the International Foundation in the early 1960s and also at Stanford Research Institute's Augmentation Research Center. The center was founded by Silicon Valley pioneer Doug Engelbart, who is most associated with inventions including the computer mouse, graphical user interface and key aspects of the internet.

In the 1950s, Engelbart had a hypothesis that harnessing the collective human intellect would help solve complex, urgent problems, according to his paper, "Augmenting Society's Collective IQ."

Willis Harman, another electrical engineer who taught physics and electrical engineering at Stanford University in the 1950s, was a pioneer in the human potential movement. He taught a Stanford graduate seminar called "The Human Potential," which included topics on mediation, psychoactive drugs and parapsychology. He became a social scientist at SRI, where the Alternative Futures Project was to introduce business and thought leaders to LSD.

These scientific approaches to LSD intersected with a broader cultural and spiritual movement. Fadiman, for example, was introduced to LSD by Richard Alpert, known as Ram Dass, a former Harvard University graduate adviser. Fadiman became the LSD "guide" to Stewart Brand, the Whole Earth Catalog editor, during his first LSD trip in 1962 at Stolaroff's lab. And Fadiman became friends with noted psychedelic guru and author Ken Kesey when they lived on Perry Lane at Stanford, Green said.

Kesey, a Stanford student, took part in psychedelic drug research at the Palo Alto Veterans Administration Hospital in Menlo Park. His book "One Flew Over the Cuckoo's Nest" came out of the VA hospital experience.

Kesey and Brand, as part of the Merry Pranksters, held Acid Tests events in the Bay Area, where they advocated LSD use to thousands of young people. At the 1966 Trips Festival, 6,000 people came to dance to live music and drink LSD-laced punch.

Younger engineers who had LSD experiences, notably Apple co-founder Steve Jobs, began to see greater creative possibilities after LSD altered their sense of reality, including of spatial relationships and time.

Without LSD, Green thinks that the PC might not have been invented.

"It could only happen in Palo Alto," he added.

Silicon Valley innovation is still being influenced by LSD, Green said. Fadiman, now 79, is a proponent of micro-dosing, which gives the user a sharper focus and helps make creative connections between thoughts in a subliminal way, without the 16-hour heavy "trip," Green noted.

"It's rampant in Silicon Valley now. There may be tens of thousands of people micro-dosing LSD right now," he said. Teams of inventors are taking the micro-doses and convening to work on projects, he added.

But he is quick to state that neither the Palo Alto Historical Association nor the Palo Alto History Museum (of which he is president) condones the use of illegal drugs. LSD is a Schedule 1 drug, according to the U.S. Drug Enforcement Administration, and has no currently accepted medical use and a high potential for abuse.

But LSD's connection to Silicon Valley, beyond the stereotypical countercultural references, is fascinating, he said.

Interesting to read the research on its influence within Palo Alto. As long as the discussion remains objective and factual (rather than partisan), I hope that we would see how S. Valley became the powerhouse that it is as opposed to judging the past.

>>> Kesey and Brand, as part of the Merry Pranksters, held Acid Tests events in the Bay Area, where they advocated LSD use to thousands of young people. At the 1966 Trips Festival, 6,000 people came to dance to live music and drink LSD-laced punch.

With that in mind, you can't overlook the Grateful Dead who provided the music (environmental soundtrack) for these gatherings.

It will be interesting to see if any local Deadheads from 'way back when' attend this upcoming lecture...dinosaurs in tie-dyes.

> ...micro-dosing, which gives the user a sharper focus and helps make creative connections between thoughts in a subliminal way..."It's rampant in Silicon Valley now. There may be tens of thousands of people micro-dosing LSD right now,"

Not surprising considering the number of people now 'toking up' before heading off to work or school. Marijuana today, LSD tomorrow...all in smaller doses that allow one to 'stay high but keep their priorities straight'.

The rainbow is coming to a town near you.

> ...a catalyst for Silicon Valley creativity...many of whom were prominent local engineers...

Then along the same lines, the contribution of alcohol must not be overlooked either. Walker's Wagon Wheel in Mountain View was a well-known meeting place for design engineers in the semiconductor field. During the late 1970s and throughout the 1980s, their innovative embedded and programmable 'chip' creations were critical to the development of PC and Mac computer operating systems.

Instead of tripping, many just got inebriated and brainstormed while imbibing countless cocktails during their lunch periods, after work hours and evening forays at the bar. Different strokes for different folks.

We can safely assume as well as say, that both booze and acid played key roles in the technological development of modern personal computer systems.

Marijuana had its contributions as well...primarily amongst the software designers.

Imagine how hindered we'd be today if everyone had stayed 'straight'.


Report Objectionable Content
Email Town Square Moderator
2 people like this
Posted by Automation isn't so good
a resident of Crescent Park
on Nov 3, 2018 at 8:56 pm

>Imagine how hindered we'd be today if everyone had stayed 'straight'.

Yes, we might have telephones with good clear sound, and that don't disconnect. Maybe even communications with people who can spell.
And less addiction. And no selfies!
We would certainly have fewer life-wasting games, and of course, less election tampering. And maybe, a president who was sane.
And fewer homeless people forced out of their jobs by robots.
Doesn't sound so bad to me.

Report Objectionable Content
Email Town Square Moderator
10 people like this
Posted by Don't Forget the Liquor
a resident of another community
on Nov 3, 2018 at 9:33 pm

> And maybe, a president who was sane.

What is the correlation here?

The POTUS/45 stated that he has never had a drink of alcohol in his life due to the tragedy of his older brother's alcoholism.

Reality is for people who can't face drugs.

A Pragmatic Approach to A Trillion Trees
By Sherry Listgarten | 1 comment | 2,489 views

The University of California’s flexible policies during COVID-19
By John Raftrey and Lori McCormick | 6 comments | 1,908 views

Repairing a Disagreement with your Beloved & “Physical” vs. “Social” Distancing
By Chandrama Anderson | 0 comments | 1,268 views