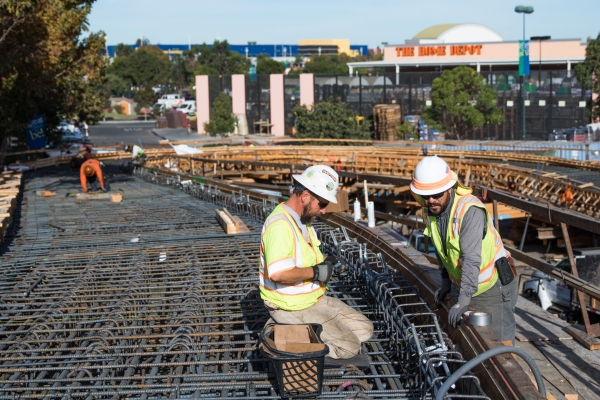 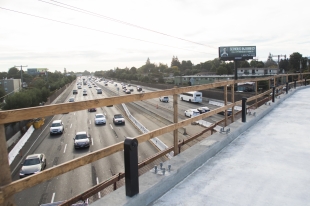 Cars drive on U.S. Highway 101 as seen from a new pedestrian overpass currently being constructed in East Palo Alto. The bridge will feature a walkway with LED lighting visible from the left side of the structure. Photo by Veronica Weber.

The two sides of East Palo Alto separated by bustling U.S. Highway 101 will soon link again for the first time in more than 60 years.

"When you are up here, you get a real feel for what a physical barrier the freeway is," Charpentier said.

But the $13 million bicycle and pedestrian bridge, which could open as soon as this March, will give residents of East Palo Alto's west side, which has virtually no amenities, access to its shopping center, schools, churches, city government, parks and open spaces. Residents on the east side, many of whom work in Palo Alto, will soon be able to bike to work and have access to libraries, parks and other local and regional attractions, he said.

The overpass is also a regional asset, Charpentier noted. Shoppers, bicylists traveling to jobs at Facebook and Google, recreational hikers and bicyclists seeking to use the Bay Trail will now have a safe route and a continuous link from the east side of the Dumbarton Bridge to downtown Palo Alto, Stanford University or Embarcadero Road. "It will be the most direct and safest route to the Caltrain station," he noted.

Looking to the future, the overpass will also provide a safe and important link for bike commuters traveling to Bay Road and the future business district.

Abrica, who was one of the founders of the city's incorporation in 1983, said the idea of a bike and pedestrian overpass was one of the early social justice issues identified by city leaders. It remained dormant for many years while the city grappled with other issues and worked to build up a tax base, but the council has been focused on making the overpass a reality for the past decade, he said.

"Our population needs to be connected on a day-to-day basis. Palo Alto doesn't have a lot of population living on the east side, but for us it is a bread-and-butter issue. And we're adding a very needed piece to these regional connections," he said.

East Palo Altans already walk and bike more than the county average. Four percent of residents journey to work by bike and 4 percent walk. Countywide, 1 percent use a bicycle and 3 percent walk, according to the existing conditions report.

Abrica and Charpentier said the overpass would encourage more people — and especially students — to bike or walk to school to avoid the heavy traffic congestion going through the city. The overpass could in turn help reduce traffic congestion because fewer parents would need to drive their children from the west side to the east side of the city, which houses the city's schools.

Plus, overpass users will also have a commanding and attractive view of the mountains and baylands as they travel, a stark contrast to sitting in traffic, city officials noted.

Public Works Director Kamal Fallaha said that at 12 feet, the overpass has one of the widest surfaces to accommodate users. The 1,100-foot-long overpass uses 1,500 cubic yards of concrete and 700,000 pounds of steel. It includes a long, sweeping ramp for access from a point along West Bayshore and Newell roads on the west side and another at Clarke Avenue on city-owned property on the east side, adjacent to the Ravenswood 101 Shopping Center. The quarter-mile-long bridge is compliant with the federal Americans with Disabilities Act, he said. The overpass has a gentle sloping grade to make travel smoother and expandable joints to withstand earthquakes.

The project was in the planning stage for about three years and included multiple community meetings for residents' input. Its construction phase was funded by an $8.6 million from the state Active Transportation Program, $2.5 million from Facebook traffic mitigation fees, and $677,473 in funds collected through the city's measures A and M.

Another planned bike and pedestrian overpass at University Avenue is currently in the works but does not have funding, Fallaha said. It would cost an estimated $14 million for construction and about $1 million to design.

The existing University Avenue overpass at Highway 101 is the last old interchange in San Mateo County that has not been upgraded. The California Department of Transportation is currently working on the Willow Road interchange to the north that costs $80 million, he said.

Measure A funds will be used to fund the University Avenue interchange, but a project can take up to 20 years until completion, he said. The sidewalk on the existing bridge is only 4 feet wide and must accommodate bikes and pedestrians. Users must cross a ramp where cars enter University Avenue from the freeway.

Instead of waiting for a new interchange, the city wants to construct an adjacent bike and pedestrian overpass that would not be attached to the old bridge. The overpass would start on East Bayshore Road near University Avenue, across from the Chevron gas station, and would end near University Circle, Fallaha said.

Public Works officials plan to hold a community meeting in about two months to discuss the project, Fallaha said.

Good for East Palo Alto! I'm glad this important pedestrian route is going to be a lot safer for them.

Why can't Palo Alto get our act together and build a year-round pedestrian route across Hwy 101 in the southern part of town. Lots of people live in southern Palo Alto and work on the other side of the highway. It's a short safe walk or bike ride during the summer, but the bike path under the highway is closed during the winter and alternative routes are far out of the way and/or much more dangerous, especially during the dark evening commute.

The Bridge was needed way back when they took out the
"Underground" passage out!
Leaving the Then Citizens to Fight the Cars over the University Ramp.

Report Objectionable Content
Email Town Square Moderator
2 people like this
Posted by NO DRUGS
a resident of East Palo Alto
on Nov 5, 2018 at 10:28 am

@We Are The People

Wait, There was an underground passage? Where exactly, I'm genuinely curious?

Report Objectionable Content
Email Town Square Moderator
5 people like this
Posted by Great, but...
a resident of Menlo Park
on Nov 5, 2018 at 11:21 am

It's great to see a useful project like this go up. Congratulations EPA on making it happen.

But, please don't waste money on a bike crossing at University. Put the same effort into getting the long term project done. The new bike bridge is way too close to University to make the University one a top priority.

Also, how are bike routes being set up on either side of the bridge? Reference is made to biking to/from Facebook. But what is the path for safe riding from the corner of the shopping mall over there? Routing bikes along the Bayshore with overloaded, over signalled traffic isn't great. But a bike route (lane/bike friendly layout like Bryant in PA, etc.) down Clarke to Bay continuing on University would be great.

Report Objectionable Content
Email Town Square Moderator
1 person likes this
Posted by StarSpring
a resident of Adobe-Meadow
on Nov 5, 2018 at 11:29 am

StarSpring is a registered user.


@NO DRUGS, The under freeway passage is just North of San Antonio. It is closed during the winter months because it is at creek level.

Report Objectionable Content
Email Town Square Moderator
5 people like this
Posted by Resident
a resident of Another Palo Alto neighborhood
on Nov 5, 2018 at 2:06 pm

And yet south Palo Alto still waits for a bridge. Sigh.

Aletheia is a registered user.


Anybody buying that story?

Report Objectionable Content
Email Town Square Moderator
1 person likes this
Posted by Dave Burckhard
a resident of another community
on Nov 13, 2018 at 2:19 pm

I think that once the Friendship bridge over the San Francisquito creek and connecting trails reopen (hopefully in December), that E. Bayshore Road won't be necessary for many cyclists traveling between Facebook, East Palo Alto, and Palo Alto. Don't forget there is already a bike bridge over 101 at Oregon Expressway.

Great to see the pedestrian bridge almost done. When will highway 101 be restriped to add back the lane that was taken during construction? Will go a long way to easing congestion...

Report Objectionable Content
Email Town Square Moderator
9 people like this
Posted by Wary Of This Bridge...
a resident of Crescent Park
on Jan 9, 2019 at 12:51 pm

Report Objectionable Content
Email Town Square Moderator
1 person likes this
Posted by CrescentParkAnon.
a resident of Crescent Park
on Jan 10, 2019 at 12:12 am

> When will highway 101 be restriped to add back the lane that was taken during construction?

Speaking of 101 lanes .... has anyone noticed the weird errors in striping on 101 from Palo Alto all the way to San Jose.

There are stipes that are folded, or curve off to the left or fight. Some of them are too short, some too long. What happened, and why has it not been fixed? Some of the lanes look like someone was really high when they were painting the lanes.

Report Objectionable Content
Email Town Square Moderator
1 person likes this
Posted by CrescentParkAnon.
a resident of Crescent Park
on Jan 10, 2019 at 12:15 am

Report Objectionable Content
Email Town Square Moderator
2 people like this
Posted by A Simple Solution...Not
a resident of Barron Park
on Jan 10, 2019 at 9:40 am

Singapore's oldest cafe was about to open in Palo Alto. Then, the coronavirus hit.
By Elena Kadvany | 2 comments | 7,205 views

A Pragmatic Approach to A Trillion Trees
By Sherry Listgarten | 4 comments | 4,349 views

Repairing a Disagreement with your Beloved & “Physical” vs. “Social” Distancing
By Chandrama Anderson | 2 comments | 3,047 views