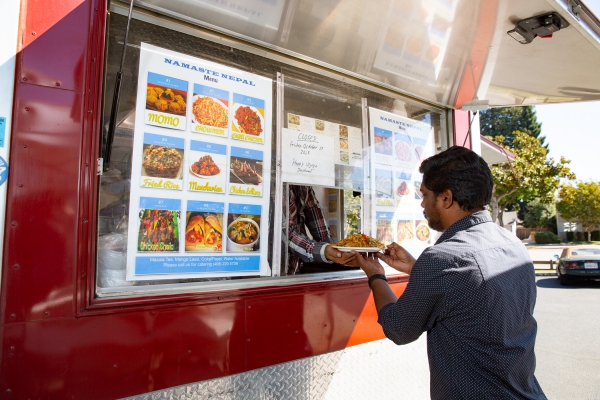 A customer gets chow mein at the Namaste Nepal food truck in Mountain View. Photo by Natalia Nazarova. 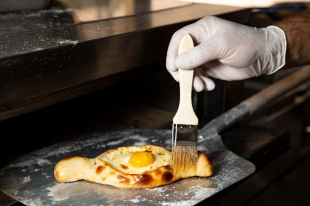 Georgy Khatoev puts the finishing touch on khachapuri adjaruli, a Georgian cheese bread with egg, inside his food truck in Mountain View. Photo by Natalia Nazarova.

On a warm afternoon in Mountain View, as cars whizzed past on El Camino Real, I enjoyed my first-ever khinkali, meat-filled dumplings made by a Georgian immigrant at a food truck.

Less than a half mile away, a Nepalese chef was busy serving momos and chicken thukpa, a Himalayan noodle soup, out of his own truck.

The streets of Mountain View increasingly are a culinary melting pot. Alongside the abundance of taco trucks is a steadily growing fleet of food trucks representing a wide swath of international cuisines: Georgian, Nepalese, the American South, Hawaiian. Food trucks continue to be an entry point for new chefs and restaurateurs, many of them immigrants, eager to break into a competitive and costly industry.

Below are the stories of a few of the trucks making their mark on Mountain View.

Teresa Kasoyan is eager to educate customers how to properly eat khachapuri adjaruli, a boat-shaped, indulgent vessel of bread filled with melted cheese, egg and butter: Rip off the two pointy ends of the bread and use them to mix the fillings. For the khinkali, hold the top of the dumpling, bite into the bottom and slurp out the juices before eating the savory insides.

Kasoyan and her husband, Georgy Khatoev, might be running the Bay Area's first Georgian food truck. They started Kolkhida -- named for an ancient Georgian kingdom known for its wine, food and farming -- in late September.

Both Kasoyan and Khatoev are from Georgia Tbilisi, the Republic of Georgia. Khatoev, the chef of the family, moved to Moscow when he was young and grew up there.

Kasoyan left Georgia for the Bay Area when she was 9 years old. Two years before, her mother, now the dean of enrollment services and international student programs at Foothill College in Los Altos Hills, had seized an opportunity for freedom. Her husband was abusive, but divorce was taboo in their culture, Kasoyan said. He died in active duty and "that opened up a way for her to leave," Kasoyan said.

Kasoyan joined her mother in Palo Alto, eventually attending Gunn High School for a year and then a private high school in San Jose.

Kasoyan and Khatoev, who have known each other since they were kids, spent two years looking into opening a restaurant but the costs -- rent, labor, insurance -- seemed prohibitive. They opted for the truck, where Khatoev serves up traditional Georgian dishes: lamb skewers, beef khinkali, sacivi (chicken cooked in a sauce of walnuts and spices) and three kinds of khachapuri.

There's also badjirani, a side dish of luscious roasted eggplants, and phikali, a deep-green mixture made from spinach, walnuts and garlic. Walnuts abound in Georgian cuisine. Wash it all down with a glass bottle of tarragon- or pear-flavored Zedazeni soda, straight from the Republic of Georgia.

The truck already has attracted Georgian customers -- there are large contingents in Redwood City and San Jose, Kasoyan said -- as well as Russians and Armenians. And for the uninitiated, the owners are more than happy to educate them.

The dream, Kasoyan said, is to open San Francisco's first Georgian restaurant. (Palo Alto recently got its first one with Bevri, which opened on University Avenue in February.)

Growing up in Nepal, Deepak Thapa learned how to cook from his mother. He often cooked for himself out of necessity, when no one was home, he said. Food stuck with him -- he went on to attend culinary school in Dubai and worked as a chef on an international cruise ship.

When the ship landed in San Francisco eight years ago, Thapa decided to stay. He put down roots in Sunnyvale and worked in Indian restaurants, including the well-known Amber India and for a time, a Nepalese restaurant in Seattle.

Thapa struggled to make ends meet in the expensive Bay Area. He drove a Yellow Cab in the morning and manned the stove in restaurant kitchens in the evenings. In early 2018, though, he decided to take the plunge and start his own small business.

With the support of a few friends, Thapa started Namaste Nepal, a food truck serving the dishes he grew up eating. Many customers are unfamiliar with Nepalese cuisine, though he said there's a growing number of Nepalese immigrants in the Bay Area.

When they see Nepal, "They are thinking Mount Everest," Thapa said. "They say, 'What kind of food?'" He tells them: "Nepalese is like Indian, like Chinese."

His menu is small, but it offers an education in the fundamentals of Nepalese street food. There are meat and vegetarian momos, the increasingly popular dumplings; chicken thupka soup; and chicken choila (grilled, marinated chicken) alongside chow mein, fried rice and fried chicken lollipops. Thapa also makes chilli chicken, ubiquitous on Nepal's streets. For drinks, the truck serves masala tea and mango lassi.

Thapa managed to snag a permanent parking spot for his truck in the large parking lot of a Chevron station on El Camino Real, with room for tables and chairs.

Most chefs lament the family time lost to working long hours in restaurants. Rod McGee started a food truck to bring his family together.

McGee, who was born and raised in Mountain View, started The Cookout last year with his fiance, Atira Lewis, who grew up in Palo Alto. He graduated from Los Altos High School and she, from Gunn High School. McGee coaches after-school sports teams at Pinewood School in Los Altos Hills and Lewis is a preschool teacher at a child care program for Stanford University employees. They have four children, ages 26, 18, 16 and 9 years old.

"My family was getting bigger but everybody going different ways so we found a way to tie our family back together a little bit. We decided to start a food truck," McGee said.

They considered serving barbecue but settled on fish and chips -- something they all enjoy eating and felt they could "cook well, consistently," he said.

Each member of the family plays a part in The Cookout. The four kids help with food prep, sales and social media.

"It gave everybody some responsibility within the family and also it made people work together," McGee said. "I got kids in college, I got kids working and I got kids in school. It brought all my age groups together to achieve a goal."

The Cookout, Mountain View; check facebook.com/thecookoutft for schedule and location.

A Pragmatic Approach to A Trillion Trees
By Sherry Listgarten | 1 comment | 3,272 views

The University of California’s flexible policies during COVID-19
By John Raftrey and Lori McCormick | 6 comments | 2,288 views

Repairing a Disagreement with your Beloved & “Physical” vs. “Social” Distancing
By Chandrama Anderson | 1 comment | 2,076 views