Six vie for two seats on Palo Alto school board 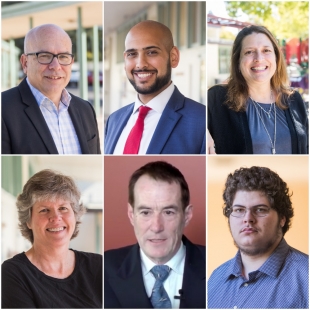 With the coming election of two members to the Palo Alto Unified School District Board of Education, voters have the chance to shape the future of a district that finds itself at a pivotal juncture.

After several years of controversies and crises, including financial errors, the mishandling of sexual misconduct, management turmoil and a student suicide cluster, the school district appears to be on the brink of a new era. The district has a new superintendent who is reimagining the personnel, operations and vision of the district office. A near-clean sweep of top administrators has resulted in a new human-resources director, chief business official and chief academic officers, among other positions.

While some progress has been made on key issues in the last four years — legal compliance, the achievement gap, special education, student mental health — many in the school community want to see more from their elected officials on these and other issues.

The board also faces the difficult task of healing a community that is divided in many ways, with fissures both philosophical and racial uncovered by contentious debates over weighted grade-point averages, the renaming of a middle school after a Japanese-American alumnus and sex-education curriculum.

Whoever is elected to fill the two open seats on the five-member school board will shape and inform this next stage in the district's history. There are six candidates: special-education advocate Stacey Ashlund, after-school-program director Christopher Boyd, incumbent Ken Dauber, attorney Shounak Dharap, parent Kathy Jordan and recent graduate Alex Scharf.

The two elected members will join Melissa Baten Caswell, Todd Collins and Jennifer DiBrienza at the dais. Current trustee Terry Godfrey is not running for re-election.

(CHART: Where they stand: The candidates' views on six key district issues.)

Also on the November ballot — though not covered in this series of candidate profiles — is Measure Z, a bond measure that if approved, would fund the next 20 years of capital improvements at the schools. Voters will also have the opportunity to support or oppose term limits for trustees. If approved, Measure Y will limit board members to two, four-year terms in office. Read the Weekly's editorial endorsements on Measures Y and Z, which were published on Sept. 28, here.

Watch videos of the Weekly's Sept. 20 school-board debate here and endorsement interviews with all of the candidates on our YouTube page.

Read profiles and watch videos of each candidate:

Watch Weekly journalists will discuss this year's Palo Alto school board race on "Behind the Headlines".

Sarah1000 is a registered user.


I served with Stacey on the SELPA 1 Community Advisory Committee for over a decade and believe that she would be a great addition to the PAUSD Board. She knows how to disagree without being disagreeable and will help bring administration, parents and teachers together to support students.

Facts and Figures is a registered user.


For those of us blown away at the current accusations against Supreme Court candidate Kavanaugh and supportive of the claims of Christine Blasey Ford and we as #MeToo, Kathy Jordan is a bright light. She single handedly pushed the Board and District to address its inadequate handling of the investigations of two claims of sexual assault, one of which was against a sexual predator who was known to the administration. Kathy Jordan's impact on District Title IX compliance is extraordinary. For the Weekly to ignore her positive impact is unacceptable journalism.

In addition, neither of the candidates for School Board supported by the Weekly stand for the outstanding academic performance for which many of us moved here. I will only support candidates who support the appropriate level of challenge for ALL students. [Portion removed due to factually incorrect statements.]

Please community. Look deeper at the impact this School Board is having. Stand up for strong schools. And, that does not just mean schools with nice facilities. It means schools with academic challenge for all students, low, average and high performing.

15 people like this
Posted by Resident
a resident of Another Palo Alto neighborhood
on Oct 5, 2018 at 3:31 pm

When I look at one of the biggest, most contentious issues that has taken place by our irresponsible school board's ineptitude over the past term when they bowed to the pressure of one student and family to change the names of two of our schools and then had the audacity to name them after other individuals, I am totally shocked that anyone should choose to vote for any of the incumbents.

Has everyone forgotten about how they paid no attention to the calm voice of reason? We cannot let people who are so easily allowed to drift their thinking have the chance to be in a leadership position again.

Report Objectionable Content
Email Town Square Moderator
3 people like this
Posted by Wow
a resident of Adobe-Meadow
on Oct 5, 2018 at 9:41 pm

Wow is a registered user.

This is just wrong. You are confusing the flashing light on the front of the machine with the actual works. She made a lot of noise and yes, things did change - but her noise did not cause or even influence the change. She did good to stand up at a board meeting, but that's about it.

"Stripping laning from our schools (I believe advocated by both Weekly supported candidates) means that kids of all academic performing levels will be placed in the same classroom."

Eliminating laning? When did anyone ever propose that? Over the last 5 years, teachers have proposed a total of two lane combinations - Eng 9/9A at Paly and Alg 1/1A at Gunn. The first was effectively done; the second is still in a pilot. It sounds like someone has been selling you a bill of goods.

Report Objectionable Content
Email Town Square Moderator
10 people like this
Posted by momoftwo
a resident of Leland Manor/Garland Drive
on Oct 6, 2018 at 6:16 am

momoftwo is a registered user.


Sorry Wow -you are misinformed. About three years ago, Max McGee and his Deputy at the time, Markus Autrey, proposed reducing math lanes at Paly from 5 to 2. They reasoned that it was more motivating for students in the lower lanes to be in lanes with the other students. They also claimed that teachers would be able to teach 2 different curriculum to students in one class because the teachers could differentiate in the classroom. I was one of 8 parents that spoke against it at the PAUSD board meeting where it was proposed. There have been a number of changes made that are done for one group of students at the expense of other students. Blended science classes is another example. Blended Chem and Chem H classes at Paly are a disaster. The teachers only get time to cover regular Chem topics and not the Chem H material. The students who really want the Chem H material are left scrambling to learn it on their own. Yes, our family experienced that too.

Report Objectionable Content
Email Town Square Moderator
3 people like this
Posted by Wow
a resident of Adobe-Meadow
on Oct 6, 2018 at 6:59 am

Wow is a registered user.


So, let's say that is correct: two people, both of whom left the district abruptly under a cloud and who haven't worked here for over a year, talked about something at a board meeting? What does that have to do with this year's school board race?


Thank you, Elena, for publishing the chart. It's a great way for voters to see which candidates have positions which align with their own. This is much more useful than endorsements because everyone has different positions on the issues.

The first few seconds after awakening; before I remember the virus
By Chandrama Anderson | 0 comments | 3,018 views

Can you stay healthy without making more trash?
By Sherry Listgarten | 4 comments | 2,420 views

Think about helping others in our coronavirus-affected area
By Diana Diamond | 5 comments | 2,230 views