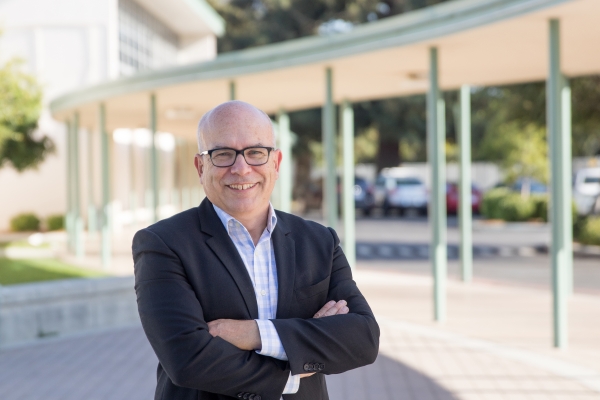 Ken Dauber, the current president of the Palo Alto Board of Education, says he's made good on his promises from the 2014 school-board campaign, including in the areas of Title IX compliance, increased mental health services for students and more effective, transparent governance. Photo by Veronica Weber. 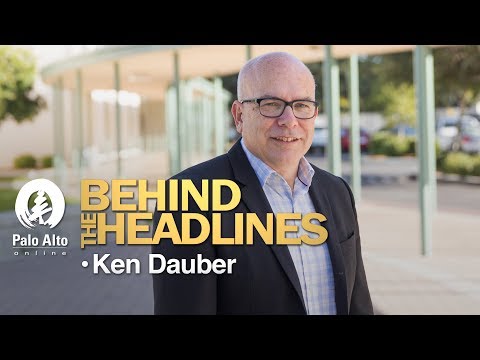 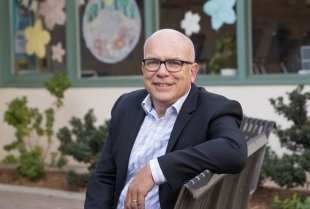 Palo Alto Board of Education President Ken Dauber is running for a second term in the Nov. 6 election. Photo by Veronica Weber.

Ken Dauber, as the sole incumbent in the Board of Education race, is in the unique position of having of four years of votes and actions to point to — and answer for — in his re-election bid.

He sees the district of 2018 as drastically different than when he was elected in 2014, with progress made on several of his 2014 campaign promises, including improved compliance with federal civil-rights law Title IX; more effective, transparent governance; increased mental health services for students; and stronger district leadership, he said in an endorsement interview with the Weekly. He attributes much of that progress to his own advocacy and steps he's taken as board president this year.

Perhaps no more illustrative of that is the district's changed relationship with the U.S. Department of Education's Office for Civil Rights and approach to Title IX compliance. In the 2014 election season, Dauber was the first candidate who firmly said he would repeal a board resolution criticizing the federal agency's investigative practices, which the board then did last February. He said he insisted on the new board discussing the district's resolution agreement with the Office for Civil Rights only in open rather than closed session, as the previous board had improperly done. Since last spring, when reports of student sexual violence roiled the community, the board has hired a full-time Title IX officer and asked a national law firm to investigate and produce a public report on the district's response to incidents of sexual assault.

"The district's compliance is now, I think, robust (and) effective — not perfect; it takes time to turn the whole system. But we are night and day compared to where we were before," Dauber said, noting that Catherine Lhamon, chair of the United States Commission on Civil Rights, has described Palo alto As the "model for K-12 Title IX compliance. That's just impossible to imagine four years ago."

Dauber, a Google software engineer, made his first and unsuccessful bid for school board in 2012. He won in 2014, securing the most votes of the candidates.

Dauber's years on the board have been tumultuous. He sat on the dais through a student suicide cluster, the conclusion of the Office for Civil Rights' yearslong investigation into sexual misconduct in the district, major financial errors, multiple community flare-ups over various district issues and Superintendent Max McGee's sudden departure, which many in the community perceived as a forced rather than voluntary resignation.

In those years, he cast minority votes on several key decisions. In 2015, he was the only member to vote against renewed contracts with the district's main law firms, with concern about the decreasing quality and increasing cost of a particular firm, Fagen Friedman & Fulfrost. His proposal to instead issue a request for proposals to seek new firms failed at the time, though the board did replace Fagen Friedman & Fulfrost the following year.

In 2016, Dauber was the sole school board member to vote against a multi-year contract that gave teachers and staff a 12 percent base-salary increase over three years. He had advocated instead for 3 percent raises each year over those three years, plus one-time bonuses, so that could instead hire more teachers to ensure smaller class sizes.

Then, in 2017, the board discovered that senior staff had failed to formally notify the unions that the district planned to exercise its option to reopen negotiations, as required by the contracts, with the intent of cancelling the raises after a misestimate of property tax revenue left the district in a budget shortfall. The error would cost the district almost $6 million in unplanned raises.

When asked whether the board bears some of the responsibility for the contractual error, he said it's "impossible for a board member and inappropriate, I think, for the board to see its role as checking in to see if those things are actually done.

"The board's responsibility then in the face of a failure like that is to review the senior management's role and take appropriate steps, which is what I did."

Generally, Dauber sees the board as an oversight body that hires and fires the superintendent but says it should be more hands-off in management and pedagogical decisions.

This summer, as board president, Dauber cast the sole dissenting vote against new Superintendent Don Austin's contract. He declined in his interview with the Weekly to explain that decision further than to say Austin was the "third white male in a row in that role." He said, however, he has "a lot of confidence that he's going to be an effective leader for this district."

Dauber is heartened by progress the district has made on student mental health, the issue that propelled him to community advocacy before his first school board bid six years ago, though he's says there is still more to be done. During his tenure, Dauber proposed the elimination of academic classes during the high schools' early morning zero period, advocated for years for a teacher-adviser program at Gunn High School and has stressed the importance of the district's homework policy, which has been unevenly implemented since its adoption.

Dissatisfied with the progress on the homework policy, he said teachers need more direct feedback and metrics on student homework loads to make any adjustments. The policy as it stands is akin to, he likes to say, giving teachers a speed limit but taping over their speedometers.

Dauber also thinks that starting small, by having individual teachers and schools experiment with and assess different methods for reducing homework load (as they were recently given permission to do by the district office), will help overcome roadblocks that have hindered progress.

"That kind of approach doesn't replace a practice like a districtwide method for gathering and providing to teachers data about homework time, but it does help move forward with the full set of changes needed for something like homework — and can be used for a wide range of practices like curriculum changes," Dauber said.

Several years of crises also have made it difficult for the district to focus on changing core practices like homework philosophies, Dauber said.

"One of the things I've observed as a community member and now as a trustee is that it's a lot easier to make changes around the edges than it is in the core of how the system is operating. Homework is part of the core," he said.

He's hopeful that, if re-elected, his second term will be a time to focus on the core rather than the crises. To address the district's achievement gap for minority and disadvantaged students, for example, Dauber wants to hold principals and senior leadership, including the superintendent and chief academic officers, accountable for measurable progress on specific goals in their performance evaluations.

Progress on special education could be monitored by scheduling regular board updates and appointing himself as the board's liaison to the Community Advisory Committee (CAC), which advocates for special-education families, he said.

Dauber disagrees with the criticism that high turnover at the district office has created a culture of fear in Palo Alto Unified and doesn't see a need to "rebuild bridges" with staff.

"The best thing that the board can do for faculty and staff is to administer the district, to govern a district that works well, that has as few crises as possible, that's legally compliant and that can focus on the core job of educating students," Dauber said. "That's really what I've tried to do."

• My favorite quote: "The arc of the moral universe is long, but it bends toward justice." — Martin Luther King Jr.

Read more about this year's Palo Alto Board of Education candidates here.

Can you stay healthy without making more trash?
By Sherry Listgarten | 7 comments | 3,336 views

Think about helping others in our coronavirus-affected area
By Diana Diamond | 7 comments | 3,028 views

The University of California’s flexible policies during COVID-19
By John Raftrey and Lori McCormick | 6 comments | 1,693 views