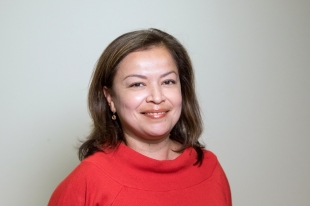 Maria Chavez, an after-school program director, has withdrawn her candidacy for the Ravenswood City School District Board of Education. Photo by Veronica Weber.

Maria Chavez, an after-school program director running for a seat on the Ravenswood City School District Board of Education, announced Wednesday night that she is withdrawing from the race and endorsing another candidate.

At a candidates forum in East Palo Alto, Chavez said she decided to withdraw after conversations with community members and the Ravenswood teachers union, whose leadership has reportedly discussed with candidates they did not endorse about pulling out of the race.

"As a strategy not to split the votes and to ensure that there is a change in leadership at the school district level I am fully endorsing Tamara Sobomehin," Chavez said. "Her vision to 'recharge Ravenswood,' her vision of uniting our community and her promise to create policies and systems that promote success for all students are some of the reasons why I will be endorsing her."

Sobomehin is a longtime community volunteer who works at StreetCode Academy, which provides free technology, entrepreneurship and design education to youth and families. The "recharge Ravenswood" campaign slogan — which Sobomehin shares with candidate Laura Nunez as part of a slate — aims to convey their "goal to inspire and facilitate renewed energy around the participants and policies of the Ravenswood district" while also acknowledging the ongoing, "often unseen" work of teachers and staff.

Chavez told the Weekly that the union did not ask her to withdraw, but they talked "about strategies to ensure votes for new candidates. I believe this was discussed with all of the new candidates as well."

Chavez, a former district employee and graduate of the district who now works at a Redwood City charter school, said she plans to continue to stay involved in Ravenswood by volunteering with "organizations where I can directly work with students."

There are now six newcomers facing off against three incumbents — board President Ana Maria Pulido and members Marcelino Lopez and Charlie Mae Knight — for three open seats in the Nov. 6 election.

The first few seconds after awakening; before I remember the virus
By Chandrama Anderson | 0 comments | 3,594 views

Can you stay healthy without making more trash?
By Sherry Listgarten | 6 comments | 2,987 views

Think about helping others in our coronavirus-affected area
By Diana Diamond | 7 comments | 2,720 views