A health scare, then a new restaurant

Husband and wife Rahsaan Dean and Maria Neal, center, owners of Caffe Machiavello, stand with their children, from left: Brian, 16; Sean, 8; Isabella, 6; and Kurt, 14. All four kids are often at the restaurant after school working on homework and helping out in the kitchen. Photo by Veronica Weber. 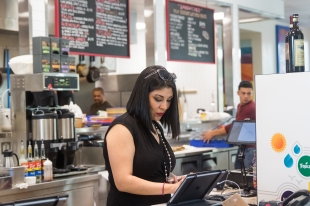 Maria Neal opened Caffe Machiavello after having a kidney transplant she was given 14 percent chance of surviving. Photo by Veronica Weber.

Two months after getting a kidney transplant she was never supposed to survive, Maria Neal opened her first restaurant.

It might sound like a recipe for chaos or, at the very least, excessive stress for someone recovering from a serious surgery. But for Neal, a 36-year-old mother of four from Peru, it was a change that she says has saved her life.

Neal, who lives in Menlo Park, opened Caffe Machiavello in the ground floor of Park Plaza Apartments at 195 Page Mill Road in Palo Alto in early August. The idea for the restaurant was born three years ago, when Neal, who was born with polycystic kidney disease, fell and harmed her kidneys. Her nephrologist told her she had a 14 percent chance of making it to her kidney transplant surgery -- not to survive the surgery, but simply to the day of, she said. She prepared for the worst.

"I had accepted that I was going to die," she said.

But survive she did, with a new kidney from her mother and a new outlook on what's most important to her. She left her job as a real estate agent to spend more time with her three sons and daughter, 16, 14, 8 and 6 years old.

Post-surgery, however, Neal's diet became extremely restricted and eating out with her children became near-impossible. Things were "chaotic," she said.

"I spent the last few years searching for stability ... to leave my kids something behind that they can actually remember mommy by, and for them to know that I was not going to just disappear," Neal said, sitting at a table inside Caffe Machiavello on a recent afternoon. "So I decided to build this restaurant."

Neal was encouraged by a mentor, an older local restaurant owner who had survived cancer twice. (He did not wish to be named.) He is like a father figure for Neal, who lost her father to the same kidney disease when she was a teenager.

He "pushed me to see life in a different way and to not believe what the doctors say necessarily," Neal said, "but to fight."

At Caffe Machiavello (Neal's maiden name), there is a high emphasis on quality of ingredients, largely due to the owner's dietary restrictions. In Neal's words, she doesn't use anything "that I can't pronounce." The bread for sandwiches, the pizza dough and the complimentary cookies brought to every table are all made in house. The kitchen uses a 50-year-old family recipe for the bread, Neal said, and imports flour from Italy for the pizza. They serve thin-crusted, Roman-style pinsa pizza made from Italian flour, olive oil and water.

The kitchen also has to be impeccably clean. Neal's kidney medications lower her immune defenses, making her extremely susceptible to any kind of illness.

The menu is global, with bruschetta and pizza next to hamburgers and chicken wings. Peruvian dishes include lomo saltado, steak flambe with onions, tomatoes, cilantro and rice or quinoa; pollo a la brasa, rotisserie chicken seasoned by Neal nightly with spices and aji panca, a Peruvian red pepper; and a quinoa bowl with roasted rocoto, a spicy Peruvian pepper. A deli section sells packaged international foods like Italian salami and Mediterranean spreads.

The wide culinary range is purposeful, meant to serve large families with different tastes and customers with dietary restrictions. Customers who want the kitchen to make them something special only need to ask, Neal said.

It's also reflective of a diverse staff, whom Neal refers to as her "family." She said she plans to give employees a portion of the restaurant's profit as it grows.

Her family helps out frequently. Her husband DJs on a patio during happy hour, while her oldest son works at the restaurant after school.

Running the large, airy restaurant, and all the ups and downs that come with it, has become a welcome respite for Neal.

"This is not allowing me to feel weak or sick. I have not been able to rest ever since I left the hospital," she said. "I think that it helps me a lot. I'm very happy and very energetic, something that I didn't have before."

Had to have an early dinner last night because of a 7pm class. So went by at 4:30pm.
Very friendly owner, seating both inside and out; easy parking off of Park.
They have four main types of food on the menu: Pizza, Mexican, Peruvian, and Sandwiches.
We tried a Pizza, and the Peruvian dish Lomo Saltado (a sort of steak stir fry and flambe). Both very good.
Pizza had a very very good and unusual crust. Crunchy edges.
(Pizza had three sizes, including a "personal" size.)

WOW.........what an awesome article. I am very excited about eating at this restaurant. See, I too have disabilities. I was critically injured in Los Angeles after a Giants game versus the Dodgers on March 31, 2011. Than you very much for the info that you posted.

These local restaurants are donating meals to Bay Area residents in need. Here's how to help.
By Elena Kadvany | 6 comments | 10,825 views

Coronavirus: Plan ahead now for a big outbreak
By Diana Diamond | 18 comments | 3,905 views

Will the Coronavirus Save Lives?
By Sherry Listgarten | 29 comments | 3,728 views