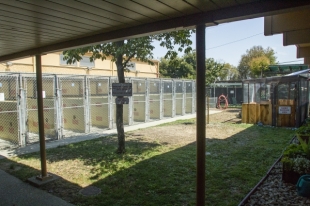 The line of dog kennels sits across from the rabbit playpen at the Palo Alto Animal Shelter on East Bayshore Road. Photo by Ben Hacker.

However, I do not believe (correct me if I'm wrong) that the first paragraph is correct. It says that council agreed to spend the $3 million. Council certainly did strongly signal that they would, when the time comes, do so.... assuming some vague sticking points in the contract are reconciled.

As of now, staff is hammering out the details of a reasonable contract and transition plan, which would need to come back in front of council for approval.

I fully support having a great shelter here in Palo Alto, but I am also confused by Filseth's comment: "In government, we don't get a lot of opportunities to reduce costs and improve services at the same time."

How does this actually save money? Is this an empty talking point, or is there missing context someone could provide? From a distance, it sure looks like our real expense commitments are going up up up. A half-million now, then $3.5 million later, plus $650k per year in perpetuity.

Finally, after reading the link to the initial article (when council did the letter of intent)... it says that Pets in Need agreed to operate the current shelter while they FUND-RAISE to build a new one. It made no mention of a multi-million dollar project in the middle. Is there a reason that's no longer the plan, and we're spending to upgrade and build for them in the meantime?

That initial RFP, then, seems really far from what we're doing. Did we have any chance to assess what other proposals would have been if the RFP said the truth, that we'd pay $3.5 mil on a building project that the winner can largely direct, pay them $650k per year to operate, and be vaguely on the hook for whatever shortfalls arise in their fundraising effort to build their dream facility?

At the end of all of it, I am really glad this is a priority for the city. If we overspend, at least it will be for a great cause with a great organization. But do we have any project managers on the job?

Most of the information is regarding the -shelter- but from the articles about the shelter I don't see anything about the Animal Services department, either its employees, or, the services that are provided to city residents.

Report Objectionable Content
Email Town Square Moderator
2 people like this
Posted by PM
a resident of Old Palo Alto
on Aug 28, 2018 at 12:45 pm

@Anon: AS will continue to operate as a city service, using improved shelter space & co-ordinating closely with PinN

@ForTheRecod: no other organization wonted to take over considering dealing with municipalities is such a pain.
PinN have been considering withdrawing as well.
It's only the state of PA Shelter & high kill rate prevented them from doing so.

They actually offered to build a new shelter with their own money, but wanted to own the new facility, but our fair city leaders said no, you build it, but we'll be the owners.

Report Objectionable Content
Email Town Square Moderator
8 people like this
Posted by For the record..
a resident of Downtown North
on Aug 28, 2018 at 1:03 pm

PM-- Do you mean that Pets in Need wanted the city to gift them millions of dollars worth of land, on which they would build, own, and from which they could execute a city contract? If so, I can see why that was a non-starter.

If, on the other hand, they wanted to procure a site and build their own... and the city said "no, we won't contract that way...." If that were true, then we would need nine new council members.

I think you are being somewhat rhetorical. Cities contract with tons of different groups... Often for mutual advantage.

Report Objectionable Content
Email Town Square Moderator
2 people like this
Posted by Wonderful!
a resident of Crescent Park
on Aug 28, 2018 at 5:14 pm

I am thrilled this is happening! A non-profit partner makes so much sense to manage our shelter.

If the process is bumpy, be patient! It will end beautifully. I was involved in dozens of negotiations like this before I was an old fogey. It's a tricky matter of keeping everyone smiling and remembering why the fit is great while they fight out details in the trenches. Non-profits need to see that a public agency is not a bottomless piggybank, and the city needs to understand that a non-profit isn't going to fork over donations without security. In my opinion, the city is doing this exactly right by pursuing a model that guarantees them long-term use of the facility, with guaranteed minimum funding for defined basic services. Then the provider can raise funds to upgrade to the deluxe version. That model is fair to the group and fair to the citizens pocketbook. It's a proven model for partnerships between passionate, private advocacy group and cities to achieve something phenomenal.

Well done Pets in Need. Get the Weekly to host a fundraising sidebar the day the contract is inked!

Report Objectionable Content
Email Town Square Moderator
3 people like this
Posted by Dog Lover
a resident of Midtown
on Aug 28, 2018 at 8:55 pm

How can it cost $2.1 million dollars to build 16 new kennels? That seems ludicrous. It's more than half of the funds requested.I hope it was a typo.

Rick is a registered user.


This is a good thing. The previous managers didn’t seem fo really care.

Report Objectionable Content
Email Town Square Moderator
2 people like this
Posted by Factchecker
a resident of Los Altos
on Aug 29, 2018 at 7:15 am

@PM not correct. According to past articles the current plan is to lay off all Animal Services staff except for the Animal Control Officers. Not a lot is mentioned about that. It actually speaks volumes that Pets in need was the only applicant. Seems like everyone else knows something they don't.

Flying: How much is enough? It's personal.
By Sherry Listgarten | 5 comments | 1,351 views