From one hand to another | News | Palo Alto Online |

From one hand to another 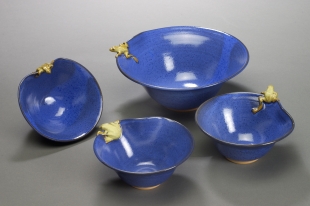 Many of Alexis Moyer's ceramic pieces feature a quirky frog. "They're joyful," Moyer said. "I want people to smile when they see my work." Image courtesy of MLA Productions.

To ceramicist Alexis Moyer, handmade art isn't just for sprucing up home decor or finding a convenient gift for a friend. It's about feeling a connection between yourself and the maker.

Moyer is one of more than 300 artists from across the country who will present their work to an estimated 150,000 attendees at the 37th annual Palo Alto Festival of the Arts on Saturday and Sunday.

The festival will feature a wide variety of functional products like ceramic mugs and bowls, crafted furniture and hand-blown glass, as well as a myriad of other home goods.

Growing up, Moyer never expected to pursue a career in art, but while an architecture major at Cal Poly, she received an assignment to design a campus facility to house a college art department. As part of her research, she toured several art schools and felt drawn to the environment and students' work.

In her fourth year at Cal Poly, she transferred to California College of the Arts as a pottery major.

"My journey was a little backward, but I kind of touched clay and fell in love," she said.

Her top-selling products are all utilitarian and include mugs, bowls, vases, cheese plates, garlic graters, jam jars and more. She also sells wall art with inspirational words stamped on them. She donates a portion of her sales from the wall art to Stanford Hospital.

To Moyer, her art isn't just about making functional pieces, it's also a way to show some creativity. Many of her pieces feature a quirky, ceramic frog and are made into different, irregular shapes.

"They're joyful," she said about the frog motif in her work. "I want people to smile when they see my work."

Having participated in the show for more than 10 years, she hopes to connect with old friends and new customers.

Similarly, glassblower Ingrid Hanson wants to expand her customer base, especially being a local artist from San Carlos.

"I like to make sales, but for me it's about the bigger picture," she said. "I'm developing my customer base and my collectors."

Hanson works as a duo with her husband, Ken, whom she met in a glassblowing class at San Francisco State University. While their art style has evolved over the past 25 years, their creations tend to be contemporary and colorful glass pieces that evoke both feminine and masculine energy, Ingrid said.

"I just think it's nice to have something to beautify your home to escape the ugliness of the world," said Hanson, who has attended the Palo Alto festival for more than 18 years. "That may be your beautiful drinking glass or a bedside lamp that you use to read books."

Woodworker Walter Wogee, who has participated in the festival once, makes rocking chairs out of exotic wood.

The former science teacher said he always had an interest in woodworking, but it wasn't until after his retirement that he started making wooden rocking chairs modeled after those by Sam Maloof, a famous woodworker who Wogee calls his "idol."

Wogee said a good chair is one of the hardest things to make.

"I want to make it out of beautiful wood that has a lot of character, and the wood tends to be expensive," he said. "You just have to take your time and be careful not to make mistakes."

He said that despite the time and work he puts into his chairs, many of which cost as much as $4,000, they're often challenging to sell.

"I get a lot of compliments like, 'This is the most comfortable chair I've ever sat in,' or "If I win the lottery, I'll get it," he said. "It's nice, but I'm always hoping to sell a piece and at least make my expenses."

Palo Alto Festival of the Arts

A Pragmatic Approach to A Trillion Trees
By Sherry Listgarten | 4 comments | 3,981 views

Singapore's oldest cafe was about to open in Palo Alto. Then, the coronavirus hit.
By Elena Kadvany | 1 comment | 2,960 views

Repairing a Disagreement with your Beloved & “Physical” vs. “Social” Distancing
By Chandrama Anderson | 2 comments | 2,675 views

The University of California’s flexible policies during COVID-19
By John Raftrey and Lori McCormick | 6 comments | 2,623 views