One hundred years of Paly: High school to celebrate centennial 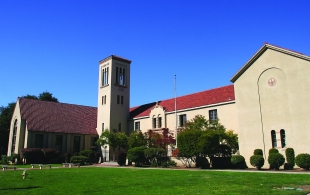 The Palo Alto High School will mark its centennial on Oct. 7, 2018 with a re-enactment of a 1918 march held on the first day of school. File photo by Veronica Weber.

In 1918, a crowd of students, teachers, elected officials and a bugle corp — the 91st Company of High School Cadets — marched from what is now Channing House on Webster Street to their new campus on Embarcadero Road. They lined up outside the Tower Building for a photo to commemorate the first day of school at the new Palo Alto High School.

One hundred years later, this moment and many others in Paly's history will be celebrated in a series of centennial events throughout the school year, starting with a kickoff barbecue next Thursday, Aug. 23.

A 25-member centennial committee made up of staff, parents, students, alumni and community members has been planning events to involve the entire community in celebrating the past, present and future of Paly.

The kickoff barbecue is open to the public. There will be food and musical performances that represent the school's ethnic and cultural diversity, including from Paly's ukulele club, two Polynesian students, a bagpipe player, the school band (which will perform two mariachi numbers) and the Stanford University taiko drummers.

During the barbecue, attendees can tour the campus and learn about its history through student-produced videos that can be watched on mobile devices.

On Oct. 7, the community is invited to re-enact the 1918 march. Paly partnered with the Palo Alto Historical Association to organize the reenactment.

People will meet at Paly, take buses to Channing House and then walk the same route the group took 100 years ago.

Back at Paly, people will gather in front of the Performing Arts Center to dedicate the area between the new facility and the Haymarket Theatre as "Centennial Plaza" (pending approval by the Board of Education). The plaza will include monuments to Anna Zschokke (pronounced SHAW-key), known as the "mother of Palo Alto schools." Zschokke, one of Palo Alto's first residents, spearheaded the creation of Palo Alto's first public school and built the first high school building by mortgaging her home.

"One of the reasons that we're doing this is so we can connect past and present and push towards the future to try and learn from the past — our mistakes, our accolades," said Paly librarian Rachel Kellerman, who is on the centennial committee.

"(Zschokke) wanted open pathways for success ... and she saw that as being vital to the community at the time and that was so unusual. She understood that you had to marshal the community in order to do that," Kellerman added. "Community support of public education is something that is a theme and something to be celebrated."

At the dedication, the school will also honor Palo Alto landscape architect Mary Gordon, who is behind much of Paly's landscape design.

There will also be a musical performance: Paly alumnus Christopher Tin, a Grammy award-winning composer, has agreed to write a song for the centennial.

The centennial committee is involving other school departments and bodies, including drama, history, English, athletics and journalism, to fully integrate the celebration, Kellerman said.

Students are also organizing an alumni speakers program and will design a centennial T-shirt, among other projects.

In March, there will also be a celebration of student newspaper the Campanile's 100th birthday and a ticketed centennial gala.

The Paly Centennial Committee is accepting donations to pay for campus decorations, student projects, the Zschokke memorial, a reunion for retired staff and to underwrite tickets for the barbecue so all families can attend. To donate online go to palywebstore.myschoolcentral.com or mail checks to Palo Alto High School Centennial Fund, 50 Embarcadero Road, Palo Alto, CA 94301.

For more information about Paly's centennial activities, including to purchase tickets for the kickoff barbecue, go to paly.net/centennial.

why can't we enjoy this event without liberal infusions of injustice and fawning of "diversity" . Let's take a 100 year anniversary and turn it to an opportunity to send a message- thanks committee and no donations from me

"One of the reasons that we're doing this is so we can connect past and present and push towards the future to try and learn from the past — our mistakes, our accolades," said Paly librarian Rachel Kellerman, who is on the centennial committee."

Uhhhhh, I have pictures with 100yrs Palo Alto High
went to about 15 years ago.... What was that???
David

The Paly community welcomes all to commemorate this milestone. After a year of planning, organizing and diligent research we put together a worthy celebration. Tickets to first event are almost sold out! Join the fun.

Will there be an appearance by the oldest living alumni from Palo Alto HS as well?

I'm figuring that a representative from around the Class of '36 might be about the oldest at approximately 100 years of age.

Then again, someone remaining from the first class (1918) would be remarkable although they'd probably have to be around 118.

Back in the late 1930s I recall a small gathering of surviving Civil War veterans and some even wore their old uniforms. Most were in their late 80s-early 90s but back then, old people really looked old....as the 50s were not the new 30s or stuff like that.

Once you made it about 60, your days were numbered.

Report Objectionable Content
Email Town Square Moderator
2 people like this
Posted by read the article
a resident of Adobe-Meadow
on Aug 24, 2018 at 8:36 pm

To @ hmmm- why is everything political

There wasn't anything political until you started whining.

Coronavirus: Plan ahead now for a big outbreak
By Diana Diamond | 22 comments | 4,810 views

The first few seconds after awakening; before I remember the virus
By Chandrama Anderson | 0 comments | 2,074 views

Can you Stay Healthy without Making More Trash?
By Sherry Listgarten | 2 comments | 1,391 views