Ten candidates vie for seats on Ravenswood school board

All three incumbents, seven challengers are seeking election in November 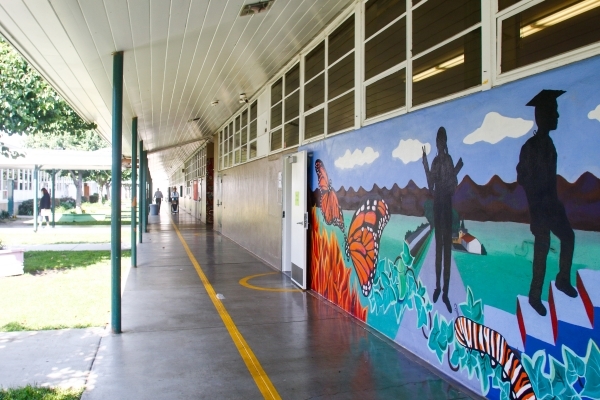 After a rocky year for the Ravenswood City School District, 10 people are running for three open seats on the five-member school board, including the three incumbents. Pictured here, the Ravenswood Middle School in East Palo Alto, which opened last fall, is one recent effort the district has made to improve the education of its students, 56 percent of whom are English-language learners and 89 percent of whom qualify for the federal free/reduced lunch program. Weekly file photo by Veronica Weber. 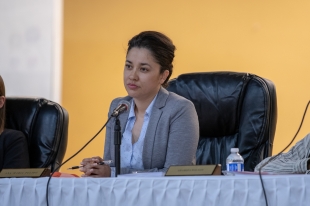 Ana Maria Pulido, the current president of the Ravenswood school board, plans to run for re-election in November. File photo by Adam Pardee.

Pulido communication is not one way.... the examples you presented as communication involve the community listening to you but the board also needs to listen to its community and you have never been about that!!! You need to go!!!!!

Pulido and Knight, you need to go somewhere else. Knight doesn't even speak up at the board meetings. She just sits there seemingly doing not much. She interjects with silly statements that are not linked to what the person is saying. But ultimately I think Pulido and Knight, and probably Lopez, should go because the district protested and demanded the resignation of the superintendent Hernandez-Gaff and they stood behind her. The people of this community stand behind their principles, principals, and not politicians.

About who to choose, I don't know about that too much. Nicole Sbragia and Julian Garcia I know a small amount about. They seem cool, especially Nicole, but Julian I don't know. I feel like he's in it to prove a point not to create change. Maybe I'm wrong about Julian, and maybe one day he will bring change to our area. I just don't know how authentic his intentions are or how much he actually understands about the various aspects of governing a school district.

It might be nice to pull in Fitch if he has experience with Summit, especially since one of the schools will be hybridizing their curriculum into the classrooms. He may be a good resource.

About Crosby. Sorry, but anyone associated with district administration just does not sit well with this voter at this time.

About Maria Chavez. I believe I have met her and, if she's the one I'm thinking about she is genuine based on my brief assessment of her character.

If you vote for Dr. Knight is like voting for the superintendent. Mr. Goff is the one who took the papers on behalf of Dr. Knight, this tells me that she is too involved with Gloria Hernandez, and her husband Duane Goff. Also, there are a lot of rumors that Charlie Knight does not live in East Palo Alto but at the Los Angeles Area. She lives with her daughter who flies her to the board meetings, and then they go back. Dr. Knight owns a lot of homes in East Palo Alto, so it is very easy for her to use one of those addresses. In the past, she was caught doing this when she wanted to run for a seat, but people complained and she pulled out her applications. Why would Goff turn the candidate documents for Dr. Knight? Is it because she is living in Los Angeles? Her daughter could have done it if, in fact, she was not able to do it. Herself. Another thing, not to be rude, but Dr. Knight does not know what is going on anymore. She seems to be deaf and confused at times. She like Marcelino almost never asks questions or makes comments, and the worst thing is that she takes cat naps at the board meetings. There must be some guidelines as to what is the age limit, or health and mental requirements that the candidates need to have in order to run for office.
If you vote for Ana Pulido o Marcelino, they will not listen to the community, remember many people asked Ana Pulido not to renew G.H.G. her contract, but she did it anyway. Marcelino was a coward and did not attend the meeting, so voters would vote for him, and G.HG would not get upset with him. Also at meetings, he does not make questions and all he says is "Let's Work Together." He has been a trustee for 16 years; it is time for him to go.

How can someone question Julians intentions or knowledge of the board when he has been to more board meetings than any other candidate. CHECK THE MINUTES PEOPLE!!!! He speaks at all the meetings!!!! He went to school in Ravenswood and has worked in the schools so he knows the change that needs to happen!!!! VOTE FOR JULIAN!!!!

Report Objectionable Content
Email Town Square Moderator
6 people like this
Posted by Another Julian Supporter
a resident of East Palo Alto
on Aug 12, 2018 at 10:16 pm

I agree. Jualian has been to more board meetings, than any of the candidates. He knows what is going on inside and outside the district. I believe that Nicole, Julian and Stephany will be a great coice. Maria Chavez, dos not sound bad, but remember she is Marco Chavez, he too let Gloria Hernandez do anything she wanted, and even thought he did not think Gloria was doing a good job, he voted yes to renew her contract (the one that just expired). I vote for her only if she could show that she will do a better job than her brother.

Nicole is really invested in our Ravenswood kids no doubt! She is the only one (out of 10) who has a child in the district and she has had other options for her kid. Ravenswood has done her wrong, when she worked there and to her son who has special needs. She went above and beyond to stand up for what’s right when Gloria messed with Todd. She knows what is right and is willing to fight for it. I am not sure who of the prospective candidates is on Gloria’s payroll but I can promise you it is NOT Nicole.

Vote for Mr. Garcia!!
I've been knowing Julian G. For many years he is a person with a great heart. Not only because he is humble and likes to help others, but because he likes justice. He grew up in E.P.A and him like many others, including myself have payed the consequences of the poor educaton given to the children, especially the Latino and Africa American communities. I'm sure that Mr. Garcia is not taking the role for his own benefit but to help the children, ourfuture, to have a better education. The person who has seen and live the struggle is now fighting for education rights! Don't you think is time to see a change? No one will make a change, but a person who was a victim of the educational system.

I want to point out a false claim in this article about Ana María Pulido, it states: “Pulido was born and raised in East Palo Alto and is a product of the city’s schools’’ this is NOT TRUE she attended the Palo Alto School District. I know this because I attended high school with her at Paly for 3 years, so she is not a product of this Ravenswood School District. She didn’t interact with her fellow East Palo Alto Tinsley transfer students, so it comes as no surprise that she doesn’t understand the need in this district. She is doing many things for her own self interest and not thinking about the students or this communities needs.

I recently pulled my sister from Costaño Elementary school and enrolled her in a charter school because she wasn’t receiving adequate instruction and they continually pushed her into the next grade level without any concern to her being behind two grade levels. The entire district test scores are marginally below any other district around us in every subject. And voting to keep a superintendent with very little moral compass who spends district money on hiring family members for made-up postitions speaks to the person Pulido is and how little concern she actually has for this community. She is someone who never interacted with people in her community therefore will never truly understand the needs of the children who actually attend the schools in the Ravenswood School District.

Please do not vote for Pulido in the upcoming elections as she is not the right candidate for this community.