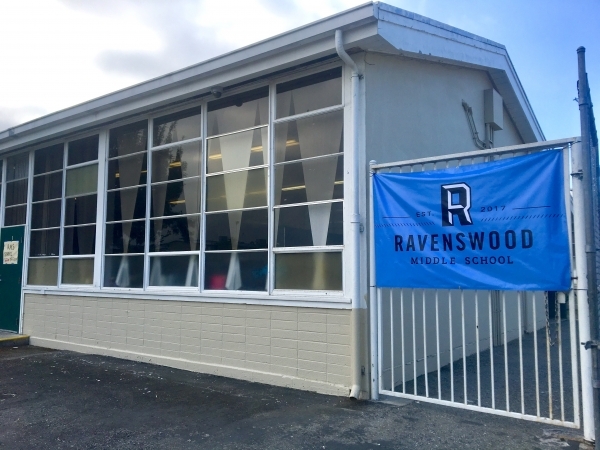 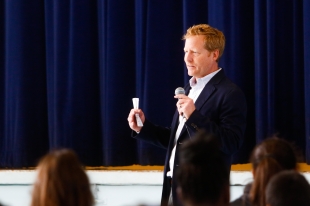 Douglas Garriss greets new students while serving as principal of Ravenswood Middle School on the first day of school on Aug. 16, 2017. Photo by Veronica Weber.

Garris' proposed appointment to Willow Oaks has been met with opposition from teachers and staff members at the school who signed a letter asking Hernandez-Goff and the board to instead promote Vice Principal Michelle Masuda. The letter describes Masuda's "tireless" efforts over the last three years to create a positive culture at the school.

"Looking to our future, as Willow transitions to a K-5 school, a principal with firsthand experience and knowledge of elementary school curriculum and effective elementary methodologies is crucial to help us deepen our instructional practice," the staff wrote.

Principal Chin’s reinstatement as principal of Willow was not due to staff protests. Instead, today’s article shows that the Superintendent does not clearly understand the issues before her. Although Principal Chin is well-respected by her staff, she deserved the promotion to the district office and to have it rescinded is more of a slap in the face. The parents, teachers, and staff did not understand why Vice Principal Michelle Masuda, with her experience and knowledge as well as the strong relationships she has built with the Willow community, was not being given the position of principal when they learned that Doug Gariss was to be moved to Willow Oaks. That was what families and staff members were unhappy about.

After reading this article, it is still sad to see how Gloria Hernandez Goff does not give an accurate account of Willow's leadership. As stated in Concerned Parent's comments above, the staff members and families did not understand how Michelle Masuda was passed up. This article just proves GHG will always hide the truth. I am afraid for the students, teachers, staff memebers, and site administrators of Ravenswood. These good people need superintendent who is honest, selfless, and heartfelt.

Report Objectionable Content
Email Town Square Moderator
5 people like this
Posted by Loves2Teach
a resident of East Palo Alto
on Aug 7, 2018 at 7:51 pm

On the board agenda it says “consideration to approve the appointment of an administrator to director of Human Resources”. Doesn’t Ravenswood already have a great Director of HR?

How much longer do we need to put up with this [portion removed] superintendent? She keeps making a mistake after mistake. Why does she not tell the reporters the real reason why she needed to move the Vice an the Principal from Ravenswood Middle School? She has already given the Principal Position to Sevilla even though the board has not approved of it. She always does this. Why didn't she give a principal position to Michelle Mazuda? She is very qualified. Instead, she gives it to Sevilla, who [portion removed] does not get along with parents, and does not know anything about special education kids. Sevilla already made big mistakes regarding Special Ed. Students at Belle H. Elementary. Gloria preferred to keep Chin at Willow, then listen to the Willow's teacher's petition. Good thing we will be having new elections. The bad thing is that Gloria is already helping someone to run for school board so this way if he wings, she will always have can count on his vote. His name is Daniel Cesana. Gloria also helped Marcelino Lopez financially when he was running. This is why Marcelino never questions her and always approves her decisions or ideas. Do not vote for him. [Portion removed.]

Report Objectionable Content
Email Town Square Moderator
5 people like this
Posted by Seelam Prabhakar Reddy
a resident of College Terrace
on Aug 8, 2018 at 9:02 am


Administrators come and go. We can’t avoid.
Let’s have a great home with loving parents grandparents family friends.
Let’s start it this fall.


Report Objectionable Content
Email Town Square Moderator
5 people like this
Posted by Aisha
a resident of East Palo Alto
on Aug 9, 2018 at 1:20 am

Hernandez-Goff is no different from Bed Bugs. It’s hard to get rid of her.

Report Objectionable Content
Email Town Square Moderator
6 people like this
Posted by teacher
a resident of East Palo Alto
on Aug 9, 2018 at 7:59 am

The long and the short of it is that our Ravenswood superintendent is incompetent. The decisions that she makes and the chaos that she creates, has done nothing but cause regression in our district. Before Gloria came to the district we had enough problems that needed attention, yet she overlooked building capacity and decided that a middle school was the answer to all of our problems. She simply does not have the operational nor leadership skills to lead our district. It is very sad to see bright and dedicated teachers and administrators that were willing to work for considerably lower salaries leave, because of the poor culture of the school district.

Report Objectionable Content
Email Town Square Moderator
5 people like this
Posted by What happened to the fiscal crisis?
a resident of East Palo Alto
on Aug 9, 2018 at 9:09 am

Jack Owens is another consultant Hernandez-Goff would like the board to approve on for tonight's board. He will be working in HR. I do not understand how a second person must be in HR. As mentioned in the above comments, where is Gina Sudaria? The proposal for another will the cost the district $50,000. That is a salary for a teacher, buying more computers, licenses for software curriculum, salary increases for certificated and classified staff. $50,000 could go a long way for the students of Ravenswood, but again, who gets the kicked again, the students and teachers.
If approved, he will make $125 an honur, cannot exceed 405 hours, travel expenses will be compensated, and other perks as well. Here is just an example of the MANY decision making errors Hernandez-Goff is responsible for.

Report Objectionable Content
Email Town Square Moderator
2 people like this
Posted by teacher
a resident of East Palo Alto
on Aug 9, 2018 at 2:22 pm

Yes, Gina Sudaria is being reassigned although she has done an amazing job in her position. She is one of the few people at the district office that has integrity. You can trust her and in this mess of a district, she is a steady force.

Report Objectionable Content
Email Town Square Moderator
4 people like this
Posted by never
a resident of Meadow Park
on Oct 12, 2018 at 11:07 am

To Never,
Are you an student. Did a teacher really said a bad word to you. I want to know, because this things do happened, but if you do not tell, they keep doing it. If you are a student, you are very brave to write it here. This is the only way you are going to change things that are not working. Please respond, you will not get into trouble. I know a teacher at RMS who is very rude to kids and makes them cry. Perhaps she is the one who said the bad word to you.

Report Objectionable Content
Email Town Square Moderator
2 people like this
Posted by Ravenswood Parent
a resident of Stanford
on Oct 13, 2018 at 1:38 pm

By the way Gina got a better position, now she is an assistant superintendent. [Portion removed.]