New energy-efficient appliance can be viewed at Stanford Shopping Center 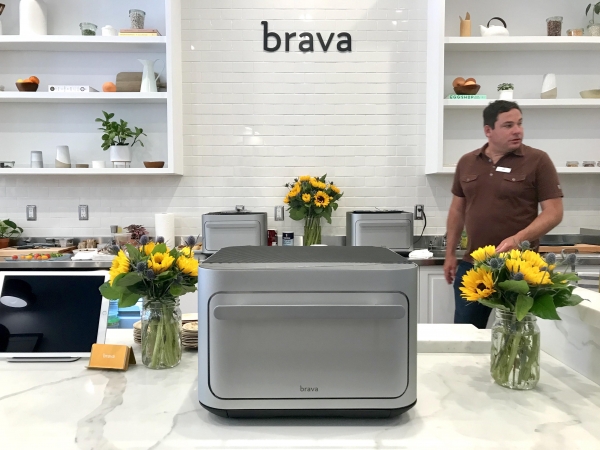 The $1,000 Brava oven made its first public appearance at Stanford Shopping Center in Palo Alto on July 10, 2018. Photo by Elena Kadvany. 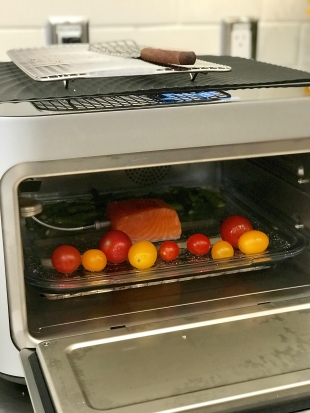 Two Gunn High School graduates have created what they believe is the next big thing in food technology: a high-tech oven that uses infrared light — plus a healthy Silicon Valley dose of sensors, artificial intelligence, Bluetooth capacity and proprietary algorithms — to cook everything from steak to pizza in a fraction of the time it would take in a conventional oven.

Dan Yue and Thomas Cheng are the co-founders of Brava, a well-funded Redwood City startup that until this week has stayed largely mum about the details about its product. On Tuesday, the team debuted the $1,000 Brava oven to the public at the opening of its flagship showroom at Stanford Shopping Center in Palo Alto.

The oven's technology, dubbed "Pure Light," allows home cooks to make meals in a short amount of time. A whole, 4-pound chicken is done in the Brava oven in one hour and steak and potatoes in 15 minutes. At the showroom on Tuesday, a thick cut of skin-on Alaskan salmon came out medium-done and with crispy skin in about 15 minutes, cooked next to asparagus spears and cherry tomatoes.

Inside the 34-pound, 11-inch tall countertop oven are six infrared lamps that project visible and non-visible light onto food, according to the company. The oven has three "zones," allowing proteins, vegetables and starches with different cooking temperatures to cook simultaneously, without any over- or under-cooking. No pre-heating is necessary; the company states the oven can go from 0 degrees Fahrenheit to 500 degrees Fahrenheit instantly.

The startup's proprietary thermometer has five detection points that give readings as specific as one-tenth of a degree. The oven's technology can adjust the frequency of lightwaves "in real time to cook the interior and exterior of foods independently, allowing intense sears on the outside while preserving inner doneness and delicate flavors," the Brava website states.

"It's kind of like having a pan and an oven in this infrared cooker all in one," Cheng said.

Using a small LCD touchscreen on the top of the oven, the home cook can choose to sear, bake, reheat, toast or keep items warm. There are options to customize doneness level for proteins, from rare to well-done, with settings for different cuts of meat and fish. Even toast can be customized, with options for light, medium or dark for different kinds of bread.

A heat-resistant camera positioned inside the oven allows users to watch their meals come to fruition without opening the oven door. The oven is synced to a smartphone app that will send a notification when a meal is done.

The oven is also energy efficient. It can cook a full meal for two with less energy than it takes to pre-heat a traditional oven, Cheng said.

The Brava oven comes loaded with recipes developed by Brava's team of chefs, led by a former Restaurant Gary Danko cook with both culinary and business degrees. The company also operates as a meal-kit service, delivering pre-portioned ingredients to customers for the pre-set meals, such as spatchcocked chicken with Brussels sprouts and butternut squash or a New York steak with mushrooms, onions and arugula salad.

For those who want to create their own dishes and control the temperature of the different zones, there's the more flexible "chef mode."

The seed for Brava was planted six years ago, when Yue noticed his mother constantly going back and forth to the kitchen during a holiday gathering. This memory stuck with him years later, when he ran into Cheng, who had experience in hardware, firmware, manufacturing and heat technology. Yue is also the founder of Green Chef, a meal kit delivery company.

Together, they developed the Brava technology in Cheng's garage. They found a willing partner in John Pleasants -- the former co-president of Disney Interactive Media Group, CEO of Ticketmaster and Samsung media executive -- who helped bring in investors. To date, the company has raised $25 million, according to a spokesperson.

Travis Rea, Brava's head of culinary development and operation, was admittedly skeptical when he first heard about the "smart" oven. He's been cooking professionally for 20 years, including his three years at Gary Danko and a decade in food development at Williams Sonoma. He said he initially dismissed Brava's technology as implausible "Silicon Valley hype" — until he saw a demo himself.

He's now convinced of the oven's potential to revolutionize home cooking for all kinds of people, from busy parents to professional chefs. It's not a replacement for one's oven, grill or microwave, but rather a complementary appliance, Rea said.

The oven, which is selling for $995 and up, isn't available just yet. It's available for pre-order now and expected to ship in November.

This story is similar to the Instant Pot. These two articles give some perspective on that device: Web Link and Web Link The Instant Pot story is at Web Link

It is nice to see the integration of technology to make home cooking better and faster. I hope these Gunn students do well.

"This story is similar to the Instant Pot."

From these stories, it appears they are fundamentally different animals, related by an overlay of geewhizbang digital sensors. The Brava in particular is functionally equivalent to a toaster oven.

Report Objectionable Content
Email Town Square Moderator
6 people like this
Posted by Scooter Mafia
a resident of Adobe-Meadow
on Jul 11, 2018 at 12:32 pm

I smell a new infomercial.

Report Objectionable Content
Email Town Square Moderator
3 people like this
Posted by Jonathan Fox
a resident of Downtown North
on Jul 11, 2018 at 6:13 pm

Thank you for this quality reporting on this new and upcoming technology. I personally plan on buying ten, which I will place at each of my new Palo Alto residences that I purchased with money I made purchasing houses in Palo Alto. I get a special feeling when I see this wondrous invention convert my frozen burrito into a restaurant-quality artisan treat. I can't wait for their artisan-grade temperature-regulated food storage incubator, which I hear is in the works. Gotta catch my Uber - See you at Blue Bottle tonight!

Report Objectionable Content
Email Town Square Moderator
4 people like this
Posted by Nontechnical solution
a resident of another community
on Jul 11, 2018 at 11:50 pm

Way to go, Jonathan! You gave me a genuine chuckle.
I don't plan to be a guinea pig and will wait until I read about the experiences of real users, not professional chefs, possible health effects, blown fuses, whatever.

BTW, another possible response to his mother's need to check on the kitchen so often would be to offer to help her. Old fashioned perhaps but the decent thing to do. And doesn't cost a thousand dollars.

Report Objectionable Content
Email Town Square Moderator
2 people like this
Posted by Frank
a resident of another community
on Jul 12, 2018 at 1:52 pm

Leave it to rich, entitled Silicon Valley techies to try to "disrupt" everything and think that sticking Bluetooth into everything is going to make everyone's life easier.

It seems that this is just an infrared broiler - the ones steakhouses use to cook steaks, but then it says it's just "shining light", which isn't going to cook food Bluetooth or no, so I'll be interested to see how this thing really works.

All the Wi-Fi and Bluetooth in the world isn't going to replace possessing basic cooking skills which millennials seem to have bred out of them.

More millennial retardation. Save time cooking so you have more time to browse instagram.

Singapore's oldest cafe was about to open in Palo Alto. Then, the coronavirus hit.
By Elena Kadvany | 3 comments | 7,413 views

A Pragmatic Approach to A Trillion Trees
By Sherry Listgarten | 4 comments | 4,368 views

Repairing a Disagreement with your Beloved & “Physical” vs. “Social” Distancing
By Chandrama Anderson | 2 comments | 3,072 views