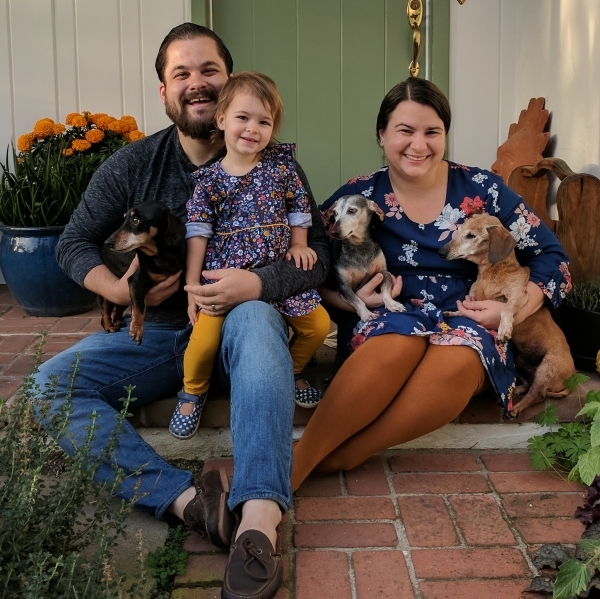 After seeing a gripping photo of a 2-year-old child crying at the U.S. border, Charlotte and Dave Willner of Menlo Park last Saturday morning set up a fundraising campaign on Facebook.

They had hoped to raise $1,500 for the Refugee Immigrant Center for Education and Legal Services, or RAICES, a Texas-based immigrant legal services provider.

Six days later, they've exceeded that goal thousands of times over: As of 3 p.m. on June 22, their campaign had raised a staggering $19.01 million, and garnered donations from 498,000 Facebook users, according to the campaign site.

At one point, for about two hours on Wednesday morning, the viral campaign was raising about $10,000 a minute, according to the San Francisco Chronicle.

The funds raised will be used by RAICES to fund bonds to allow parents to reclaim detained children and offer legal representation for families and unaccompanied children in immigration courts in Texas.

The photo that triggered the Willners' response shows a 2-year-old Honduran asylum seeker crying as her mother is searched and detained near the U.S.-Mexico border on June 12 in McAllen, Texas, according to the Chronicle. It was taken by John Moore of Getty Images.

It has generated some controversy because the child was not separated from her mother for more than a few minutes while they were searched, according to the Washington Post, but has been used to represent the distress that other children who have been separated from their families at the U.S. border are going through, according to witnesses cited in media accounts.

"The photo is heart-wrenching and represents the fear kids face at the border," wrote Malorie Lucich, acting spokesperson for the Willners, in an email to The Almanac. "We're focused on providing RAICES with the resources needed to reunite those kids with their parents as soon as possible."

In recent weeks, more than 2,000 children have been taken away from their parents as part of a Trump administration policy, which seeks to criminally prosecute all immigrants who illegally cross the border, according to the New York Times.

The administration launched a "zero tolerance" immigration policy in April, which laid out plans to prosecute adults who attempt to enter the country illegally and separate them from any children they might bring with them.

Children from Central America separated from their families by immigration authorities at the border have been documented crying and in great distress, including in an anonymous recording released by ProPublica.

More than 100 children in detention are under 4 years of age and the children are initially held in warehouses, tents or box stores that have been converted into border patrol detention facilities, the publication reports.

On June 20, President Trump signed an order ending the policy of separating families at the border, but continuing the "zero tolerance" policy.

Charlotte Willner wrote on the fundraising page: "Make no mistake that the administration is changing course because people spoke out. You spoke out. You showed that you're not okay with this, that none of this okay, and that you won't stand for it. This fundraiser started with the hope of reuniting maybe one family, but it grew. It grew so big that it couldn't be ignored. It grew to a community, to a place that will help all families separated. And it's groups like this and people like you that are responsible for progress in a matter of days, so that mothers and fathers can hug their children again. Your voice and actions matter. Keep them going strong."

RAICES released a June 18 statement, also on Facebook, expressing gratitude for funds generated through the Willners' campaign. "Thanks is inadequate for the work these funds will make possible. We know it will change lives. We know it will save lives by keeping people from being deported to unsafe countries. We've been occasionally crying around the office all day when we check the fundraising totals. This is such a profound rejection of the cruel policies of this administration. Take heart. There are terrible things happening in the world. And there are many people who are deciding not to look away but to do something."

According to Lucich, RAICES has started a joint project to join forces with other organizations so all of the children separated from their families can be located, reunited with their family members and receive pro bono legal help.

She reports that the organization has added staff who will meet the buses that transport immigrants in order to better track "who's where and advocate for them," she told The Almanac in a written statement.

"We also heard that fathers are only allowed to call their kids in detention centers if there’s $25 in their commissary, which of course they don’t have. So RAICES covered this for fathers in detention," Lucich continued.

In addition to running their campaign through Facebook, the Willners have closer Facebook connections. National Public Radio reported that the two previously worked at the company, though now Charlotte works at Pinterest and Dave at Airbnb.

The Times cited Roya Winner, a Facebook spokeswoman, who said the Willners’ page is the largest single fundraiser in the company's history.

Editor's Note: An earlier version of this story indicated that the child depicted in the photograph that inspired the Willners to launch their campaign had been separated from her family. The Washington Post has reported this to be inaccurate.


Sure, raise $16 million for strangers breaking the law but don't lift a finger to help relocate the homeless living in RVs or wondering the street on ECR. What is that liberal saying again, give globally but ignore locally?

Over 80% of the children either arrive alone or with people not their family. The pictures of cages were from the Obama administration and the father of the one on the cover of Time magazine has said his child was never separated. Oooops.

At least the children won't have to pay for their own airplane tickets to reunite them back into the loving arms of the human traffickers and drug smugglers.

On the bright side, I guess the wealthy people in Menlo needed to find other donations since they cannot deduct the interest on their 2nd and 3rd homes anymore.

Report Objectionable Content
Email Town Square Moderator
19 people like this
Posted by Sanctions
a resident of Charleston Gardens
on Jun 21, 2018 at 9:14 pm

"for strangers breaking the law" - it's not against the law to show up at the border and request asylum.

"pictures of cages" - are you denying the cages being used by this administration and their contractors?

Thank you, Willner family. Despite the sour grapes of the whataboutists, most of us appreciate your selfless act.

Report Objectionable Content
Email Town Square Moderator
15 people like this
Posted by Curmudgeon
a resident of Downtown North
on Jun 21, 2018 at 9:33 pm

"Thank you, Willner family. Despite the sour grapes of the whataboutists, most of us appreciate your selfless act."

Report Objectionable Content
Email Town Square Moderator
30 people like this
Posted by @Sanctimonious Poster
a resident of Mountain View
on Jun 21, 2018 at 9:56 pm

1) We really don't need to have alt-right/Trumptard propaganda posted here. There is a reason, after all, why the vast majority of us avoid Fox "News" like the plague.
2) Admit it -- you used "illegals" to do your dirty work. Just. Admit. It.

Report Objectionable Content
Email Town Square Moderator
27 people like this
Posted by Sanctimonious City
a resident of Barron Park
on Jun 21, 2018 at 10:21 pm


The vast majority of citizens oppose open boarders. The need to compensate for your guilt and shame in your heart comes from your knowledge that this immigration tragedy is a direct result of Obama policies encouraging the disgraceful tactic of using children as political pawns.

If wealthy liberals are so generous with their money, how about paying for an extra week of severance and health care as you outsource another factory overseas or hire an illegal immigrant to displace an authorized worker.

Report Objectionable Content
Email Town Square Moderator
22 people like this
Posted by @Sanctimonious Poster
a resident of Mountain View
on Jun 21, 2018 at 10:26 pm


You people fell for that photo? Misassumption. The mom put her down and she started wailing. She was never separated from her mom and several articles state this. Here's one: Web Link

To those of you who want to allow entire countries into our nation, let me inform you that it can't be done. Everyone wants to live in the U.S. Why help these people who are willingly breaking the law? Many of these children are with sex traffickers, NOT their parents. Why not help the children who have been forced into sex trafficking? How about all the poor, starving children in Africa, Asia, etc? How about all the poor, starving children in the U.S.A? Why not help the veterans (who have fought for YOUR freedom of speech and safety) who are now handicapped?

Outside of your Silicon Valley bubble, there are Americans who cannot afford health care or save any money for retirement. And you are helping outsiders who are breaking the law? Why not help the legal immigrants?

I have a friend who left Germany because it's a disaster with the millions of recent immigrants Merkel allowed into their country. They are causing crime and trash.

Report Objectionable Content
Email Town Square Moderator
7 people like this
Posted by iSez
a resident of Palo Alto High School
on Jun 22, 2018 at 3:18 am

“The US government doles out around $1 billion to nonprofits and local government agencies each year to house and provide services for detained migrant children.”

A Pragmatic Approach to A Trillion Trees
By Sherry Listgarten | 4 comments | 4,071 views

Singapore's oldest cafe was about to open in Palo Alto. Then, the coronavirus hit.
By Elena Kadvany | 1 comment | 3,424 views

Repairing a Disagreement with your Beloved & “Physical” vs. “Social” Distancing
By Chandrama Anderson | 2 comments | 2,743 views

The University of California’s flexible policies during COVID-19
By John Raftrey and Lori McCormick | 6 comments | 2,673 views