Around Town: Benz in the Baylands; a path forward | News | Palo Alto Online |

Around Town: Benz in the Baylands; a path forward 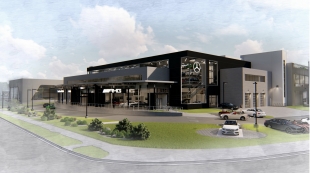 Mercedes-Benz is proposing to build a dealership that would include a roughly 84,000-square-foot building near the Palo Alto Baylands. Rendering by YSM Design.


Too bad the City refused to let Ming's divide their building into a smaller restaurant with a hotel / wedding facility. I miss Ming's.

"If both bodies approve the contract, Concordia LLC will take charge of the community effort to plan for the 35-acre site"

Sometimes I am truly amazed at the amount of work that is outsourced by our city & school board. Don't we have a planning department within the city, why are they not doing this work? Must be nice to have a job where your primary responsibility is to hire outside firms to do work for you at great taxpayer expense.

To clarify, this would be on the site of the former Ming’s and no closer to Baylands Park? If so, seems ok. I just don’t want commercial large scale enterprises encroaching right on the Baylands -

Report Objectionable Content
Email Town Square Moderator
3 people like this
Posted by musical
a resident of Palo Verde
on Jun 16, 2018 at 5:53 pm

I'm always confused. Any explanation for the nearly 50 percent discrepancy?

Seeing the headline on the front page that the City and PAUSD were hiring someone to redevelop Cubberley gave me palpitations until I read further to find out that they are planning to UPDATE it as a community/educational space rather than selling it for housing like with many former school sites. Many current residents probably are not aware of that history.

Report Objectionable Content
Email Town Square Moderator
6 people like this
Posted by cvvhrn
a resident of Midtown
on Jun 17, 2018 at 2:09 pm

cvvhrn is a registered user.


TO be fair in terms of traffic I would rather see the Benz dealership than ANOTHER hotel. Also given the sheer volume of high end Germain autos that grace our streets perhaps we can capture those sales and generate more taxes for the city.

As far as Cubberly goes. I'm okay with contracting out the work. The City does not seem capable of handling this project so why set up a failure cycle. Also for all of its numerous issues PAUSD seems to do one thing well and that is to resist the temptation to sell off its land. I', glad to see it move forward.

lastly Mings. While some lament its loss, we found it to be at best a 2-3 star experience begin overpriced, overrated, and simply not that good

Report Objectionable Content
Email Town Square Moderator
2 people like this
Posted by Judith Wasserman
a resident of Leland Manor/Garland Drive
on Jun 18, 2018 at 11:02 am


Just FYI, this sort of planning is not what city planners do, so that's why the city hires consulting firms. City planners mostly write and defend zoning codes.

Mercedes Benz, I welcome you with open arms! This dealership would be a great addition. I'll be your first customer.

Report Objectionable Content
Email Town Square Moderator
Like this comment
Posted by You'll spend lots of time there
a resident of Adobe-Meadow
on Jun 21, 2018 at 10:54 am

They need lots of service so they need a big shop. It's an ego machine / stupid people's car unless you like to visit the shop.
The sheeple will bleat otherwise, but this inside guy knows better. Thank the stars for those sheeple though. I like my job :)

@You'll Spend Lots Of Time There: Typical response from individuals who can't afford high end cars. Keep working buddy, maybe one day you'll have one yourself.