Five puppies are still available for adoption, according to Humane Society 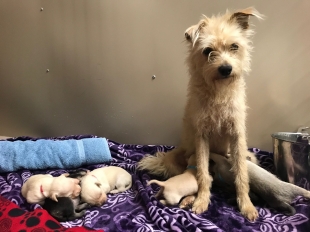 After their rescue, a mother dog feeds her pups at a foster care home. Photo courtesy Peninsula Humane Society/SPCA.

Hoping for a happy ending. is a registered user.


Glad this sweet little family has been rescued! I hope good homes are found for them.

Awwwww is a registered user.


Great story! So nice the mom has already been adopted!

Report Objectionable Content
Email Town Square Moderator
25 people like this
Posted by King James
a resident of Menlo Park
on Jun 11, 2018 at 11:08 am

Queen Elizabeth -- you're a brave, loving mom. May the rest of your days be filled with happiness and love.

Report Objectionable Content
Email Town Square Moderator
14 people like this
Posted by QueenCeleste
a resident of Stanford
on Jun 11, 2018 at 3:26 pm

A big thank you to the man who called the humane society. And to the lucky person
adopting mama dog. All animal stories should have such happy endings.

Report Objectionable Content
Email Town Square Moderator
2 people like this
Posted by Good Dog Mama
a resident of Barron Park
on Jun 12, 2018 at 2:06 am

Whoever took that cute photo with Queen Elizabeth, nice job!

The pups are so cute. Is there any way to know how big they will grow from what they look like now?

Report Objectionable Content
Email Town Square Moderator
7 people like this
Posted by A Human
a resident of Barron Park
on Jun 12, 2018 at 7:26 am

Nice story and rescue. Now if we can all be so compassionate towards humans in this sort of situation the world would be so much of a better place.

Flying: How to lower your impact
By Sherry Listgarten | 10 comments | 2,287 views