New survey also deals a blow to plan to raise real-estate tax; sugar tax is too close to call 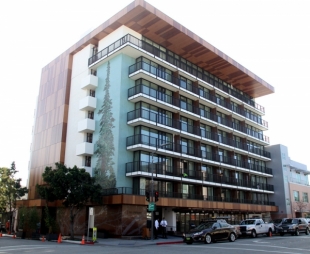 A new survey on Palo Alto voters suggests 62 percent to 67 percent more support for a hotel tax measure on the November ballot. Photo by Veronica Weber.

Arthur Keller is a registered user.


Why was there no consideration of a business license tax or a tax of employers based on the number of employees?

Can we better value engineer the various infrastructure projects? Does it make sense to have a citizen board providing oversight on the Public Works department, so we don't have more debacles like the Mitchell Park Library?

If the City Council had gone with the iconic design for the bicycle bridge over 101 in South Palo Alto, it would have been built by now. Now the bridge will be even more expensive because of the delay, and not look anywhere near as nice.

« Considerable staff and Council work » is not necessary for a sugar tax. Four cities already have the legislation in place and Palo Alto would only need to change the wording. Let’s get this done now.

Report Objectionable Content
Email Town Square Moderator
21 people like this
Posted by Survey Was Misleading
a resident of Crescent Park
on Jun 1, 2018 at 1:11 pm

I was surveyed and the hotel tax question was very misleading. As the attached city study details, I and others were asked if we supported "increasing the transient occupancy tax paid by hotel, motel, short-term rental guests by 2%." A 2% increase sounds negligible and hardly something you can object to. Bur the actual proposal is not to increase the tax by 2%. Rather, it's to increase the tax by 14%. That's because increasing something from 14% to 16% means you are increasing it by 2/14, which is itself 14%. The survey takers just read the questions, so they can't even verify they are really asking about a 14% increase.

I'm sure support would have been lower if those of us who were surveyed had been asked if we want the hotel tax to go up by 14% instead of 2%.

Report Objectionable Content
Email Town Square Moderator
29 people like this
Posted by resident
a resident of Midtown
on Jun 1, 2018 at 1:56 pm

Mountain View is proposing a tax on large employers (which mostly means you know who). I think this makes a tremendous amount of sense because these big companies put a huge strain on local infrastructure, which is developed and maintained by city taxes. I would be in favor of a tax like this before a tax on hotels. It is pretty easy to target a business tax on the companies that are causing the biggest problems to the city, eg only apply it to companies with more than 500 employees and a total payroll that is more than 5 times the minimum wage. Companies with salaries this high can afford a couple of percent in payroll tax.

Report Objectionable Content
Email Town Square Moderator
20 people like this
Posted by Online Name
a resident of Embarcadero Oaks/Leland
on Jun 1, 2018 at 3:37 pm


The same pollsters reported a 20% decline in public satisfaction with PA's direction this year alone and little tolerance for ANY new resident taxes. Yet the city keeps wasting $$$ polling residents rather than doing the hard work to follow the lead of surrounding communities and collecting money from the big employers abd developers.

"Considerable staff and Council work » is not necessary for a sugar tax. Four cities already have the legislation in place and Palo Alto would only need to change the wording. Let’s get this done now."

I remember the CC members bragging about how easy it would be; it would be a real shame if they had to work hard on a business tax.

As for the hotel tax, that's another lazy way out. Let's make all those Stanford patients and their families, and the families of residents visiting here subsidize the developers and big companies who continue to get all sorts of "in lieu" freebies and other gifts.

A city that wastes tens of millions of dollars a year on road furniture and developer giveways doesn't need a cent more of my money.

Report Objectionable Content
Email Town Square Moderator
23 people like this
Posted by Anne
a resident of Midtown
on Jun 1, 2018 at 3:42 pm

Why is the city so reluctant to propose a business tax? If the city won't do it let's do it via referendum.

Report Objectionable Content
Email Town Square Moderator
10 people like this
Posted by resident
a resident of Adobe-Meadow
on Jun 1, 2018 at 4:04 pm

We already have a hotel tax. There is a reason that there are many hotels that are over the border from PA. Are you all trying to encourage people to come here or to discourage them by gouging them for money? The city keeps trying to figure out how to get more money from everyone. So tiring.

Report Objectionable Content
Email Town Square Moderator
6 people like this
Posted by Online Name
a resident of Embarcadero Oaks/Leland
on Jun 1, 2018 at 5:42 pm


At the CC meeting about the hotel tax increase, hotel industry reps made a few interesting points: 1) They hadn't been notified a proposed hotel tax was proposed; they weren't pleased they had to learn about it from the media, 2) They urged the city to read their info packets showing PA hotel receipts were down vs hotels in nearby communities because PA's hotel tax is already higher and 3) their corporate clients were already asking for higher discounts to offset the present tax.

One hotel rep said that in his 20-year career in the hotel industry that this is the first occupancy tax he'd oppose.

PA's history to date on encouraging big business is not to do it. The big box stores on Charleston - the stores are on MV property and the parking lot is on PA property. It was planned that way to avoid PA's big box issues. And the big business in downtown is attacked on a regular basis by commentators on this system. At a meeting on Mitchell Park in the planning stages the reps said that non-profits could reserve for space but not commercial business. This by reps for the city. We can force everyone out by these type actions and then compare ourselves to MV and RWC who are booming with new growth and big business. MP has Facebook who moved out of PA. And now PA wants to punish hotels who built here which upgraded El Camino. Who in the city specifically is pushing for this - name, rank and serial number. Tired of hearing about new taxes. Figure out how to manage a city so you have a balance of all aspects of a city and quit gouging everyone. I am concerned that people we have not voted for by name appear to be running the city and ruining the financial transparency required.

Report Objectionable Content
Email Town Square Moderator
2 people like this
Posted by resident
a resident of Adobe-Meadow
on Jun 2, 2018 at 8:43 am

I do not believe any POLL that suggests that voters would support a higher hotel tax. In case you have not noticed your phone is ringing continually to look for money to support who ever your candidates are and polling companies. I do not answer those phone calls - nor do many other people. Let it go to Message and there will be no message because it is a automated system. The media is selling a concept that assumes that if other people are for something than you also should be for that something. However it is your relatives and guests who are paying those higher taxes when they come to visit. No - not supported by anyone except the people in the city who are now looking at retirement and already know that the state retirement system is grounding in to the dirt.

Report Objectionable Content
Email Town Square Moderator
15 people like this
Posted by Rich Home Owner
a resident of Barron Park
on Jun 2, 2018 at 9:16 am

Of course.
I want stuff and I’d support taxing other people to pay for it. I don’t stay in PA hotels so it won’t cost me a dime.
This is how PA does stuff. Do a poll to see who were willing to tax to get stuff we want. The answer is always somebody else or some minority of voters. The order always is...
1. Non residents
2. Businesses
3. Property owners

And last on the list to be taxed is: “all PA citizens equally”


Report Objectionable Content
Email Town Square Moderator
3 people like this
Posted by Rich
a resident of Downtown North
on Jun 2, 2018 at 9:41 pm

I'll support a hotel tax, if and only of ALL of the hotels in the city are taxed equally. If Airbnb hotels, and that it exactly what they are, taxed like the brick and mortar hotels, I'm not supporting this tax. Period.

Report Objectionable Content
Email Town Square Moderator
3 people like this
Posted by Resident
a resident of University South
on Jun 2, 2018 at 11:19 pm

@Rich
Good idea on linking a hotel tax increase to leveling the playing field with AirBNB rentals. But the last time the city council looked at tightening AirBNB’s, Scharff led the opposition. He is leading the hotel tax increase so your proposal would have to get past him.

Report Objectionable Content
Email Town Square Moderator
2 people like this
Posted by resident
a resident of Adobe-Meadow
on Jun 4, 2018 at 8:43 am

Just so all are aware the major hotels on El Camino have corporate contracts with most major companies that are here on business, as well as government agency rates. Since those deals have already been made for years then the only people who will be charged your new rate are visitors who come in for games, graduation, and your family parties. You can also add in the various travel groups who advertise on TV to get the lowest rates. So what is the point of this? Is it showboating to demonstrate "fiscal responsibility"? I am sure that you will have to hire another group of people to administer this fiasco - another group of city employees to feed and retire. Can you please stop thinking up reasons to hire people to administer strange tax schemes while you are trying to lay-off the auditors who are reviewing the schemes.

Report Objectionable Content
Email Town Square Moderator
4 people like this
Posted by Online Name
a resident of Embarcadero Oaks/Leland
on Jun 4, 2018 at 11:07 am


Re previously negotiated corporate tax rates, absolutely as per the hotel industry's testimony at the cc council meeting where the city yet again failed to notify "stakeholders" of their plans and/or to research the issue.

On NextDoor, there are periodic posts about visiting friends whose corporate per diems price them out of all hotels asking if they can park and sleep in their rental cars in their friend's driveways. There are more frequent posts begging for housing for visiting family members who want to spend a few weeks or months helping with a new baby or trying to make their annual visits.

The city's insatiable greed, failure to do its homework and refusal to create a business tax is appalling. How about cutting spending instead of constantly hiking utility rates and inventing new taxes.