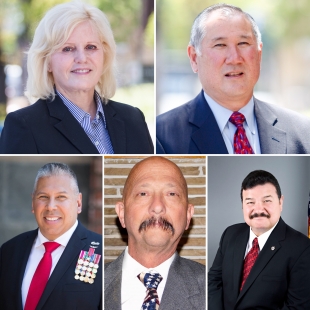 After reading this it’s abundantly clear, John Hirokawa is the right candidate for the job. He had the knowledge to successfully manage the Sheriff’s Office and move it forward. 20 years for anyone one in a position such as Sheriff is TOO MUCH...let’s move on and elect Hirokawa as the next Sheriff of Santa Clara County!

Voting Women. Ask one question of the Laurie Smith. Of all the qualified women who have worked in the Sheriff's Department during her tenure: why has she promoted none above the rank of Captain. It there a new glass ceiling for woman working under Laurie Smith? Just wondering how anyone would vote for a person who limits the advancement of women in the work place?

After consideration of reading each candidate, Hirokawa seems to be a clone of Laurie Smith. So, if we are to elect Laurie Smith or John Hirokawa it will make no difference. Hirokawa was chief of corrections and his leadership resulted in numerous cases of inmate deaths. To give examples, MIchael Tyree was murdered by guards under Hirokawa's leadership. Hirokawa was in charge at the time, I recently found this one as well. Web Link .

One inmate wasn't supposed to be released and was killed in the street. Sadly, I think many voters are simply ok with Hirokawa being involved in murders due to his poor leadership. I will definitely have to think about who to vote since Laurie Smith and John Hirokawa are EXACTLY the same.

We as a community must not vote for either Hirokawa or Smith. Same results will come with either of the two.

The fact that LaDoris Cordell supports John Hirokawa is a strike against him to me. She has been hysterical and dishonest in the recall campaign. The fact that she has attacked Laurie Smith doesn't mean she's right, probably the opposite. Hirokawa was a senior employee for years. The idea that he represents change is silly.

More information about the candidates is available in a May 8, 2018 Mercury News article. It is a worthwhile comparison.
Web Link