Local writers turn play about Levi Strauss into a musical 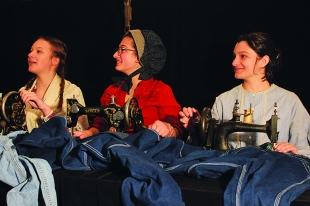 Local youth bring the story of Levi Strauss and his famous denim trousers to life on stage in "Jeans! The Musical." Image courtesy of TheatreGames.

When Jacob Davis and Levi Strauss first received the patent for their riveted denim jeans, they had no idea that those jeans would become an iconic symbol of America alongside apple pie, an emblem of youth rebellion in the 1960s, or the subject of a musical that opens on June 2 in Mountain View.

"Jeans! The Musical" is the brainchild of locals Caryn Yacowitz and Diane Claerbout, who first started writing about Strauss and Davis while writing stories for a Jewish magazine for children, called "Shofar." It tells the story of how two immigrant men "dare to dream the American dream" and succeed beyond their wildest expectations.

So how did the story become a musical, opening in Mountain View in 2018?

Yacowitz had been writing for years -- she started out with a book celebrating the 75th birthday of the Palo Alto Children's Theater and never looked back. But after several years (and many children's books), her love of theater got the best of her. She and Claerbout found a theatrical thread in their story about Levi Strauss and decided to pull on it. And what resulted was a play about hope, ingenuity and working together to fulfill a dream.

Yacowitz said "Jeans!" started out as a play with music. They partnered with their friend Enid Davis, a children's librarian and the former Library Director of the Harker School in San Jose, who had written a musical parody of children's fairy tales for second graders. Using songs in the popular domain, Enid created new lyrics for "Jeans!"

This original version of "Jeans!" had its world premiere in Vermont and then went on to open on stages around the Bay Area.

"People liked the familiarity of the songs with new lyrics," Davis said. "But to publish the play, we had to have original music."

Just over two years ago, Yacowitz, Claerbout and Davis updated their play and turned it into a full musical.

Davis approached her pianist friend Jeremy Erman to help her arrange some original melodies. Together they wrote 14 songs.

To take the music from page to the stage, the trio turned to trusted friend and director Masha Farber founder of TheatreGames, a Russian-language theater school in Palo Alto.

Farber who immigrated from Russia with her two sons 26 years ago, wanted to create a community for children of immigrants, where they could continue learning the language and traditions of their home country and also find common ground in the United States.

So "Jeans!," a story about perseverance, ingenuity and collaboration among immigrants in America, felt like a great fit. The play is "squeaky clean, so it's good for audiences from four to 104," Yacowitz said. Farber staged the original version of "Jeans!" with her younger students, but this time around, she has cast students in grades 8-10.

"Masha has more energy than about 25 people," Yacowitz said. "I've seen her stuff staged, and it's wonderful." While TheatreGames normally stages plays in Russian, "Jeans!" will be performed in English.

The musical is especially timely, because of the current conversation around immigrants in America. While Strauss and Davis were not exactly like the immigrants coming here today, they share some common experiences, Yacowitz said. Davis, the man who thought to add rivets to the pockets of denim work pants, had no connections when he came to the United States. He was "innovative, dogged in his pursuit" of his goals, and his eventual collaboration with Strauss -- the dry goods purveyor who supplied Davis with the denim in the first place -- helped cement their success.

When they wrote the play, the conversation around immigration was not as heated as it is today, but "it was in our hearts," Davis said. And with a cast comprising the children of immigrants, this story is even more powerful. With Levis as a symbol of "American-ness," this musical contributes a positive message in a time when conversations become difficult around what it means to be American. It reminds us about where we came from and where we can still go, if only we embrace the diversity of our nationality.

Freelance writer Kaila Prins can be emailed at kailaprins@gmail.com.

What: "Jeans! The Musical."

Editor's note: An earlier version of this article incorrectly listed the dates for the show.

The first few seconds after awakening; before I remember the virus
By Chandrama Anderson | 0 comments | 2,696 views

Can you stay healthy without making more trash?
By Sherry Listgarten | 2 comments | 1,968 views

Think about helping others in our coronavirus-affected area
By Diana Diamond | 4 comments | 1,880 views