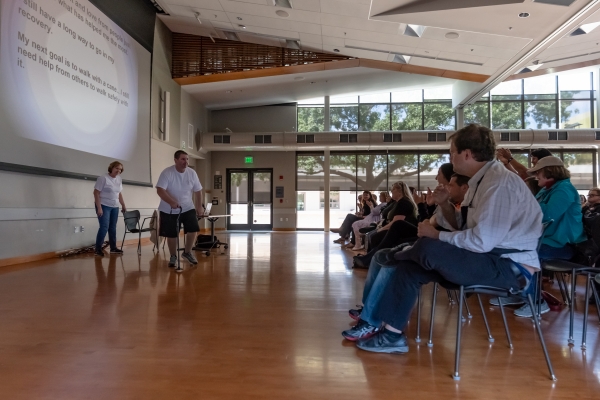 Bryan Stow walks with help from a cane during an anti-bullying presentation hosted by Abilities United's Advocacy Group at Mitchell Park Community Center in Palo Alto on May 15, 2018. Photo by Adam Pardee.

by Eric He / Palo Alto Weekly 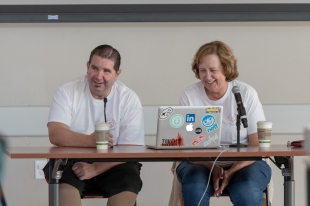 Bryan Stow was assisted by his mother, Ann Stow, who guided him through a slideshow that featured pictures and videos from his life during a talk at Mitchell Park Community Center in Palo Alto on May 15, 2018. Photo by Adam Pardee.

With Survivor's "Eye of the Tiger" blasting in the background, Bryan Stow emerged from a doorway on crutches, walked to a seat next to his mother and was greeted by a standing ovation at Mitchell Park Community Center in Palo Alto on Tuesday.

Stow, 49, a San Francisco Giants fan and former paramedic who was attacked outside Dodger Stadium in Los Angeles following a game in 2011, spoke for more than an hour to a crowd with developmental disabilities at an afternoon event hosted by the Advocacy Group of Abilities United, a nonprofit that aims to improve the lives of the disabled.

His mother, Ann Stow, helped guide him through a slideshow that included pictures and videos from his life, showing the impact that the severe beating has had on him.

He stressed the importance of standing up to bullies, urging people to be "upstanders" instead of "bystanders."

"I have severe brain damage," Stow said. "I have to walk with crutches. Sometimes, I still need my wheelchair. I cannot run. My memory is slow. ... The medication makes my skin turn red and it peels sometimes. The pills made me gain a bunch of weight.

"Does this mean you guys can tease me?"

"No!" the attendees responded in unison.

Stow is using his story to stop bullying tendencies and has spoken at more than 200 events in the past three years.

"I don't think we need bullying in this world," he told the Palo Alto Weekly before his talk. "It's too small to have bullies. You can not like a team but you don't have to take it that far."

The attack, in which two men beat him in the Dodger Stadium parking lot after the Giants' opening day game against the Los Angeles Dodgers, left Stow in a coma for months, fighting for his life.

"The Giants lost that game," Stow told the Weekly, "and I almost lost my life."

Stow survived, but his life was forever altered. From 2011 to 2013, he was treated at five different hospitals. He had to relearn how to speak, walk, write and read.

"I had to learn how to live again," Stow said.

His parents became full-time caretakers. His days revolve around a cycle of taking 13 pills per day, two of which protect him from having seizures. But he has kept improving and kept fighting, transitioning from using a wheelchair to crutches to just a cane. At the end of his talk, he demonstrated walking with a cane to a round of applause.

The presentation was impactful to those in attendance, according to Abilities United CEO Charlie Weidanz, because seeing Stow talk and walk makes a big difference.

"You can read about bullying or you can hear about it, but when you see someone like Bryan, you see the pictures up there, it really hits home about what bullying can really do to change a person's life," Weidanz said.

The Advocacy Group focuses on anti-bullying efforts and inclusion in the community, which has also become Stow's life mission. Rachel Segars, chair of Abilities United's board of directors, has a 10-year-old son with a disability and was inspired by Stow's talk.

"A lot our people go through a lifetime of therapies and a lifetime of difficulties and struggles and I think having someone like Bryan, just watching him progress from a wheelchair to a cane was extremely inspirational," Segars said.

Stow's presentation was followed by a Q&A session, during which several audience members thanked Stow for sharing his journey and inspiring them to live with their own disabilities. Stow evidently did not lose his sense of humor as a result of the attack, cracking jokes and engaging with the audience throughout his talk.

When his mother mentioned that Stow had some issues with short-term memory, Stow shot back at her: "And what is your name again?"

Stow, who has two children, described how he's trying to enjoy life. He works out at the gym. He attends concerts. He loves going on rides at Disneyland. He recently completed a quarter-mile swim challenge in which he swam 19 laps at a local pool. And he still proudly proclaims his allegiance to the Giants, showing off pictures with players and manager Bruce Bochy.

Stow knows his life will never be the same. But his goal is to make sure nobody undergoes the same pain he has, and he feels that it's working.

"I come out to a song, and they just can't believe that I'm walking, talking, smiling, shaking hands and stuff," Stow told the Weekly. "So it makes me feel really good that people are getting that information. I hope people change and everybody likes each other."

Angry is a registered user.

The first few seconds after awakening; before I remember the virus
By Chandrama Anderson | 0 comments | 3,546 views

Can you stay healthy without making more trash?
By Sherry Listgarten | 6 comments | 2,947 views

Think about helping others in our coronavirus-affected area
By Diana Diamond | 7 comments | 2,688 views