Guest opinions: For and against the recall of Judge Persky | News | Palo Alto Online |

Guest opinions: For and against the recall of Judge Persky 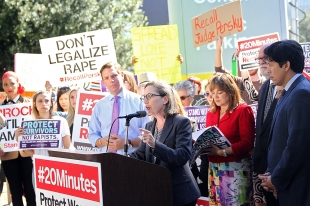 Michele Dauber, committee chair of the Recall Aaron Persky campaign, speaks during a Sept. 2, 2016, rally in San Jose following the release from jail of Brock Turner, to whom Judge Aaron Persky had given a six-month sentence for sexual assault of an unconscious woman. Photo by Veronica Weber.

It’s funny that two PAUSD members would call for Persky’s removal for his leinant sentence for a sex offender. It was their school district who let a convicted sex offender return to Paly. School board menbers shouldn’t be pointing fingers at Persky.
[Portion removed.]