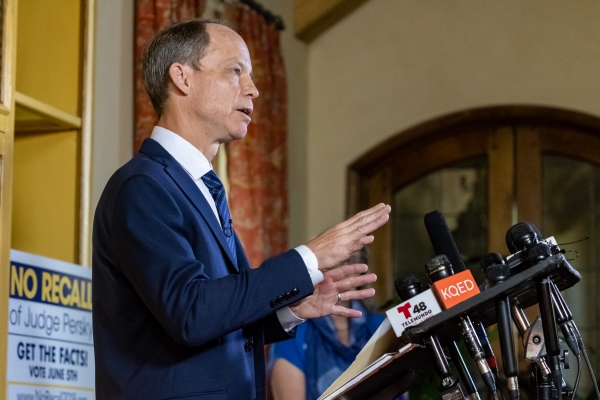 Judge Aaron Persky speaks out at a press conference about his forthcoming recall election in a private residence in Palo Alto on May 8, 2018. Photo by Adam Pardee.

Dilettante is a registered user.


This is an outstanding analysis of the Judge Persky cases that are being hotly debated in this recall. Elena Kadvany really did a thorough job. This analysis dovetails nicely with the analysis conducted by the Associated Press back on June 17, 2016, when they looked at twenty criminal cases Persky issued sentences on and found that he "often follows sentencing reports."
In reading Kadvany's analysis, I see in Judge Persky a man that truly strives to craft sentences that serve our societal demands for "justice," provide the victim with consolation and compensation, punish the criminal (and deter others), yet allow for rehabilitation and restoration of the criminal. In short, he is doing exactly the job that society requires from our judges.

If Persky had such a pattern that the recall advocates claim he did, the question to ask is, why didn't the prosecution address this earlier? Surely the district attorneys office would be tracking judges' decisions and looking for "patterns." The simple answer is: there is not a pattern. Remember too, the district attorney did not appeal, and the D.A. opposes the recall.

Persky's decision in the Brock Turner case was fully investigated by the Committee on Judicial Performance, and his sentence was found to be fully within his permissible parameters. Shockingly, the recall advocates impugn the Committee on Judicial Performance (they say it is one-sided, lacks transparency, and is an "agency with a long history of protecting judges"). These are shocking accusations to be made by a law professor. Recall forces, when asked if the CJP found Persky "clear," flatly reply "No." The facts assert otherwise. The recall movement decided not to appeal to the CJP, stating that: "Instead, we elected to take the issue directly to the people, who are the ultimate protection against judicial bias under the California Constitution." Essentially, the recall campaign made a decision to not follow normal, established, judicial steps by appealing the CJP findings (maybe that is because none of the recall leaders are lawyers?), but instead to muster up enough signatures to force this on to the ballot. This certainly may be a "democratic" way of forcing the issue (hey, we all get to vote!) but is certainly isn't furthering democracy-- in fact, it is a direct attack on the very underpinning of our democracy: judicial independence.

This brings us to the crux of this debate: fiction versus facts, mob-rule versus judicious reasoning. If you tend towards deliberate, objective, unbiased deliberation, the only correct vote on the Judge Persky recall is "NO."

MyOpinion is a registered user.


Voted No, if there was this much outrage about a similiar crime comitted in a poor community, I might feel differently. Much like the recent case of a 17 year old boy robbed of his phone and Cash in Palo Alto, the story has been featured in the Merc News twice this week, if a poor kid was robbed of his phone in a poor section of town do you think it would even be covered?


‘...if a poor kid was robbed of his phone in a poor section of town do you think it would ever be covered?”

How can you compare robbing a person of his phone to rape?

Report Objectionable Content
Email Town Square Moderator
1 person likes this
Posted by Dennis
a resident of Terman Middle School
on May 22, 2018 at 9:55 am

Dennis is a registered user.


Thank you Elena Kadvany for this really excellent piece of work. I hope a lot of people read it.

Report Objectionable Content
Email Town Square Moderator
1 person likes this
Posted by Steve Dabrowski
a resident of Duveneck/St. Francis
on May 22, 2018 at 4:37 pm

Steve Dabrowski is a registered user.


This was a good critical piece of reporting, unlike the Weekly editorial last week. I noted on the latest piece of recall mailers that Kevin DeLeon is supporting the recall. I held him in pretty high regard until seeing that. [Portion removed.]