Message from our publisher: An appeal for your support of good journalism
Just three weeks ago, it was hard to imagine the imminent human and economic impacts of the COVID-19 crisis. Yet here we... Last comment on May 26, 2020 at 10:58 pm | 40 comments

A Teen's Palo Alto
by Jessica Zang
Black Lives Matter: on the topic of protesting and looting
Jun 3, 2020 | 9 comments

Peninsula Foodist
by Elena Kadvany
'All of us can do something.' Local black restaurant owners react to George Floyd protests
Jun 2, 2020 | 12 comments

Toddling Through the Silicon Valley
by Cheryl Bac
Ready for Nothing
May 31, 2020 | 0 comments 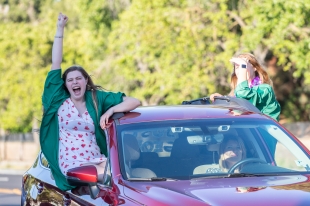 Palo Alto's seniors celebrate an unconventional graduation from their cars, but not without joy
On the night that would have been the class of 2020's graduation, Palo Alto's sidewalks and street corners were full of people cheering and waving as seniors and their families drove in an ebullient car parade around the city. Wednesday, 9:38 PM | 3 comments

City Manager Ed Shikada's sudden decision on Tuesday to impose a curfew in Palo Alto until June 11 is facing a backlash from residents and civil rights advocates. Wednesday, 4:59 PM | 34 comments

Fearing a 'resurgence' of infections, Stanford plans to limit students on campus with mostly online classes this fall

Travel restrictions, half of all undergraduates on campus at a time and primarily online instruction: A Stanford University education will look vastly different when the fall quarter begins. Wednesday, 3:28 PM

Warned of potential looters, some stores board windows to protect their property

With the Midpeninsula already stirred up in recent days over the death of George Floyd at the hands of Minneapolis police, some local shops took precautions Tuesday as warnings spread of organized looting rings. Wednesday, 9:53 AM | 9 comments

Citing budget challenges, Palo Alto is preparing to shelve a long-standing policy that requires city projects to include public art components such as sculptures, murals and digital displays. Wednesday, 9:04 AM | 21 comments

Hundreds of protesters marched through Menlo Park, Palo Alto and East Palo Alto on Monday to protest police brutality in the wake of the death of George Floyd, who was killed while in Minneapolis police custody last week. Tuesday, 12:38 PM | 80 comments

George Floyd and 'the moral arc of the universe': insight from MLK's official historian

'All of us can do something.' Local black restaurant owners react to George Floyd protests
By Elena Kadvany | 12 comments | 4,326 views

Premarital and Couples: Are you Kinder to Strangers than to Your Partner?
By Chandrama Anderson | 0 comments | 2,330 views