Artists 'rock out' at Mitchell Park 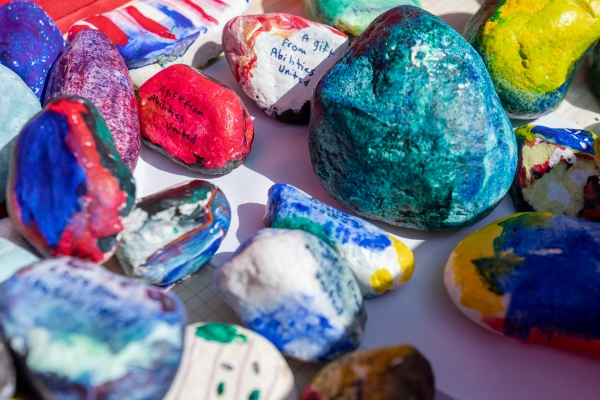 Rocks painted by artists from Abilities United sit waiting to be placed at Mitchell Park in Palo Alto on April 26, 2018. Photo by Adam Pardee. 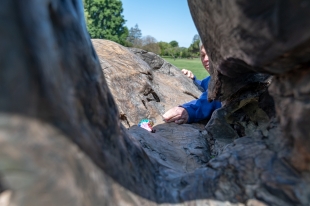 Patrick, an artist and participant in the Adult Day Activities program at Abilities United, places a painted rock inside a sculpture at Palo Alto's Mitchell Park on April 26, 2018. Photo by Adam Pardee.

The rocks scattered behind trees and along the grass at Mitchell Park come in different sizes and in dazzling patterns -- one is covered in polka dots, another displays the colors of a galaxy. Others resemble fruit.

All were placed here on Thursday afternoon by artists from Abilities United, a local nonprofit organization serving those with developmental disabilities, as a part of The Kindness Rocks Project.

Abilities United hosted several art workshops recently in its accessible art studio, where around 40 participants enjoyed painting original, abstract designs onto smooth rocks to distribute to the public. The intent of the project, which took three weeks to complete, is for community members to find the illustrated rocks unexpectedly and for these rocks to brighten their day.

"The community has been so supportive. It's an opportunity to give back," Abilities United CEO Charlie Weidanz said. "It's a random act of kindness to show how much we appreciate the community and it's a unique way of doing it."

Wendy Kuehnl, director of marketing and art program manager at Abilities United, was inspired to have the organization take part in the project after reading stories about it online. The artists for the project were all participants from their Adult Day Activities program.

In addition to being able to give back to the community, the project gave the artists a way to engage creatively and express and communicate themselves in ways they typically may not have the chance to.

"With developmental disabilities, everyone has different needs," said Shay Barnett, Abilities United art program coordinator and organizer of the event.

One participant, who isn't able to use her hands to paint, used a paintbrush attached to a helmet to paint with movements from other parts of her body.

"She was very happy … and it almost made me cry," Barnett said. "She was one of those that haven’t been able to participate (in previous art classes). She has no mobility. For her to be able to paint without someone holding her hand -- it was huge."

She also said some had an easier time working with the surface of the rocks as opposed to surfaces of blank paper.

With a $7,000 grant from the Palo Alto Rotary, Abilities United had opened an art facility last fall with many tools and supplies that could accommodate various needs. The new desks can be moved in every direction and tennis balls, rollers and other objects serve as artistic mediums since traditional ones like paintbrushes can often be too hard to grip with precision.

"A lot of these people aren't verbal so people think they have nothing to communicate," Kuehnl said. "But with this, they can express themselves and you can see it in their face."

On Thursday, the artists spent about an hour walking back and forth with their rocks, trying to hide them in various locations around the park.

"It was wonderful," Jeff Mcdonald, one of the participants, said. "Maybe they'll see my name on one."

Mitchell Park was chosen for the event as it was built to be entirely inclusive and wheelchair accessible, and is a familiar location for Abilities United members who retreat there for lunch and to volunteer and take part in other activities.

"It was great to be outside, enjoy the weather and spend time with people. I hope it's a nice surprise for people to find the rocks," Nathan Hechtman, a volunteer with Abilities United, said.

Anyone who comes across a rock can take a photo of it and share it online to connect with others across the country participating in The Kindness Rocks Project, Kuehnl said.

Can you stay healthy without making more trash?
By Sherry Listgarten | 7 comments | 3,340 views