Around Town: paper or plastic; a family legacy

Also, a Palo Alto woman who survived the Holocaust is honored at the state Capitol 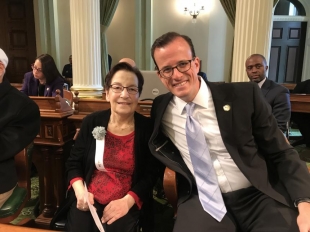 In this week's Around Town column, a Girl Scout troop persuades the City Council to take action against plastic straws, the family of Frank Greene Jr. reacts to news of a school getting named after him and a Holocaust survivor from Palo Alto gets recognized at a state ceremony.

PAPER OR PLASTIC?... It's official. Come May, you may see more restaurants switching to paper straws and displaying educational materials about the impact of plastic straws on marine life as Palo Alto marks "Plastic Straw Awareness Month." The movement was launched by Junior Girl Scout Troop 60016, which includes 12 fifth-graders from three local schools and a seventh-grade co-leader, who gave a presentation at Monday's City Council meeting and are now making the rounds at local restaurants, community organizations and events to spread knowledge and paper straws. Mayor Liz Kniss received a handful from the troop on Monday after they detailed their progress to date, which includes a website that allows local restaurants to register for the campaign (in return, they will receive support in the form of educational posters, table tents and information about where they can get paper straws). The troop reported that The Counter on California Avenue has already signed up. Paly senior Michaela Fogarty, who is studying the impacts of plastic straws on the environment, joined the Girl Scouts Monday in making the case against plastic straws. Most people don't think drinking straws are a huge problem, Fogarty said, and this ignorance leads to a huge global problem of plastic contamination. "Every day in the U.S. we use enough plastic straws to wrap around the world two-and-a-half times," Fogarty said. "So, it's a huge problem. And this plastic waste isn't recyclable and it doesn't degrade in the environment, but continues to impact our ecosystems and our own health." It remains to be seen how many restaurants have signed up, but the Girl Scouts scored one victory Monday. After their presentation, the council agreed to pass a proclamation declaring May as the month for straw awareness.

A FAMILY LEGACY ... The family of Silicon Valley technology pioneer Frank Greene Jr. was "pleasantly surprised" to learn that David Starr Jordan Middle School in Palo Alto will be renamed after the late CEO. Education has been a core Greene family value for as long as his brother, Arthur Greene, can remember. "Education is probably the most important, strongest thing you can have that no one can take away from you," said Arthur Greene, who lives in Moorestown, New Jersey, with his wife, Rita. "He loved kids ... He was really into the sciences," Rita said of her brother-in-law. Other Greene family values of ambition and persistence encapsulate Frank Greene Jr.'s legacy. Arthur Greene, who is hopeful that his brother's legacy will inspire students of the newly renamed school, offered them advice inspired by his brother's glass-ceiling-shattering work. "Set high goals and persevere no matter what obstacle is placed in front of you," he said. "Do not let people diminish you ... because of who you are." Arthur Greene hopes to be present for the renaming ceremony later this year. "I wish he (Frank) was around so he could accept the honor," he said. "Once we know the date, I'll work to try to come out."

FINDING REDEMPTION ... Palo Alto resident Judith Rabbie was recognized at the state Assembly's 13th annual Holocaust Remembrance Day Celebration at the invitation of Assemblyman Marc Berman, D-Palo Alto, on Monday, April 16. "Judith's survival during the Holocaust and her long and full life are a testament to her strength and spirit," Berman said in a press release. In 1941, Rabbie was born in Budapest, Hungary and three years later was kept out of sight by a non-Jewish family for 10 months before she was reunited with her mother. Her father died en route to a concentration camp. The mother and daughter stayed in Hungary for 12 years before heading to Switzerland, where Rabbie earned a master's degree in chemistry, a field her mother worked in. She then moved to Israel for doctoral studies and met her husband there. In 1981, the couple relocated to Palo Alto, where she worked as a chemist and was a manager at Syntax for 17 years before retirement. "My revenge is that I'm standing here, and I can tell you my story. Hitler didn't do what he wanted to do. I have two children and beautiful grandchildren, and that's my revenge. I'm here," she said in a statement.

Congratulations to Junior Girl Scout Troop 60016 for being the change they want to see. Plastic straws did not exist when I was a child. They are a serious problem. And thank you to the adults who encouraged them. Way to go young ladies!

Singapore's oldest cafe was about to open in Palo Alto. Then, the coronavirus hit.
By Elena Kadvany | 4 comments | 7,572 views

A Pragmatic Approach to A Trillion Trees
By Sherry Listgarten | 4 comments | 4,374 views

Repairing a Disagreement with your Beloved & “Physical” vs. “Social” Distancing
By Chandrama Anderson | 2 comments | 3,083 views