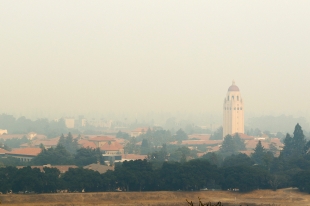 The Bay Area has some of the worst air quality in the nation but numbers have gradually improved over the last few years, the American Lung Association said in a report released Wednesday.

Bakersfield was ranked worst for short-term particle pollution while Fairbanks, Alaska, was worst for the long-term pollution, the report said.

Despite the poor rankings, the lung association said strong state and local clean air programs in California are driving progress.

"We must continue the life-saving work of cutting air pollution and slowing climate change," Holmes-Gen said in a statement.

Too many people driving cars + not enough public transit options = unhealthy pollution. Do we want our children to grow up healthy or not?

SFO bound flights over our city at lower attitudes and at more frequency is NOT helping! SFO is expanding air quality will get worse.

Damn good thing there's someone at the EPA trying to keep air clean!

Is it cars, planes, industry ... or maybe Reagan's claimed pine tree pollution?
By "Bay Area", what is actually meant?

I have noticed in the Baylands when certain types of planes
flyover a heavy fuel-like smell fills the area, and some late
nights walking around the Midtown area planes go over
and same thing ... but people are sleeping and may not
notice it. I've read that the pollution from modern cars is
cut way down, but now that car companies have been found
cheating on emissions, who knows. It would be good to have
a breakdown and pollution sources ranked by percentage.

I am really surprised because, at least visually, air quality is
better in Palo Alto than it was in the 70's and 80's when you
could not see the hills most days from Arastradero, or across
the bay most days from the Baylands.

Report Objectionable Content
Email Town Square Moderator
7 people like this
Posted by Jay
a resident of Charleston Gardens
on Apr 20, 2018 at 11:00 am

Same can be said for jets they are using more "efficient" engines so we should get reduced air pollution but when they fly lower and more often (SFO is processing more flights traffic compared to 10 years ago and is expanding their terminals) over Palo Alto it negates any benefits.

Jet engine pollution I read somewhere was equivalent to 100 or so cars.

Report Objectionable Content
Email Town Square Moderator
12 people like this
Posted by Palo Alto Forsale
a resident of another community
on Apr 20, 2018 at 4:54 pm

The solution is to double and redouble the population, again and again.

Report Objectionable Content
Email Town Square Moderator
12 people like this
Posted by Online Name
a resident of Embarcadero Oaks/Leland
on Apr 20, 2018 at 4:56 pm


And to spend millions of our dollars on road furniture to create more congestion. But that's ok because the CC passed a no-idling law.

Report Objectionable Content
Email Town Square Moderator
15 people like this
Posted by mauricio
a resident of Embarcadero Oaks/Leland
on Apr 20, 2018 at 5:03 pm


But wait a minute, Steve Levy keeps claiming that the Bay area's air quality is fine and getting better. His PAF fellow travelers claim that increasing the population density will improve the air quality.

Report Objectionable Content
Email Town Square Moderator
7 people like this
Posted by Priorities
a resident of Another Palo Alto neighborhood
on Apr 20, 2018 at 6:42 pm

“Do we want our children to grow up healthy or not?”

Bay Area used to have goid air quality, it seems to me the rise of SUVs coincided with the air getting noticeably worse outside. That and poor attention to traffic circulation and too much development.

Report Objectionable Content
Email Town Square Moderator
12 people like this
Posted by CrescentParkAnon.
a resident of Crescent Park
on Apr 21, 2018 at 11:19 pm

> Steve Levy keeps claiming that the Bay area's air quality is fine and getting better. His PAF fellow travelers claim that increasing the population density will improve the air quality.

Well, now you understand why he has to protect his fake-news by censoring, editing and deleting so many comments and being nasty to dissuade people from engaging to begin with on his so-called blog.

Looks like Detroit will go by way of Palo Alto

"The idea of making a transportation, logistics and distributing hub has been tossed around for a while. Now, it's taking off. "

Air Quality problems are a a threat to aerotropolists, expect this to get worse.


Report Objectionable Content
Email Town Square Moderator
2 people like this
Posted by Big Boats
a resident of College Terrace
on Apr 22, 2018 at 7:16 pm

more trains and public transit.
Get the cars off the road.


Report Objectionable Content
Email Town Square Moderator
11 people like this
Posted by Online Name
a resident of Embarcadero Oaks/Leland
on Apr 22, 2018 at 9:06 pm


@Big Boats, we can all probably agree on a "No Oil Tanker" policy for Palo Alto at least until the sea / bay level rises dramatically and this becomes an issue.

In the interim, getting around to conduct our daily lives has become increasingly time-consuming and challenging with companies adding tens of thousands of new commuters for their new office parks for which we have no infrastructure. Would you support the proposed ballot initiative to curb office growth until the infrastructure catches up?

Public transit remains limited and the trains still run only North-South Will the big companies cut back on their local growth plans? Will they invest in the infrastructure to carry their workers?

Can you stay healthy without making more trash?
By Sherry Listgarten | 7 comments | 3,330 views

Think about helping others in our coronavirus-affected area
By Diana Diamond | 7 comments | 3,024 views

The University of California’s flexible policies during COVID-19
By John Raftrey and Lori McCormick | 6 comments | 1,682 views