It's almost tee time in the Baylands 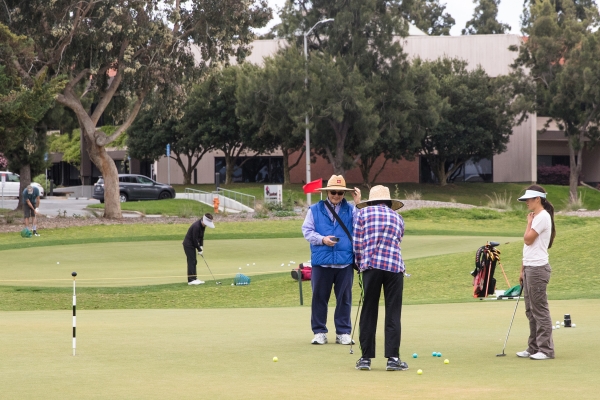 Golfers utilize the new putting greens at the Baylands Golf Links in Palo Alto on April 10, 2018. Photo by Veronica Weber. 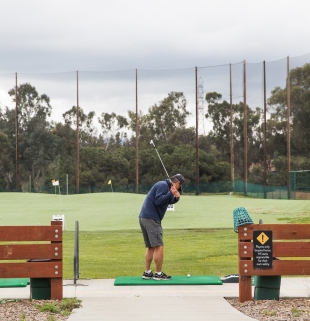 Golfers practice their swings at the driving range at the new Baylands Golf Links in Palo Alto on April 10, 2018. Though the golf course is not yet open, the putting green and driving range are now open. Photo by Veronica Weber.

Did you notice what little detail was left out of the story? If you gotta ask, you can’t afford it I guess. This whole process has been a disaster. Millions over budget and years behind schedule. Each year the course was closed coast them millions in lost greens fees. But hey, it is going to save the froggies. I predict they will kill it with outrageous green fees.

Is there a decent restaurant there?

Is the Baylands Golf Links EVER going to open? It was late April, now it's late May. What's going on here?

Sports Guy is a registered user.


The Grand Opening of the new course is set for May 26. The final day for the Brad Lozares golf shop will be April 17 (driving range and pro shop close at 5 p.m. that day), with new management taking over April 18. What this all means is that, with head pro Brad Lozares retiring, all those familiar faces you used to see at the pro shop and providing instruction, most likely will be gone -- replaced by the new management company. Expect prices to go up. Once again, out with the old and in with the new.

We have been hoping and praying that they would finish this project for years. Now let's get it done. Saying that it's important to hire "an experienced operator to manage the new course" when they already had one in Brad Lozares and company already, puts the course in the hands of a group that doesn't know the clientele in Palo Alto. Anyone golfer who has played Moffett Field knows how badly it is maintained. Let's just hope that the same won't be done to Baylands (they already fired the maintenance team who kept PAGC so well). Many of us are looking forward to the new course. Let's hope they keep some of the personnel who have treated us so well over the years.

Report Objectionable Content
Email Town Square Moderator
4 people like this
Posted by Peter
a resident of Palo Alto Orchards
on Apr 13, 2018 at 1:38 pm

they took out a huge number of trees....zero link between trees and City's Green program = unacceptable

Report Objectionable Content
Email Town Square Moderator
3 people like this
Posted by Gale Johnson
a resident of Adobe-Meadow
on Apr 13, 2018 at 2:00 pm

Gale Johnson is a registered user.


Yes, it's me, the same guy who chimes in on many other issues, and I would say, more important issues, in our city.

I remember the course from it's infancy. I started playing at Paly in 1961, right after we moved here. Pat Mahoney was the pro who managed the shop and the course operation. There was a little lunch counter and a funny guy, wish I could remember his name, flipped burgers and hot dogs.

I wrote a story for my Avenidas 'Life Stories' class about my golfing experiences..."Birdies, Bogies, and Divots". If anyone is interested I will be happy to forward it to you. My email address is ggandglj@yahoo.com. I included Paly in the story.

I will miss the gang I played with and with all of the staff and pros working under Brad in the shop. Good luck Rich and Mark! Brad always called me "Mr. Johnson". That was so nice. The other pros did too for a long time, but eventually Mark just started calling me by my first name...'Gale'. That was nice also. He gave lessons to my wife, Garnet, and our two sons.

I need to expand my story to include memorable experiences/moments at Paly. Sinking a 72 ft uphill breaking putt on 15, a sandy birdie on 3, an eagle on 16, birdieing every hole over the course of playing them for so many years, breaking 80 (needing a par and a birdie on 17 and 18 to do it), and seeing my neighbor and golfing buddy, Bill Overton, get two 'holes in one'.

Why couldn't this have happened 20 years ago? The layout sounds really interesting and exciting. I might be enticed to drag out my clubs and give it a try, but I will use a motorized golf cart. All the times I played at Paly I packed my own bag, over my shoulders, and walked all 18 holes. Can't do that anymore.

Green fees...I used to buy month play cards for $125. I have no idea what the new fees will be. If they are prohibitive of most PA residents purchasing them, then this will be another failure.

I went out to Paly...okay...Baylands Golf Links...to putt on their new practice greens a few months ago. Mark was giving a lesson. We made eye contact and he said "Hi, Gale, haven't seen you in a long time". He was right and that's the cordiality and friendly voices I will miss with the new ownership and management operation at 'Paly'.

Report Objectionable Content
Email Town Square Moderator
2 people like this
Posted by Carl Jones
a resident of Palo Verde
on Apr 13, 2018 at 2:37 pm

Carl Jones is a registered user.


I don't play golf. But I wonder if, perhaps a day or two before the official opening, there could be an opportunity for 'pedestrians' to walk the course? Not unlike walking the CA 85 extension before it opened, or a bridge (as was the Golden Gate, once). I have accompanied friends when they were playing golf (in Colorado) and appreciated the beauty of a well designed course. I would genuinely appreciate the opportunity to see what ours is like. Could something like that be arranged?

To Gale Johnson -- I think you want to remember Jimmy Saita, the owner of the little café - he used to give me bowls of chili because I wasn't big enough to give the ball a long whack! And Bob Volker, the golf pro?? I miss those times in the '70s!

Gale Johnson is a registered user.


@Barbara
Bingo, and thank you for your good memory! Jim Saita is the guy, and how could I forget his trademark recipe...chili with chopped onions and shredded cheese on top! I'm getting heartburn just thinking about it.

Report Objectionable Content
Email Town Square Moderator
7 people like this
Posted by Sally
a resident of Downtown North
on Apr 14, 2018 at 6:47 am

To Barbara's point above -- The city is indeed costing taxpayers an additional small fortune in lost revenue (beyond project costs) by not having the course up and running by now, missing their stated targets for no discernible reason.

This fact is embarrassing, and obtains independently of whatever positive or negative feelings one may have about other aspects of the project.

Report Objectionable Content
Email Town Square Moderator
3 people like this
Posted by Sam
a resident of Menlo Park
on Apr 15, 2018 at 2:24 pm

I actually think the management at moffet is doing a fine job. The course continues to improve and the feedback from others tends to be the same. Yes the have the backing off Google but they will have the backing of the city of Palo Alto and a brand spanking new course.
I'm excited for the new course and look forward to lots of playing there.

The new Baylands golf course needs to have a nice discount for the resident rate on their green fees.

I have a question. I wonder if is permitted to bike there in the paths for us non-golfers after the project opens. I did bike there a couple of weeks ago. The landscape is very nice and the gulf course is very expansive.

Report Objectionable Content
Email Town Square Moderator
1 person likes this
Posted by JR Fent
a resident of Midtown
on Apr 16, 2018 at 5:32 am

So looking forward to this course opening! It would be interesting if people could walk the course soon. I'm curious as to the layout of the fairways now - has there been any changes since it's early days. We Web Link did a tree removal job on a course recently. The word back was that the removal improved & speeded up play. I think that always has to be considered when a course is in a place that assures that it will be busy.

Can we just get a decent hot dog please,


Report Objectionable Content
Email Town Square Moderator
2 people like this
Posted by Jc
a resident of Crescent Park
on May 26, 2018 at 6:55 pm

The delays show show you what happens when political appointees get appointed to boards dealing with issues they know nothing about. Some members started asking questions that had been asked and answered years ago. Others could not grasp that there was already a course which was being downsized with regard to grass planting and water use. It w as a total nightmare dealing with some of these clueless people and their lack of sophistication cost us a lot of time - two years and money. There should be a test for people being appointed that will determine that they have some knowledge about the issues
That they will be adjudicating....

Flying: How to lower your impact
By Sherry Listgarten | 19 comments | 3,288 views

Be the first to know.
Get local daily headlines sent straight to your inbox.
Sign up