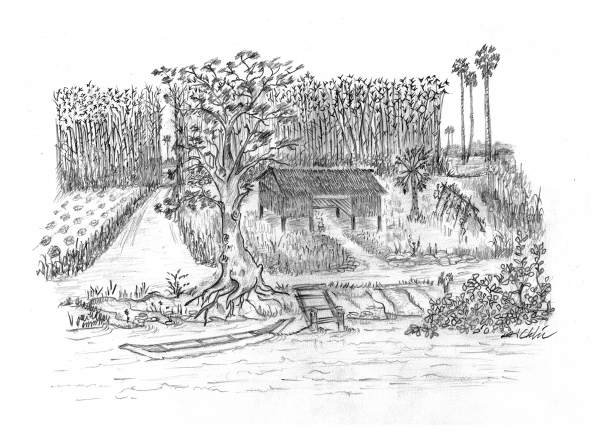 After the Khmer Rouge took over Cambodia, Channy Chhi Laux and her family lived together in this French village hut for six months before being separated. Sketch by Ken Chhi, courtesy of Channy Chhi Laux. 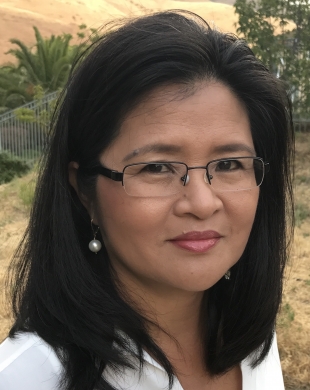 Channy Chhi Laux, a survivor of the Cambodian Genocide during the Khmer Rouge regime, has worked in Silicon Valley as an engineer for 30 years. Photo courtesy Channy Chhi Laux.

Channy Chhi Laux was just 13 years old when she woke up to the sound of gunfire from the Khmer Rouge Communist regime that invaded her family's hometown in 1975 and went on to kill an estimated 2 million Cambodians during a four-year reign that ended in 1979.

She and her family had braced themselves for that moment but nothing prepared her for the next four years of sickness, constant separation from her family and the fear of — and sometimes longing for — death in the harsh living conditions of the labor camps, where she was forced to work.

During those years, Laux vowed that she would one day tell her story for her progeny and to ensure that others knew not only of what took place in Cambodia, but of the strength of her mother, Em, whose love motivated her to stay alive.

"While I was struggling through labor, the starvation and the sickness, I just couldn't imagine I was gonna make it," she said. "My best hope was to be with my mom before I die. That's the least you can do for your mom."

Laux, who now lives in the Bay Area, spent more than 30 years writing her newly published memoir "Short Hair Detention: Memoir of a thirteen-year-old Girl Surviving the Cambodian Genocide," and is scheduled to talk about her experience during several book-signing events throughout the Bay Area, including a pending appearance at the Palo Alto Library.

Laux's book tells a harrowing story of survival. Without warning, the Khmer Rouge removed her from her family and forced her to labor in rice fields with little food and next to no hope for a stable, free way of life with her parents and four siblings.

In her book, Laux describes eating small crabs raw to stave off hunger. At one point, she was plagued by malaria and had no modern medicine with which to treat it. Most gut-wrenching, perhaps, is the description of sexual assault she endured.

Amid the day-to-day drudgery of forced labor, and uncertainty of when her family might be reunited, Laux's struggle with God — who she regularly blames for injustice and thanks for her blessings — permeates throughout the book.

Her direct writing style, which details her hardships with little to no embellishment, has the effect of making her experiences that much more disarming to the reader.

Ultimately, Laux managed to escape with her mother and sister, Chenda, to Thailand, where the United Nations International Emergency Children's Fund (UNICEF), an international humanitarian program, helped them reunite with relatives and resettle in Lincoln, Nebraska in 1979.

She worked in Silicon Valley as an engineer for 30 years, and after her mother's death in 2010, founded Apsara Foods, a company that sells Cambodian food products to retailers, restaurants and other food service businesses. The company was born out of a passion for cooking that her mother instilled in her.

For many years, Laux scribbled notes — sometimes only one word long — and for many other years did not write anything at all. It wasn't until she was laid off from an engineering job in 2016 that she finally had the time to commit to finishing her book.

During a reading at Books Inc. in Palo Alto on March 7, Laux explained that the process of writing the book served as a form of therapy for her and is still helping her heal.

She said during her interment, the terrible things she experienced motivated her to tell her story but the act of writing and reading her own words made her also remember the kind things that happened along the way.

For instance, complete strangers sometimes treated her as their own child and two Khmer Rouge nurses took a liking to her, feeding her steamed rice and salted fish.

In addition to teaching her daughter and son (both in their early 20s) about her experiences and to be strong in the face of hardship, Laux hopes that the memoir encourages readers to respect one another's differences.

She wants others to understand her daily struggles during her internment so that they are inspired to get involved in making the world a "better place for themselves and for their children."

Laux has not returned to Cambodia since escaping the Khmer Rouge but her daughter has said she wants to visit with no one else but her.

Laux plans to appear at the Palo Alto Library in coming weeks. (A date and time had not yet been confirmed.) For more information, go to library.cityofpaloalto.org.

The first few seconds after awakening; before I remember the virus
By Chandrama Anderson | 0 comments | 3,053 views

Can you stay healthy without making more trash?
By Sherry Listgarten | 4 comments | 2,441 views

Think about helping others in our coronavirus-affected area
By Diana Diamond | 5 comments | 2,269 views