Barbara Harris to resign, Tom Jacoubowsky goes back to teaching 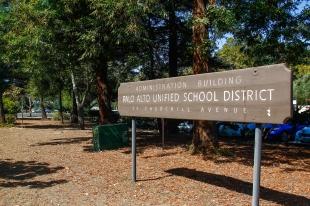 In the past two weeks, Palo Alto Unified School District administrators have announced they will not return to their positions. Photo by Veronica Weber.

Harris plans to resign this June, she announced in an email to administrators on Friday, and Jacoubowsky will return to a teaching position at one of the secondary schools. He notified staff and parents late last month.

Harris said she decided over the winter break "that it was a perfect transition after five years of service in Palo Alto to think about doing something different." She cited a recent illness also as "an indicator that it was time to make a change."

"The elementary team and I have accomplished a high standard of excellence," Harris wrote. "I leave my position with great pride in my work and with a sense of fulfillment and accomplishment."

Harris said she has an appointment with the California State Teachers' Retirement System (CalSTRS) in a few weeks but is unsure if she will retire.

Harris started in Palo Alto as an assistant principal at JLS Middle School in 2013. A longtime California teacher, she also was the founding principal for two charter schools, one in Los Angeles and the other in Memphis, Tennessee, according to the district. She had also previously worked as the manager of elementary curriculum and instruction in the San Jose Unified School District.

Harris was promoted to director of elementary education in 2014. The next year, former superintendent Max McGee moved her and several other district administrators to higher-level director positions; Harris was named chief academic officer for the elementary schools.

Harris oversaw several key changes at the elementary level in recent years, including the move to full-day kindergarten and the adoption of a new mathematics curriculum.

Jacoubowsky plans to return to the classroom after several years of different administrative positions. A former longtime Gunn High School administrator, Jacoubowsky became the interim principal of Jordan Middle School in 2015 and then moved to Juana Briones the following year.

"While I have enjoyed my time as an administrator and the many different roles I have done, I am returning to my first love as an educator," he wrote in a Feb. 24 announcement.

He told the Weekly that he has been thinking about making this change for "the past couple of years."

During Jacoubowsky's 14 years at Gunn, he was a teacher, athletic director, dean of students and assistant principal.

He said he does not yet know which school he'll teach at next year.

The district plans to "immediately" start looking for new principals, with the goal of having permanent hires in place by July 1, 2018, interim Superintendent Karen Hendricks said.

18 people like this
Posted by Hawaiian Bob
a resident of Another Palo Alto neighborhood
on Mar 9, 2018 at 4:22 pm

A position that doesn’t need to exist, let’s be smart and not fill it.

@Hawaiian Bob, why is that? Could you please elaborate?

2 people like this
Posted by Resident
a resident of Another Palo Alto neighborhood
on Mar 9, 2018 at 6:51 pm

It seems to me that PAUSD cannot keep its senior administrators. From Churchill to secondary schools every time at this year we hear of many leaving for all sorts of reasons, but I ask if it really is just a set of excuses since it happens so often.

How does PAUSD lack of retention compare with other Districts in the area?

Report Objectionable Content
Email Town Square Moderator
5 people like this
Posted by 4good
a resident of Stanford
on Mar 9, 2018 at 7:03 pm

4good is a registered user.


Another big loss of a talented, caring and experienced PAUSD administrator. When will the bleeding stop?

Singapore's oldest cafe was about to open in Palo Alto. Then, the coronavirus hit.
By Elena Kadvany | 2 comments | 5,739 views

A Pragmatic Approach to A Trillion Trees
By Sherry Listgarten | 4 comments | 4,200 views

Repairing a Disagreement with your Beloved & “Physical” vs. “Social” Distancing
By Chandrama Anderson | 2 comments | 2,890 views

The University of California’s flexible policies during COVID-19
By John Raftrey and Lori McCormick | 6 comments | 2,752 views