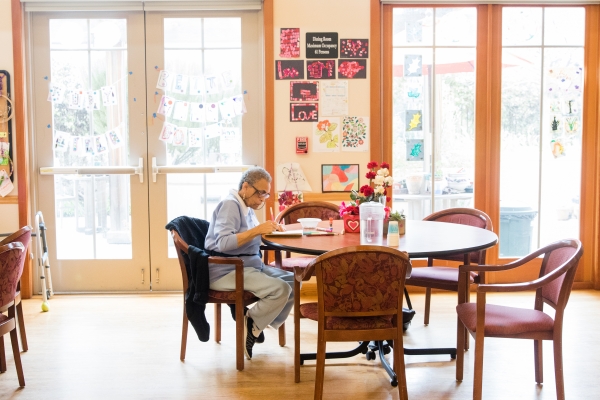 Ginger Camp sits at a sunny table as she works on a coloring project during an art-making activity at the Avenidas Rose Kleiner Center in Mountain View on Feb. 28, 2018. Photo by Veronica Weber. 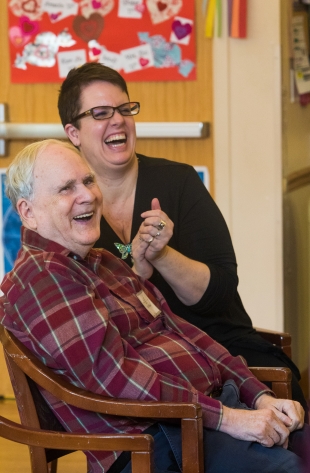 Loretta Austin, activities director at the Avenidas Rose Kleiner Center in Mountain View, laughs with participant Art Pollard as the two try to guess the answer to a riddle during the brain exercise segment of the adult day care program on Feb. 28, 2018. Photo by Veronica Weber.

With all due respect to the issue... geez, in't that headline just trolling for punchlines?!?

@dos quads - you make it sound like dementia is a dirty word and people with that disease should be ashamed. I am sure that a large part of this project is bringing the issues out into the open so people with the disease and their families are not afraid to talk about it.

14 people like this
Posted by suggestion
a resident of Another Palo Alto neighborhood
on Mar 2, 2018 at 10:42 pm

Stop building stack and pack housing that only people with zero physical limitations can live in.

Make walkability mean you can walk safely and enjoyably (as opposed to whatever costs the most and makes driving unsafe and frustrating).

Report Objectionable Content
Email Town Square Moderator
3 people like this
Posted by Joe
a resident of Another Palo Alto neighborhood
on Mar 4, 2018 at 1:08 pm

Dementia is not a "disease"--but an aging-related physical condition.

Dementia cannot be contracted from another person like the flu, or tuberculosis.

Report Objectionable Content
Email Town Square Moderator
15 people like this
Posted by Getting Grey
a resident of Charleston Gardens
on Mar 5, 2018 at 1:12 pm

As a long time resident of this fascinating city, I have had the unpleasant experience of spending a few years in a wheelchair trying to manouver around town. That was an eye opener on a personal level. For a city which prides itself in being green and at least a bronze medal in “city in which the most people bicycle to work”, our infrastructure for people with disabilities is abysmal.

I am now fully mobile and have been trying my best to help my gracefully aged father around town in his wheelchair. It fully understand the burden placed on the caregiver when people start to suffer dementia.

The distasteful reality is that most of us will suffer some degree of dementia in our lifetimes. Whether it js MCI, full blown Alzheimer’s, anything in the range of “age related Dementia”, or another sad and life draining disorder. Not addressing this issue in the community now is like not planning for your retirement. Given the level of stress some of us experience in our daily lives, it can often appear that we are already suffering. I hope that this event is broadcast and all the people in this city who can watch it do. If I had seen a discussion broadcast to my high school or earlier in my education, I think it would have helped me see the world from a more compassionate level.

Not focusing purely on “what the city did wrong” is a good start and I hope my introduction did not convey the idea that this is something which can be solved through governmental action alone.

Our neighbors, relatives, friends, coworkers, and all the people we see around town are the community which we need to cherish and assist. Everybody has had a bad day, blamed someone else, perhaps had a serious dispute with someone in the community. As we age, many of those negative emotions or experiences seem childlike and immature. So today, I hope that I and everybody can approach members of the community in realization that there are often problems which we do not know about that influence the behavior of others. Giving people a pass without letting the world walk all over you is possible with a little effort. At the end of the day I would rather forgive and be forgiven than go to bed angry.

The reason I am bringing this to a personal level within the community and not simply addressing the interactions of health care professionals, their clients, and the support system provided by individual fees or a tax base; those directly impacted at all points, is because the best thing that can be done to help people with any cognitive or emotional issues is to simply be a nice person.

When someone takes up space on the sidewalk with a wheelchair, smile and hope that people would move over for you. When you drop your keys or wallet and someone in the community tracks you down, shouts if nearby, or anonymously returns the item be grateful for all the people who surround you. Whether those you know on a first name basis or those who are practically invisible, recognizing that we are a community above the level of a simple social contract for mutual protection is the first step towards improving your life and the outlook of all around you.

I applaud anyone brave enough to talk to strangers about their cognitive impairment while using the word dementia. What comes around goes around. Wouldn’t you rather it be a smile than the adult for of bullying and ostracizing which we all see to often.

Thanks for taking the time to read this. I hope you have a wonderful day and that others are better for having interacted with you in this community of ours.

...and when someone burns down your mom's house and dad's caregiver's contractor tells mom that she absolutely needs to rebuild the house by him and no one else, please, please, Sergeant Nic, please community, building department, step up and investigate. Please California State Licensing Board, please investigate. Report financial fraud. Please Palo Alto Online, San Jose Mercury, do a story on elder financial fraud.