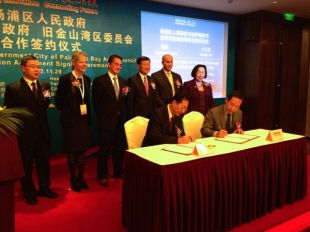 In this 2012 photo, then-Palo Alto Mayor Yiaway Yeh, right, is joined by the Mayor of Yangpu (at table) along with top officials from the Yangpu District and the Bay Area Council as he signs an agreement to explore economic opportunities between Palo Alto and Yangpu. In 2018, the Palo Alto City Council approved adding Yangpu District of Shanghai as a sister city. Photo courtesy of the city of Palo Alto.

Palo Alto has a few things in common with its newest sister city: a top college, dozens of tech companies, a University Avenue and plenty of Chinese New Year celebrations at this time of the year.

The City Council on Monday approved a resolution formalizing Palo Alto's relationship with the Yangpu District, one of 16 municipal districts in Shanghai. The partnership, spearheaded by Neighbors Abroad, makes Yangpu the eighth sister city in Palo Alto’s global family and the second to be added in the past year.

The city's relationship with Yangpu began in 2012, when the two municipalities signed a "Smart City" agreement focused on business relationships. In December 2012, then-Mayor Yiaway Yeh joined City Manager James Keene and former council members Nancy Shepherd and Marc Berman cemented the partnership with a visit to Yangpu. Facilitated by the Bay Area Council, the relationship further evolved in the summer of 2013, when a group of Palo Alto students visited Shanghai as part of an exchange program.

The letter called the Yangpu District "an innovation and education hub for Shanghai as well as for China, a university town similar to Palo Alto with strong intellectual/student populations and filled with the spirit of entrepreneurship."

Last year, Neighbors Abroad hosted a community meeting with members of the city’s Chinese Community. According to the organization’s background document on the new partnership, more than 40 people attended and showed "unanimous support" for developing a sister city relationship with Yangpu District.

The original introduction was made by Ms Bing Wei in 2012 when she was working at the Bay Area Council, and currently she serves as one of Neighbors Abroad's vice presidents for the Yangpu relationship. The relationship further evolved in the summer of 2013, when a group of Palo Alto students visited Shanghai as part of an exchange program.

Located in northeast Shanghai, Yangpu boasts a population of 1.3 million residents. According to Neighbors Abroad, it has more than 30,000 companies and 14 universities, including Fudan University and Tongji University.

Michael Zhu, vice president of Neighbors Abroad, told the council that Yangpu District has much in common with Palo Alto, including a bustling sports scene, a University Avenue and world-class cultural offerings, including an international music festival. These common features, as well as Yangpu’s leadership in entrepreneurship and innovation, create great opportunities for collaboration between the two municipalities.

"I hope we can work together and set a great example of what a new sister relationship will look like," Zhu said.

With Yangpu being our sister city with so many similarities to Palo Alto, perhaps something can be done to help Palo Altans buy homes in Yangpu, to help with our serious housing shortage.

I would also like to set up my corporation in Yanpu too.
Similar to Tencent (across the street from City Hall).

I would like my children to attend state owned Chinese schools too, but learn everything in English, similar to the Hanban Mandarin Immersion programs throughout our nation.

We are now sister cities after all.

Why is the paper quoting numbers 8 years out of date? Doesn't the paper know what the numbers are based on school enrollment profiles for 2017-2018?

Also, from the article photo legend: "In this 2012 photo, then-Palo Alto Mayor Yiaway Yeh, right, is joined by the Mayor of Yangpu (at table) along with top officials from the Yangpu District and the Bay Area Council as he signs an agreement to explore economic opportunities between Palo Alto and Yangpu. In 2018, the Palo Alto City Council approved adding Yangpu District of Shanghai as a sister city."

Can someone tell me if any Palo Alto resident has gained an "economic opportunity" in Yangpu in the last 6 year?

Report Objectionable Content
Email Town Square Moderator
19 people like this
Posted by Resident
a resident of South of Midtown
on Feb 28, 2018 at 9:59 pm

We haven't gained any economic opportunities.
The Chinese are here to gain knowledge and ideas on ways to exploit things from us for their gain
The only thing we may have gained are real estate speculators
This is happening nationwide now.

Report Objectionable Content
Email Town Square Moderator
1 person likes this
Posted by m2grs
a resident of Midtown
on Mar 1, 2018 at 10:55 am

@Long Time Resident, housing prices in Yangpu is higher, in US dollars, per square foot, than Palo Alto.

You can send your kids to the very best universities in China, such as Tsinghua, Fudan, without taking the extremely competitive entrance exam that tens of millions of Chinese kids have to take, as long as the student has an acceptable level of GPA and Chinese language skills. This is a special state-run program to attract foreign students. And the tuition is minimal, far less than UC.

Report Objectionable Content
Email Town Square Moderator
4 people like this
Posted by Bob Wenzlau
a resident of Crescent Park
on Mar 1, 2018 at 11:09 am

As some of the sentiments show, the role for sister cities is always relevant. Started after WW2, there were gulfs in understanding between german and french communities - and as governments can rally against each other, the wisdom was to build local friendships. Sister cities grew from Europe to prevent conflict.

There are tensions with China. The US and China are both strong economic powers with China on the verge of tipping the US from the top economy. I read Destined for War: Can America and China Escape Thucydides’s Trap? by Graham Allison as he showed the vulnerability countries have when they are both large and changing. It reinforced the need for engagement and exchange - something that I see our sister city relationship supporting. I left the book believing the sister city action was prudent. (As an aside, it was a very readable book and a great introduction - not as bleak as the title suggests.)

At Neighbors Abroad we have been working actively with a program called BEAM - Business Entrepreneurship and Math - a program at Gunn and hopefully Paly that builds student teams in each of our sister cities to work on either business or government challenges. That we have many Palo Alto business colocated near Yangpu, such as Tesla or VMWare and equally have Chinese firms such as Tencent, located in Palo Alto, provides the bridge that the students can grown on. It will not be easy going to get this setup in Yangpu as the curriculum is protected (not unlike Palo Alto's), but we will work to make exchanges that work with business. I believe that business is a key ingredient of our culture.

I am grateful to our Chinese community for coming together around this selection. There are many many great cities in China, each could be a sister city. Broadly I view Yangpu District as our lilly pad, our starting point, for Neighbors Abroad. I hope you join us Monday morning at 8:30 AM for a signing ceremony at City Hall - Gunn student Lily Liu will play her Chinese harp - if you want to be blown away, listen to her YouTube below - again, I am amazed with what our community is composed of.

Neighbors Abroad wants to grow our membership. We are working to build structured engagement in culture, education, commerce and sustainability through this network of 8 sister cities. Think of BEAM, it was amazing to watch our student on web conferencing working on common projects and as such becoming tuned to global collaboration that is part of our future.

We are running a bit lean, so if any community members wish to join Neighbors Abroad, let us know. If any plan to travel to one of our sister cities, let us open doors for you. If a student wishes an exchange, please write us. You can reach me at bwenzlau@neighborsabroad.org.

Ok, I went a bit long. Enjoy the rain!

The takeover of the housing market by Asian buyers has forced ordinary home buyers out of the market. This has been going on for years.

The demographics of Palo Alto have changed dramatically. Corporate and business and real estate interests are pleased.
Ordinary residents are not.
Evictions all around. And ghost houses. What's to like?

These local restaurants are donating meals to Bay Area residents in need. Here's how to help.
By Elena Kadvany | 6 comments | 11,415 views

Coronavirus: Plan ahead now for a big outbreak
By Diana Diamond | 20 comments | 4,340 views

Will the Coronavirus Save Lives?
By Sherry Listgarten | 29 comments | 4,027 views

The first few seconds after awakening; before I remember the virus
By Chandrama Anderson | 0 comments | 1,185 views