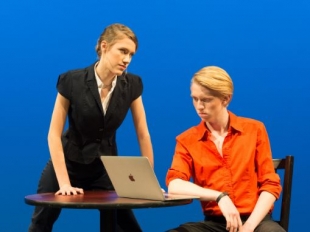 Paly students Sofia Peterson and Robert Vetter perform in the cast of "Venture," a new musical. Photo by Rob Wilen.

This is going to be a great show! Invite your friends and see what the Paly Theatre community has been working on.

Flying: How to lower your impact
By Sherry Listgarten | 10 comments | 2,299 views