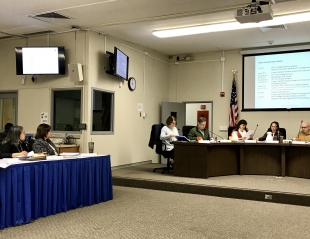 She had 25 years experience? I assumed, after the two major screw-ups, that she was a rather junior employee with little experience, and poor follow-up.

If this is what we expect from experienced employees, the district has sunk considerably lower than I had imagined.

Oh how easy it is to be critical of someone or something we know nothing about.
Shame on you.

You could watch Ms. Mak report for years by watching Palo Alto school board meetings in person or on tv. The public should be mire engaged. I was displeased with the “two major errors” she made (noted in the article and widely known). I hope she isn’t planning to consult for this disctrict and double-dip her benefits. Accuracy is THE most important aspect of the position she has held! She wasn’t on tne ball with these important topics.

Report Objectionable Content
Email Town Square Moderator
18 people like this
Posted by Stew Pid
a resident of Community Center
on Feb 28, 2018 at 1:15 pm

Also, how easy it is to excuse gross incompetence by saying let's not be critical about someone or something we know "nothing" about.

Well, we do know a couple of things. And in this case, those are enough.

I am sure the 2 employees, PALY principal and Ms Mak going out on sick leave or retiring have nothing to do with the upcoming March 15, 2018 deadline for layoffs. They must think we are all fools. What else on they hiding?

Report Objectionable Content
Email Town Square Moderator
16 people like this
Posted by Former Employee
a resident of another community
on Feb 28, 2018 at 10:23 pm

So I do know something about this and while Cathy Mak is not a shining star, she is getting blamed for things that in one case I am 100% she didn't do OR in the other case was not her job.

1. The property tax projection. This is not the first time that the District has missed the County's notifications that Stanford property that is not taxable was in the growth estimate and should be backed out on Ms. Mak's watch. Now, a good question would be if the County knows that, why is it there. But, ignoring that... Yes, she got the growth estimate wrong. But never in all my years at PAUSD did I see Cathy Mak submit a budget with any growth estimate above the 2% inflation allowance. So, sure she got the roll wrong but someone twisted her arm pretty hard to get her to submit a budget that relied on more than 2%. That fact that the growth isn't known is why the District doesn't even open negotiations until the roll is finalized in August and staff receive raises retroactively, sometimes for the entire year. So, she didn't do this voluntarily. Someone - likely someone named MAX - wanted a win and forced her to use the rosy projections above her strong objections. But you have to understand that she's exceedingly conflict averse and will do what she's told when she's told to do it. I lay this malfeasance at Max's feet, not Cathy's.

2. Notifying the unions of the intent to reopen the contract wasn't her job. It was Scott Bowers' job. I can't understand why she's being blamed for this. I have my own opinions as to why Scott didn't do that before he left, but regardless of the reasin, this is his fault not hers.

Lets be clear, I'm not a Cathy Mak fan. She was only promoted because they couldn't hire after multiple efforts. So they promoted her and Bob Golton trained her which was fine with both of them. She's not creative. She's not visionary. But she's a competent accountant and she didn't own either of these failures. The really offensive thing is that the people who did own them were happy to let her take the fall.

Report Objectionable Content
Email Town Square Moderator
17 people like this
Posted by Another insider
a resident of Adobe-Meadow
on Feb 28, 2018 at 10:58 pm

Amen to that. McGee conceived the 3 year contract and the board went blindly along. Mak was pushed out of her comfort zone and experience with the forecast (never above 2% forecast one year in advance is right). Bowers just didn't do his job, but it was McGee's job to supervise him, not Mak. Mak is collateral damage to McGee's reign of error.

Report Objectionable Content
Email Town Square Moderator
12 people like this
Posted by And now Goddard
a resident of Another Palo Alto neighborhood
on Mar 1, 2018 at 6:12 am

It was Cathy Mak's fault, and it was Scott Bowers' fault, and especially Glenn McGee's fault. It's called leadership, and if you are any sort of a leader, you take responsibility, but the culture in PAUSD among teachers and administrators alike is focused on getting paid one of the best salaries around in public education. It certainly wasn't about preventing suiicde. It was preserving your career. Kevin Skelly working there seven years is enough proof of that. Same thing could be seen with the board during the recent years in which they were happy and unanimous to spend $50,000 on fighting the OCR instead of fighting suicide with everything available resource. Let's get another thing out of the way before we get to a warning about returning to old ways. Principals do indeed go on medical leave to fight reassignment, release, or something else unfavorable from above. And district administrators do retire if their contract might not be renewed. I think most know that. But it looks like another administrator is be No groomed to be the next Scott Bowers,mane that would be a giant step backwards to the last 10'years of sex scandals, dating back to the middle school coach who carried on a sick relationship with a student when it sure looked like other staff knew about his perversion. I hope in 2018 it doesn't get worse, but Eric Goddard is back after working as the Scott Bowers in a neighboring district. Goddard, like Bowers, was the principal at the always-complaining Fairmeadow a School, and was brought back in a weird, secretive process to be Barron Park's principal. It is highly unusual that a high-level district administrator drops down to a school level spot, it can only mean that he was promised a higher spot later, but none of that has been discussed in public. Seems like a plan within a plan, which has been the PAUSD culture. Do not send Goddard to a high level position, he cannot move this district forward, he is a return to the Skelly-Charles Young-Bowers culture.

Report Objectionable Content
Email Town Square Moderator
9 people like this
Posted by Anonymous
a resident of Another Palo Alto neighborhood
on Mar 1, 2018 at 8:41 am

It amazes me that she wasn't fired after the first screw-up. And then she survived another one?

Report Objectionable Content
Email Town Square Moderator
4 people like this
Posted by Let a BC Math Lane Student Take the Job
a resident of Palo Alto High School
on Mar 2, 2018 at 11:13 pm

Just let some BC math lane student take the position of Chief Business Official, part-time. It would be good for college applications. Oh, wait, a BC math lane student would be overqualified, maybe check with the regular lane students: ". . .two major budget errors — a misestimate of property tax revenue in 2016 that created a multimillion dollar shortfall with which the board is still grappling."

As far as the above posting on Goddard, he keeps the seat warm. He was the Palo Verde principal back in 2005, I recall. He did nothing about brutal school bullying and prefers to look away rather than solve problems. A Paly alum, he has not helped the school district he attended.

Portland's Thai food darling Pok Pok will be popping up on the Peninsula this spring
By Elena Kadvany | 2 comments | 3,636 views

Flying: How to lower your impact
By Sherry Listgarten | 18 comments | 2,949 views