Kim Diorio expects to return to work in spring 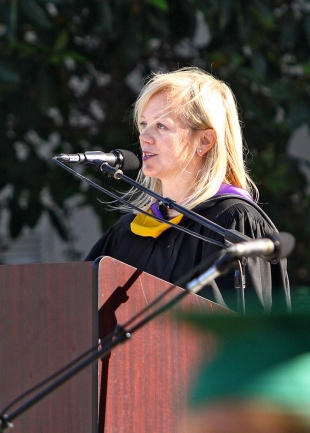 Palo Alto High School Principal Kim Diorio is taking a medical leave effective immediately, she announced in a message to staff on Friday.

"As many of you are aware, the past few months I've been hit hard with health problems," Diorio wrote. "Effective immediately, I will be taking a medical leave and expect to return to work later this spring."

Interim Superintendent Karen Hendricks told the Weekly Tuesday that the district has met with the Paly administration to discuss providing additional administrative support and is looking for a "retired, veteran" administrator to serve as interim principal.

In a message to Paly parents late Tuesday morning, Hendricks said that Diorio notified the district of her leave on Friday afternoon.

"In striving to get this information to you, it was also important that we knew the timeline and had initial steps in preparation for additional leadership support to the site," Hendricks wrote.

Diorio has been Paly's principal since 2013, when she replaced Phil Winston following his resignation. She had previously worked as an assistant principal and counselor.

Diorio has faced criticism over the last year for her administration's handling of student sexual assault cases, even as Paly remained under federal investigation for many years for Title IX violations. She did not link her health issues to that pressure in her message.

When will the other shoe drop is a registered user.


If this a way to quietly have Diorio go away, then the district has no real intent on providing transparency for anything.

Winston left because of documented complaints about his inappropriate behavior toward female staff & students. Maybe someone inferred (mental) health from that, but the reason was not medical.

Report Objectionable Content
Email Town Square Moderator
38 people like this
Posted by Paly Mom
a resident of Palo Alto High School
on Feb 27, 2018 at 10:39 am

[Portion removed.] I had such high hopes that she would address student stress, change the bell schedule to allow more sleep, limit the APs, enforce the homework limits and limit the AP workload. She did nothing to help our student stress. As a mom, an experienced admin, and a former counselor, she should have been more productive.

We need some maverick who listens to the voices of the students and doesn't yield to office politics. Diorio was only concerned with appeasing the teachers. She completely ignored emails, not even an acknowledgement.

[Portion removed.] We need leaders who are intelligent enough to see the big picture. A female Paly principal was a disciplinarian (2008) and she was driven out.

What's wrong with PAUSD Human Resources? Look through the personalities and look at their records, not simply their interview skills and Ivy League degrees! [Portion removed.]

Report Objectionable Content
Email Town Square Moderator
8 people like this
Posted by Seen this movie before
a resident of Jordan Middle School
on Feb 27, 2018 at 11:26 am

Report Objectionable Content
Email Town Square Moderator
16 people like this
Posted by history repeating...
a resident of Barron Park
on Feb 27, 2018 at 12:03 pm

Phil's message was eerily similar. Certainly ironic given the source of those documented complaints:

I am writing this letter to let you know that I have resigned from the position of Principal at Palo Alto High School, and have requested to be reassigned to a classroom position within PAUSD.

As many of you are aware, I recently had a life-threatening medical illness. Something of this nature would cause anyone to reflect on what is important to them, and this event caused me to seriously reevaluate my priorities, health, and personal and professional goals. At this stage in my life, spending time with my family, protecting my physical health and having a better work life balance are my top priorities.

I am confident the school will continue to excel because of the staff, students, the community support, and the administrative team. I am committed to working with the District to ensure minimal disruption and will assist the new Paly principal in any way that I can to make the transition as seamless as possible. I have very much enjoyed my time as an administrator in PAUSD for the last 7 years, and will always value these years professionally and personally.

I appreciate your support and understanding of this decision. Please know that this decision was not made lightly and was the product of a careful and thorough thought process over the past many months. I look forward to continuing to work together in my new role to ensure all students succeed.

Report Objectionable Content
Email Town Square Moderator
16 people like this
Posted by Chip
a resident of Professorville
on Feb 27, 2018 at 12:12 pm

There was great relief among the office staff @ Phil's departure. [Portion removed.]
No one heard about a life threatening illness & he ended up very quickly teaching at another school, with younger kids & minimal contact with office personnel.

Report Objectionable Content
Email Town Square Moderator
4 people like this
Posted by Object that
a resident of Jordan Middle School
on Feb 27, 2018 at 12:23 pm


Report Objectionable Content
Email Town Square Moderator
108 people like this
Posted by Paly Mom
a resident of Midtown
on Feb 27, 2018 at 12:49 pm

Can't we set aside our differences and wish Ms. Diorio well?

Ms. Diorio, I wish you well and hope that you have a quick recovery.

Report Objectionable Content
Email Town Square Moderator
6 people like this
Posted by Transparency?
a resident of Duveneck/St. Francis
on Feb 27, 2018 at 5:19 pm

Transparency? is a registered user.


Report Objectionable Content
Email Town Square Moderator
17 people like this
Posted by Someone turned on the ceiling fan
a resident of Midtown
on Feb 27, 2018 at 7:42 pm

Someone turned on the ceiling fan is a registered user.


"Effective immediately" indicates there is something coming up that we as a community should prepare for.

Deep Throat is a registered user.

Report Objectionable Content
Email Town Square Moderator
3 people like this
Posted by Samuel L.
a resident of Duveneck/St. Francis
on Feb 28, 2018 at 5:27 pm

A Pragmatic Approach to A Trillion Trees
By Sherry Listgarten | 1 comment | 3,060 views

Repairing a Disagreement with your Beloved & “Physical” vs. “Social” Distancing
By Chandrama Anderson | 1 comment | 1,789 views