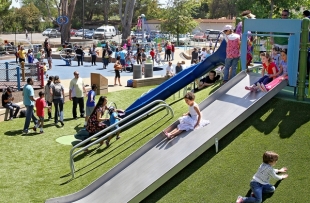 Children rush down the many slides at the Magical Bridge playground at Mitchell Park during a grand opening celebration on April 18, 2015. Santa Clara County approved funds to build more of the all-inclusive play structures, including one at Addison Elementary School. Photo by Veronica Weber.