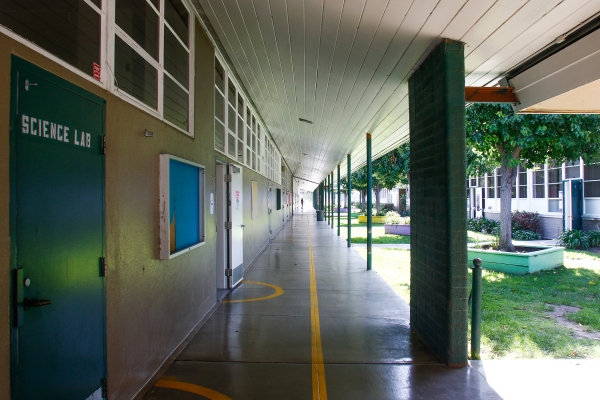 On the left, classrooms at Cesar Chavez Elementary School in East Palo Alto. On the right, the new Ravenswood Middle School. Photo by Veronica Weber. 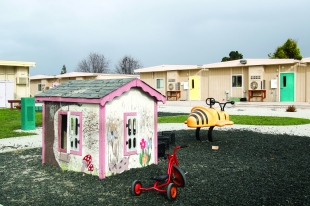 Play structures and tricycles fill the playground for preschool-aged children at the Ravenswood Child Development Center, which the district says is under-enrolled and will review for budget cuts. Photo by Veronica Weber.

21 people like this
Posted by Replace Superintendent and Bussines Chief
a resident of East Palo Alto
on Jan 26, 2018 at 8:01 am

This is not a brainer if the district wants to survive they need to get rid of the superintendent and the chief business administrators. It seems like they both had a clear picture of what was going on, but never let the public know until it was time to negotiate with the unions. Something sounds fishy here. Could this be one of those superintendent's stunt?
Could it be that both of them are so ignorant that they could not see what was coming and that is why they kept it a secret?
Also, board members who are so loyal to the superintendent shall leave their seat for someone else who could do a better job, and really look up for our children's education. If I am not wrong the superintendent's contract will expire soon. I said do not renew it, but again I doubt it because they will not do what is right four our district; they are friends of the superintended, and when this happens it is time to go and let someone else do the job.
Furthermore, they knew this and went ahead and open another middle school, and did not bother to close the old one. This is really ridiculous. No wonder our district is going down.

The City of Menlo Park wants the two Ravenswood schools, Willow Oaks and Belle Haven Elementary, that are located in Menlo Park. Why doesn't Ravenswood justy lease them out to Menlo Park for some much-needed funds?

Report Objectionable Content
Email Town Square Moderator
12 people like this
Posted by Joey
a resident of East Palo Alto
on Jan 26, 2018 at 1:11 pm

East Palo Alto (a 2.64 sq miles city) has 9 schools in their district, office buildings, etc. Time to downsize and combine schools. The Cesar Chavez Academy campus is massive (Bigger than most Menlo Park and Palo Alto school campuses), you can easily combine Costano and Brentwood schools there. As for the remaining schools, they can easily sell the land to for millions!

Report Objectionable Content
Email Town Square Moderator
19 people like this
Posted by Helen
a resident of Mountain View
on Jan 26, 2018 at 1:47 pm

The first order of business should be to get rid of Chief Innovation Officer Maurice Ghysels [portion removed.] A study of the many districts he bounces around from will show his tenure always precipitates a financial crisis.

Maurice Ghysels is adding a great deal to Ravenswood. I'm not sure if the poster knows him, but it's wonderful that he's added his expertise at no cost to the district.

Marielena Gaona-Mendoza is simply not capable of adding anything to the board. The PA Weekly staff has to have known, based on her incoherent comments at PAUSD board meetings and long history of being let go by school districts as an employee, including Ravenswood, that she would not be a good board member.

It's not really fair to pin this on the Weekly. While Palo Alto residents Ken and Michelle Dauber endorsed Gaona-Mendoza, I can't find anything showing that the Weekly did. Web Link

Before being elected, the Weekly reported that Gaona-Mendoza promised that she would make sure that every issue gets followed through. Web Link

The Weekly is reporting that Gaona-Mendoza, while admitting she was aware of the declining enrollment, did not feel staff had been transparent with the board about how severe the shortfall was.

But there had been repeated warnings about the district's financial condition as the Weekly's article shows. The last 4 budgets the board approved had deficits all 4 years.

To buy Ravenswood time to find the best path forward, three board members voted to give district employees notice that some of their jobs may need to be cut to save money. Gaona-Mendoza voted no to that.

Why does this district have such a high budget/cost per student? Class sizes are fairly high, SPED services are provided in a model of service that minimizes cost. Compare the yearly budget of this district with other districts in the state with comparable numbers of schools and students and you'll see this is rather high. Doesn't the federal government pay for title 1 lunch programs? Here are are some statewide statistics on cost by district.

Web Link. Where is all the money going?

Who owns the property under Ravenswood Schools Campuses? Land in East Menlo Park is worth a fortune because Facebook is buying everything in sight of Willow Road. Can the district close campuses and sell the land?

From the owner of LV Mar and La Viga, a Palo Alto restaurant inspired by Mexico City
By Elena Kadvany | 4 comments | 3,814 views

Can you Pay to Reduce your Carbon Footprint?
By Sherry Listgarten | 10 comments | 2,659 views