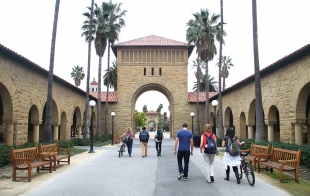 Stanford University, one of the region's largest landowners, is looking to add more facilities to its campus to accommodate more than 9,000 students and faculty expected arrive in the next 17 years. Photo by Veronica Weber.

The article claims, "Stanford has largely upheld its policy of 'no net new trips.'" Wrong!

What the article doesn't explain is that the policy doesn't mean what it says. Stanford doesn't count vehicles that drop people off or pick people up from the campus as "trips." Stanford doesn't count vehicles that park off-campus, even though they may cause just as much impact on neighborhoods. Stanford then lowers its counts by buying credits from other organizations. Those organizations may spend money to reduce traffic in areas far from Palo Alto but with no impact on our city. So the actual number of trips to and from Stanford may be going up and up and up -- but Stanford gets to claim otherwise.

We need full and honest reporting on Stanford's true traffic. Every car entering and leaving campus should count. A diligent effort to include cars parking off-campus is needed. All studies should be conducted by independent contractors not hired by Stanford. Stanford shouldn't be able to claim any credits for off-campus efforts. All studies should be open and fully-documented and the dates when surveys are done made public.

Then, and only then, should we even consider Stanford campus expansion.

If we de-annexed Stanford, we'd solve our jobs-housing kerfuffle immediately. Why should Palo Alto ruin itself for a problem Stanford created? Let Stanford face ABAG.

Report Objectionable Content
Email Town Square Moderator
11 people like this
Posted by cosy with developers
a resident of Midtown
on Jan 18, 2018 at 10:58 pm

Stanford developers are just as aggressive and dishonest as lots of other developers around town. They wrap themselves in the University aura but are just as greedy and dishonest as the worst of them.
The development team uses their prior connections with city officials, and with the Chamber of Commerce. Just watch Liz Kniss get all smiley and cozy with some of them at the Council.

Report Objectionable Content
Email Town Square Moderator
4 people like this
Posted by Curmudgeon
a resident of Downtown North
on Jan 19, 2018 at 1:44 pm

But too much of the nuisance part is in Palo Alto.

Tough luck, Curmudgeon. You, cosy with developers, Joe, karen. Cheryl, Eric, Tom and the rest can huff and puff all you want.

BTW curmudgeon, You have no problem with all the tax revenue from the nuisance shopping center that pours into palo alto coffers. Karen doesn't.

"BTW curmudgeon, You have no problem with all the tax revenue from the nuisance shopping center that pours into palo alto coffers. Karen doesn't."

Alright, alright. If it means that much to you and Karen we'll keep the shopping center.