Three Seasons restaurant fire went up to the roof 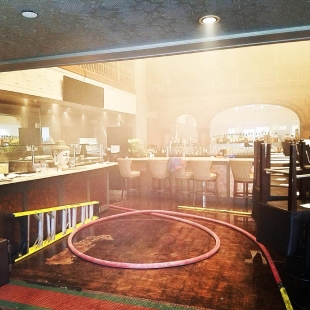 Good luck to Three Seasons in getting everything repaired. We're sorry for the fire. You are one of my favorite
restaurants in Palo Alto, you always provide delicious food and a beautiful atmosphere. We will miss you while you are closed.

This is one reason why "mixed-use" buildings like housing over restaurants & grocery stores is a bit scary. The other reason are rodents and roaches like residents living in condos on CA Ave have experienced.

Karma. 3 Seasons owner is the one always calling noise complaints on the restaurants nearby. Source: the officers who had to keep going out on these nonsense calls.

Report Objectionable Content
Email Town Square Moderator
9 people like this
Posted by Dave Hoffman
a resident of Crescent Park
on Jan 17, 2018 at 12:25 pm

I think your understanding of karma differs from mine, 'Zap'.

I find it hard to believe your accusation knowing the chef/owner of Three Seasons as I do. Besides, what nearby restaurants might be making too much noise? The few seats in back of the Old Pro? Please.

Instead of taking pleasure in this incident, perhaps we all could simply be grateful that nobody was hurt in the blaze?

I wish the Three Seasons team luck with repairing their kitchen and reopening soon--I can't wait to visit them again, to support a long-standing local business, and to enjoy John Le's wonderful take on Vietnamese food!

Report Objectionable Content
Email Town Square Moderator
4 people like this
Posted by Sea Reddy
a resident of College Terrace
on Jan 17, 2018 at 2:32 pm

I was going leftt on Hamilton ave and Bryant
Fire departmentc was in action.
They did a superb job.
It was surreal.. Like watching on TV.
I thank them for what they do.

Best luck to Three Season restaurant. I enjoyed their food as well as the ambience, and hope their amazing interior remain intacted.