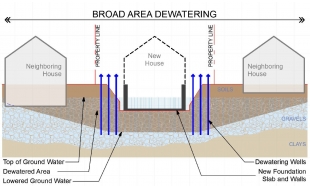 Broad-area dewatering, illustrated in this diagram, typically requires builders to pump out millions of gallons of water from the underground aquifer to enable basement construction. Diagram by Save Palo Alto's Groundwater.

long view is a registered user.


So the cutoff wall stays in place permanently? Any downsides to this?

This ENTIRE issue of de-watering as damaging is utter bunk.

Entirely an emotional issue having to do with old Palo Alto residents vs new Palo Alto real estate reality.

All of the arguments that shallow temporary residential de-watering somehow damages trees or adjacent properties is simply fear mongering. There is no real science involved...just vague references to non-existing terrifying conditions that result from dewatering.

Slurry cut off walls are ridiculously expensive and problematic. Requiring them is simply a means of running the construction costs up so high that it discourages basement construction. Be honest now...this is the real reason they were promoted.

Again...this is a bunch of fear mongering by those who are against a larger home replacing a smaller one. Old vs New.


Report Objectionable Content
Email Town Square Moderator
25 people like this
Posted by Novelera
a resident of Midtown
on Jan 12, 2018 at 2:47 pm


@Civilized Engineer: I bought my house in 1982. I replaced the toilet 3 years later. That toilet now will not hold a seal. Palo Alto Plumbing has been out twice. I have to put wood shims there or feel like I'm on a bucking bronco when seated on the toilet. Palo Alto Plumbing agreed that my house had a slope that was doubtless caused by groundwater loss.

I have three exterior doors. I had the same dead bolt locks in there all these years until about 3 years ago when four basements were dug on my street. The dead bolts were not going into the hole in the door because the house has shifted. My son had to come out and fix all these locks. I was afraid I'd eventually be locked out when the dead bolt got well and truly stuck into the wood.

I have huge cracks along where the top of a couple of walls meet the ceiling. Again, all in the past three years.

A large Chinese elm in my front yard looks very sickly and one branch looks like it's about to fall off.

Report Objectionable Content
Email Town Square Moderator
10 people like this
Posted by Wondering
a resident of Duveneck/St. Francis
on Jan 12, 2018 at 5:19 pm

When we moved in (edge of flood zone) we were advised no basement was possible. Lo and behold, a nearby house mire in the flood zone builds one with associated tremendous de-watering. The basement square footage is not counted in the assessed value of the property, so the owners don’t pay for that. Not sure if the change in aquifer nearby is meaningful or not. Some clain meighbor trees may suffer, etc. -

Report Objectionable Content
Email Town Square Moderator
2 people like this
Posted by Real Engineer
a resident of Duveneck/St. Francis
on Jan 12, 2018 at 8:31 pm

Report Objectionable Content
Email Town Square Moderator
10 people like this
Posted by Bill Bucy
a resident of Barron Park
on Jan 13, 2018 at 9:35 am

Bill Bucy is a registered user.


Cracks and misaligned doors in our 92-year-old, stucco, lath-and-plaster cottage have always varied depending on the amount of rainfall. For instance, last year's rains helped close a few as the ground, and presumably the underlying water table, were seriously replenished and our aging perimeter foundation floated a bit.

This makes me think that the effects of pumping to create a basement would have the greatest impact on nearby structures -- if there was any impact. Therefore, I think any rules, regulations, incentives, etc. governing on pumping should focus on how already built structures might be affected rather than broader water table issues.

Report Objectionable Content
Email Town Square Moderator
13 people like this
Posted by Neighbor
a resident of Midtown
on Jan 13, 2018 at 9:39 am

Civilized engineer should visit the site on Ross Road/Colorado Ave and look at the house next door to the basement construction.You can see the obvious damage. Armchair opinion is not sufficient.

Report Objectionable Content
Email Town Square Moderator
14 people like this
Posted by winter
a resident of Barron Park
on Jan 13, 2018 at 10:59 am

Thank you to Save PaloAlto's Groundwater and especially to Rita Vrhel for taking on this vital issue. And thank you PA Weekly for your great article on it - good job Gennady. The chart was alone worth 1000 words as it compared the approximate 100 million gallons of water of wasted water pumped from just 6 developments that was dumped into our storm drains, compared to 3 developments that used cutoff walls - zero gallons discharged and wasted. Now the City must, in its policies and practices, be assiduous in perfecting saving and recycling our water.

Take a bow - you water savers have served your City and residents well. You are an example of what all of us can do when we organize around an issue that needs to be addressed. We don't need to wait for someone else to show leadership, or hope the right person gets elected, or the staff will notice. We each can lead and we all can work together on issues that matter to us to make our city better.

"Slurry cut off walls are ridiculously expensive and problematic. Requiring them is simply a means of running the construction costs up so high that it discourages basement construction."

Anybody who can afford to buy and clearcut a perfectly good house to build a macmansion can easily afford to protect their investment with a slurry wall.

Has Civilized Engineer ever calculated the buoyancy force lifting a basement surrounded by water? Do it on a per square foot basis for a range of submergence depths. Show your work.

Report Objectionable Content
Email Town Square Moderator
2 people like this
Posted by Reason
a resident of Old Palo Alto
on Jan 13, 2018 at 10:13 pm

Wonderful. The tinfoil hat crowd is afraid of water sprites, and has convinced government to add regulations to jack the cost of building.

It’s like a stupid tax that everyone else pays.

Winter-
you are absolutely right: the success that savepaloaltoground.org has had is directly tied to Rita Vrhel and Esther Nigenda's tenacious, persistent organizational and research skills. They were part of savepaloaltoground.org long before I was. Their untiring and inclusive approach to community engagement is inspiring.

@Civilized Engineer -- If you remove 22 million gallons of water from the soil -- equivalent to 1000 swimming pools of water (just imagine that) -- it will definitely have an impact on the soil under nearby homes. It's just a debate over how much impact, and what you can get away with.

Report Objectionable Content
Email Town Square Moderator
1 person likes this
Posted by Anon
a resident of Another Palo Alto neighborhood
on Jan 17, 2018 at 10:48 am

Maybe I missed it, but, I didn't see in the article or discussion any actual costs. Just how "ridiculously expensive" additional cost are we talking about for a cutoff-wall for a, let's say, 1000 (2000, 3000, pick some numbers) square foot basement?

Report Objectionable Content
Email Town Square Moderator
3 people like this
Posted by CivilizedEngineerisCorrect
a resident of another community
on Jan 25, 2018 at 9:37 am

From an engineering perspective it seems the general residential distress reported by others commenting here is very typical of seasonal expansive soil movement which is endemic to the area- this should not be confused with localized drawdown of the water table around a basement. The regional water level has been fluctuating for hundreds of thousands of years... Also, dewatering does remove water locally, but it goes right back into the water cycle via the City storm drain- this really does not remove water from the system as a whole. And if the noted residential distress IS due to the expansive soils, then it is interesting to note the drawdown in a clayey soil will be limited and will occur closer to the excavation (versus in a sandy soil where the water table can be drawn down farther away from the excavation). So if it's expansive soils causing your distress, then the chance of the dewatering from a basement excavation in the neighborhood impacting the water table on your property would be less.

Cut-off walls can be very effective, but there is still a need to dewater within the excavation and there can be water intrusion from outside the wall too depending on geologic conditions.

'Are they ready for fully innovative Indian food?' Ettan arrives in Palo Alto with chaat, caviar and a secret menu
By Elena Kadvany | 0 comments | 3,701 views

Flying: How to lower your impact
By Sherry Listgarten | 12 comments | 2,626 views