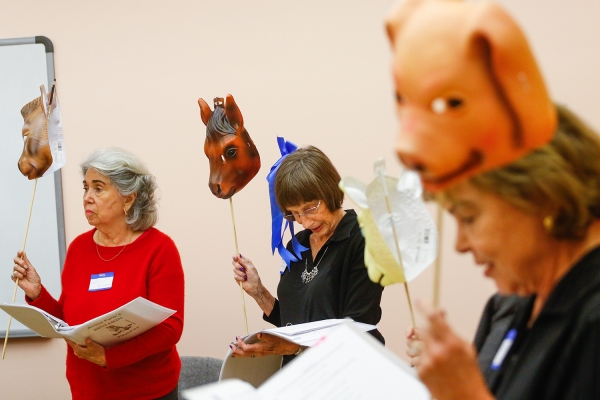 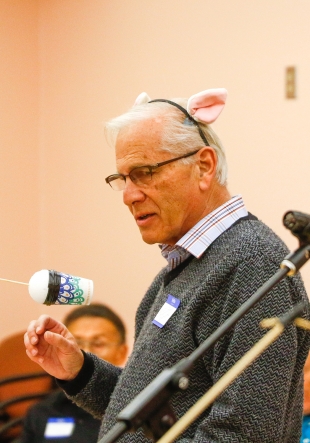 Sanford Davis, playing the role of Major, rehearses a scene from "Animal Farm" at Avenidas on Nov. 20, 2017. Photo by Veronica Weber.

When the 15 actors starring in Avenidas' staged reading of George Orwell's "Animal Farm" take to the stage this month at Cubberley Community Center, they will be bringing more than their acting skills to tell the satirical tale of Joseph Stalin's Soviet Union. All of the actors, except one, are retirees over age 55 who grew up with the Cold War and fear of Russians.

"We've lived through this. ...The wisdom of these cast members goes into their voices," said Enid Davis, who directed the Wise Owl Players storytelling troupe at Avenidas that will be performing the classic tale — adapted for the stage by Ian Wooldridge — on Dec. 16 and 17.

Freedom, manipulation, obedience and truth are among the themes in the 1945 barnyard novella meant to an allegory for the Soviet Union, with animal stand-ins for Stalin and ordinary workers.

Davis's cast of retirees — including a nurse, teacher, psychiatrist and cardiologist — use masks and other simple props while playing the various barnyard animals. There's Napoleon, a pig trying to consolidate his power; Squealer, a propagandist; Boxer, a horse who just wants to work hard and believe what he is told; and Benjamin, a cynical and stubborn donkey.

Pianist Audrey Albin adds musical mood touches as well as accompaniment to the song "Beasts of England," sung to the tune of "Oh My Darling, Clementine."

Davis, a professional storyteller and writing teacher, works with local schools, libraries and senior centers to provide storytelling programs. She organized the Wise Owl Players storytelling troupe at the nonprofit senior agency Avenidas as part of her theatrical-stage-reading program, which doesn't use sets or elaborate costumes. The student-actors, who often remain seated throughout the performance, read from a script, using voice and body language skills learned over the six-week program.

Henry Lew, who plays Boxer, said participating in Davis's staged readings have given him an opportunity to catch up with the arts after spending a long and all-consuming career in medicine. In addition to "Animal Farm," he recently had a role in the musical "Jeans!" co-written by Davis and performed last August at the Moldaw Senior Residences in Palo Alto.

"I was a premed at Columbia in the '50s and everything was science," Lew said. "You didn't dare take English literature or anything that wasn't a science course to help you get into medical school.

"There you are in Manhattan — surrounded by art, music, literature, opera and everything — but you have no time at all. So I'm doing it now, in my 80s."

Palo Alto resident Taffy Hoffman, who plays Moses, a raven who speaks of an animal afterlife in a better place called Sugarcandy Mountain, said the staged readings have allowed her to try acting for the first time since high school and early college.

"That was a really long time ago," Hoffman said. "I couldn't memorize lines any more at this point, at my age. But this is just reading."

Cast members Naomi Lavori of Stanford and Sandra O'Neal of Palo Alto said they heard about the "Animal Farm" production through a creative writing class that Davis also teaches at Avenidas.

"I was telling my granddaughters about this play and the 15-year-old said, 'It sounds like contemporary politics," said O'Neal, a retired nurse practitioner who plays Snowball, a boar who wants to improve the lives of his fellow animals.

"It's wonderful stuff. I wish it weren't so timely. You could just erase the date and write '2017,'" said Lavori, who plays Benjamin the Donkey.

Lavori said she doesn't have many lines, but the lines she does have are good: "All animals are equal, but some are more equal than others," is her favorite line, she said.

While audience members are likely to extract contemporary parallels from the story in today's politically polarized environment, Davis said the group is going to let the audience decide what it's about.

"We don't want politics to be a major part of this at all," Davis said. "This is the older generation giving a gift of wisdom and consciousness. This is a story to consider."

>> "We don't want politics to be a major part of this at all,"
>> Davis said. "This is the older generation giving a gift of
>> wisdom and consciousness.

If you don't think politics is a major part of everything these
days, then I am not sure I am as interested in seeing this as
I thought reading about it.

Today the weapon of mass destruction is money rather than guns,
but one does not have to live in a totalitarian dictatorship to
learn how power corrupts, and absolute power corrupts absolutely.

Check out "Why Orwell Matters" by Christopher Hitchens

CarolB is a registered user.

Enid is a registered user.


"We don't want politics to be a major part of this at all," Davis said. "This is the older generation giving a gift of wisdom and consciousness. This is a story to consider."

This quote was garnered in the context that we are presenting Animal Farm: A Fairy Story in the original state with no parody or references to American politics of 2017. We are honoring George Orwell's fable as a story for all times. It's a universal politics or way of life. A story to seriously consider.

Report Objectionable Content
Email Town Square Moderator
4 people like this
Posted by Income inequality
a resident of Atherton
on Dec 6, 2017 at 4:37 am

"We don't want politics to be a major part of this at all," Davis said. "This is the older generation giving a gift of wisdom and consciousness. This is a story to consider."

Do not want to offend those Trump snowflakes!

Can you stay healthy without making more trash?
By Sherry Listgarten | 6 comments | 3,021 views

Think about helping others in our coronavirus-affected area
By Diana Diamond | 7 comments | 2,765 views

The University of California’s flexible policies during COVID-19
By John Raftrey and Lori McCormick | 5 comments | 1,042 views